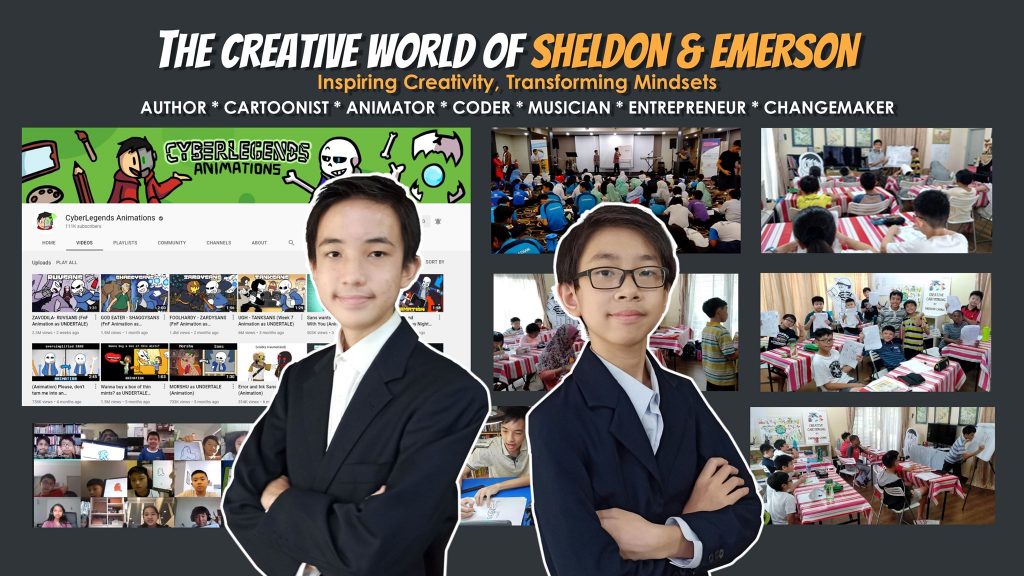 When their parents saw their affinity for doodling, when they were just toddlers. Sheldon, 15 and Emerson, 13, were given pens and papers to draw and express themselves. Drawing became a form of play and entertainment for them. Growing up, their parents created a safe and nurturing environment where their passions and interests were supported. When it came to art, the boys were given art material, they visited art galleries and even had chats with artists and cartoonists.

We had the opportunity to meet various people, like artists, cartoonists and animators. By speaking to other people with similar passions, it gave us a different perspective. It was inspiring and it helped us to grow and expand our knowledge. – Sheldon Chong, 15 years old

With an array of interests to explore, the boys were particularly drawn to game development, coding, animation and comic drawing. It gave them an avenue for creative freedom and challenged their ability to think critically.

From Interest To Imparting Knowledge To Others

The best way to learn is to teach others what we know. True to this saying, the boys decided to take learning a step further started conducting workshops. Emerson was only 7 years old when he did his first workshop. The idea of designing and hosting workshops stemmed from watching their father in action as a workshop trainer.

My father is a trainer and he’s been conducting training programmes for many years. He would bring us to some of his training sessions. Sometimes we watched him and sometimes we did drawing demonstrations and spoke on specific topics. I remember a time when he was speaking and we were illustrating what he was saying to the participants. – Sheldon Chong

With a lot of mentoring and guidance, both Sheldon and Emerson grew in confidence and clarity on the subject they were teaching – cartooning and comic drawing. They made it their mission to inspire creativity and transform mindsets.

We started building confidence and got used to speaking to a live audience. We did drawing demonstrations and talks. And then, we had the idea of conducting workshops for children and teens. We wanted to share our passion and hope that their passion will also be ignited. – Emerson Chong, 13 years old

Levelling Up Virtual Learning For Children And Educators

With the learning challenges brought about by the pandemic, online learning is here to stay. Both students and educators have to get used to technology and harness the best benefits of virtual learning.

Both Sheldon and Emerson, like many children, find digital games to be very interesting and fun! With the passion in creating digital games and conducting training workshops, they decided to merge both interests and the need to improve the online learning experience.

In early 2022, Sheldon and Emerson organised a couple of free workshops – ‘Create A 2D Virtual Game and Create A Gamified Virtual Classroom’ catered for children and educators respectively [1]. It was their first attempt to reach out to an audience of more than 100 people.

Usually, our workshops are customised and personalised for small groups. This was our largest so far for an adult workshop.– Sheldon Chong

The workshop gave children a chance to learn how to create their own virtual game using a software called Gather.Town.

Meanwhile, the educators  learned to create and gamify a virtual classroom using the same software. The boys trained them on how to use and maximise technology for teaching. It was their way of redefining learning from the usual passive remote learning as the software provided the perfect ground to stimulate more students’ engagement and interaction due to its immersive nature.

For the educators, we shared with them some educational tools that could be integrated into their lessons to gamify them. We also showed them how to use the whiteboard and certain settings in the virtual classroom. – Sheldon Chong

Both workshops received overwhelming praise and applause from the parents of the children, educators and  their school principal who also attended it.

One parent commented that their child who used to spend his time playing games now was so inspired, he spent 5 hours creating games after the workshop. This is a good example that children can learn fast when they are inspired. – Emerson Chong

Even the educators were eager to showcase the virtual classrooms they created and wanted to explore the other features of the software to improve the online learning experience for their students. In their feedback, many of the educators said that they would like to implement it during their online classes and meetings.-Sheldon Chong

Thrilled with the feedback that they received, Sheldon and Emerson are determined to continue along this path of organising more workshops in the future to inspire others.

The glue to great success is the cohesive teamwork between the sibling duo. While Sheldon was the host, Emerson was invited as a guest speaker. Not just that, he was also handling the chat and on his feet when it came to troubleshooting technical issues for this workshop.

Creating videos is no easy feat and it takes up a lot of time. For his latest animation, Emerson spent more than 120 hours creating and editing the 3-minute video. He credited Sheldon for playing a role in assisting him to perfect his animated videos.

For the first year or so, I used to do all my animations by myself. The video editing, the line art, the colouring – description, thumbnails, everything. – Emerson Chong

Soon, Emerson worked with Sheldon on the nitty-gritty parts of the animation.

Now, Sheldon is helping me with the thumbnails, the background as well as the planning for the animation which is great. It really helps me to speed up the work. – Emerson Chong

With the burden lightened and the synergy between both brothers strengthened, the boys are determined to create better videos at a faster rate.

I’m the background artist, I do a lot of drawing for the sceneries and where the characters are set at. I also help with the planning and the video thumbnail.  For the latest video,  I decided to go a bit overboard, I put a lot of shading and lighting. But I’m quite proud of the result because it was the most visually impressive animation we have created so far. – Sheldon Chong

An additional perk that comes with working with a brother is that they have each other to bounce off ideas.

We both have different kinds of perspectives on certain things and we find it useful to discuss them. We don’t fight or have arguments over nothing, but we fight when there are creative differences. We argue and discuss how to make the output better. – Emerson Chong

Their harmony as a team had recently earned them the winner of the Young Educators Challenge organised by Project ID in 2021. They are also two-time finalists of The Tuanku Bainun Young Changemakers Award for their work in making social impacts through their workshops, animated videos and educational illustrations.

The World Is Their Oyster

With the nation moving out of a pandemic, the boys will be hosting a physical workshop on 2D animation and comic drawing soon. For Sheldon, his future plan includes releasing more original games on itch.io. They also have plans to write and illustrate more books to add to their current published collection – ‘The Time Dimension’, ‘The Elementals’, ‘Attack of the Evil Clone’ and ‘Egypto’s Adventure’.

Previously, 40% of the sales from their books were channelled to Ariya Vihara Buddhist Society to aid the organisation’s charity works[2].

For Emerson, his five-year plan includes reaching up to 1 million subscribers on his Youtube channel and, down the line, enrolling into an animation school.

I never knew animation was going to be my passion and Sheldon thought the same about game development. But it is! And we want to continue improving our skills and be better at it. – Emerson Chong

The brothers’ maturity and drive is a result of great parenting as they both testify. Young as they are, they are just starting on the journey of success as they continue to craft it – a journey they will be proud of and can call their own.

To those who are second-guessing what you can give and doubting your credibility because of your age, Sheldon and Emerson’s motto may be of use:

Find your passion, follow it, stay creative and don’t let your age be a limit. – Sheldon and Emerson Chong