“Where there is a flood, I’ll be there to help” – Abang Viva, The True Icon Of #kitajagakita #rakyatjagarakyat 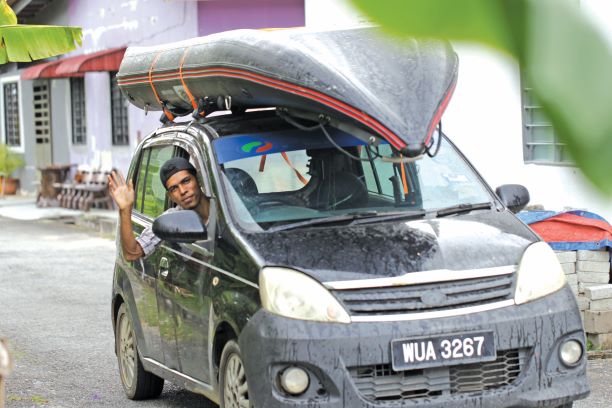 Within a short span of nearly three months, Malaysia has seen four occasions of flash flooding. The first was the unprecedented flash flooding that hit a large area of Selangor in late 2021 and 8 other states in Malaysia. This is followed by a flood that affected six states including Sabah in early 2022.

Floods in Malaysia have become a common occurrence. But they never cease to affect the livelihoods of many Malaysians and tug the heartstrings of many.

The third flash flooding that Malaysia experienced was on the East Coast of Malaysia. The states of Terengganu and Kelantan are no stranger to floods brought about by monsoon. But, the flood that hit in February 2022, was out of the ordinary. The sudden flash floods left nearly 20,000 people displaced and two fatalities[1].

The floods this time were a bit out of the ordinary as they are outside the regular monsoon season. However, it is surprising that there is no readiness by the state government as MetMalaysia had issued a weather forecast since early February saying that the weather in Terengganu is not as usual. – Wan Muhamad Haikal Wan Ghazali, Terengganu Parti Keadilan Rakyat Youth deputy leader[1]

If #daruratbanjir received spotlight and massive social media coverage, the flood on East Coast has received a subdued reception. But there’s one man who is always on his feet when it comes to helping flood victims.

Azwan And His Trusty Old Viva

Azwan Omar, 30, a dude from Malacca rose to prominence for playing a part in his flood relief efforts during the massive flood that hit Klang Valley. Fondly known as “Abang Viva” by netizens and locals, his decision to help was spontaneous at first.

When I saw on the news that many flood victims were stranded, I wondered why I, who had a boat, did not help in flood relief. From there onwards, I decided to help out in ways that I could. – Azwan Omar[2]

He travelled in his family car, a Perodua Viva with a boat tied to the roof and RM50 in his pocket from Malacca to Puchong. The spur of the moment decision was led by Azwan’s belief that everyone has a choice to help on any given day.

We are constantly faced with choices. For example, if there’s food in front of us, we have a choice to eat it or not eat it. It’s the same thing when it comes to helping, we can choose to sit still, to help out on the ground or only to contribute with a donation. The choice lies with us, and we have our capabilities when it comes to helping. – Azwan Omar

When he was on the ground with the rescue team and frontliners, his initial plan of staying for a day extended. The flood relief mission brought him next to Pahang based on the plea for help from the locals in Temerloh.

The first location I went to was Puchong before going to Sri Muda, Shah Alam. I rely on the information provided by the locals or other groups of volunteers. I travel to locations where there’s limited help and try to rescue as many victims as possible to get out of the affected areas. – Azwan Omar[3]

Despite the attention he garnered and the viral videos online, Azwan remained humble and was constantly pointing out that it wasn’t his effort alone when it comes to rescuing and helping the flood victims.

My contribution is not much compared to others. Some I know came from Penang and rented a lorry to bring fishing boats to help flood victims. – Azwan Omar[2]

Where There’s A Need, There’s Azwan

During the flood in Terengganu and Kelantan, Azwan travelled to the East Coast to assist the flood victims to the best of his ability. When asked what differs between the recent flood and the one that hit the Klang Valley and Selangor late last year – it was preparation.

The flood victims in Kelantan and Terengganu have lived with floods for a long time. It happens every year to them. Most villagers own boats at home and usually when a flood takes place – they know what to do. Neighbours would band together to help less fortunate neighbours, rescuing them with their boats. Even the police officers have boats readily available at the stations. – Azwan Omar

With floods being a common occurrence on the East Coast, the folks and authorities are well-prepared. This led to faster rescue missions and aid distribution compared to the Klang Valley flash floods.

Based on my experience on the ground, the Klang Valley flash flood was severe because it was sudden, and many were unprepared.– Azwan Omar

When asked whether his help would solely be for flood victims, Azwan commented:

The advantage I have currently is that I own a boat and my strength. So, I channelled my ability to help the flood victims. But, when I see there’s a need for help, if I have the right equipment, I would help out too. It’s not exclusively for flood victims. – Azwan Omar

Getting Used To The Limelight

Since being exposed on social media and making newspaper headlines, Azwan is still getting used to the sudden attention given by the general public. In the past, many have suggested him to be conveyed Datukship, lauded as hero or tokoh amongst the community but Azwan thinks otherwise.

Since being recognised by the public, the amanah (trust) they have or carry towards me has been quite high. I’m afraid that I won’t be able to live up to it. The more recognition I get, the more it would affect me. – Azwan Omar[3]

Local communities he visited often offered him a place or were willing to sponsor him accommodation to stay – but he had refused and preferred to sleep in his car. Members of the public have also wanted to donate to support him in his efforts but Azwan declined those offers.

I’m still capable, I am working and I have an income. Public donations for myself, I would reject but there are still donations given by the members of the public. The money then I would use to purchase necessities for the flood victims who didn’t evacuate. – Azwan Omar[3]

Desire To Help Because He Was Once In Need

To Azwan, what propelled him to continue helping the flood victims is that he used to be in a position where he was in-between jobs and relied heavily on his family. During these dark times of instability, no other help was provided to him. Deriving from this feeling, he didn’t want others being faced with a crisis to feel neglected and left without proper help.

I’m used to living in hardships. Now, that I have more facilities and relatively stable life. I don’t want others to feel the same way as I did, especially those who were hit with hardships like the flood victims. Maybe, this is also what other volunteers, NGOs and frontliners feel too when they help others. – Azwan Omar

Azwan, who had only so little when he travelled to Puchong, is living proof that helping those in need doesn’t require a huge amount of money. Azwan believes that helping is a combination of intention and taking action.

Others are also capable of doing what I am currently doing. It’s just a matter of yes or no and it’s based on one’s intention. If you intend to help others, even without a boat, you’ll find a way to help. Even if you own multiple boats at home, if you don’t intend to do it – there will be no action. – Azwan Omar

Azwan was awarded a Certificate of Appreciation by the Department of Fire and Rescue Malaysia (JBPM) for his flood relief works during #daruratbanjir[4]. He was also selected to become a volunteer member of the Malaysian Civil Defence Force (APM) Melaka where he attends safety and emergency courses to enhance his relief and rescue efforts[4].

Aside from recognition, Azwan was gifted a Mitsubishi Triton by a cosmetic entrepreneur, Wan Siti Aisyah Wan Hasan. His new vehicle can now go further and faster and it was also the vehicle seen in the recent relief effort in Terengganu[5].

There might have been changes in his life since December 2021, but Azwan is still a filial son to his parents, asking for their blessings and permission before leaving. He is motivated and determine to continue in his mission to be of help to those in dire need.

Where there is a flood, I’ll be there to help.– Azwan Omar

The East Coast flooding may have receded and evacuation centres have closed down. But find out more about how you can help to rebuild the lives of the affected flood victims in Terengganu and Kelantan by checking out our guide.