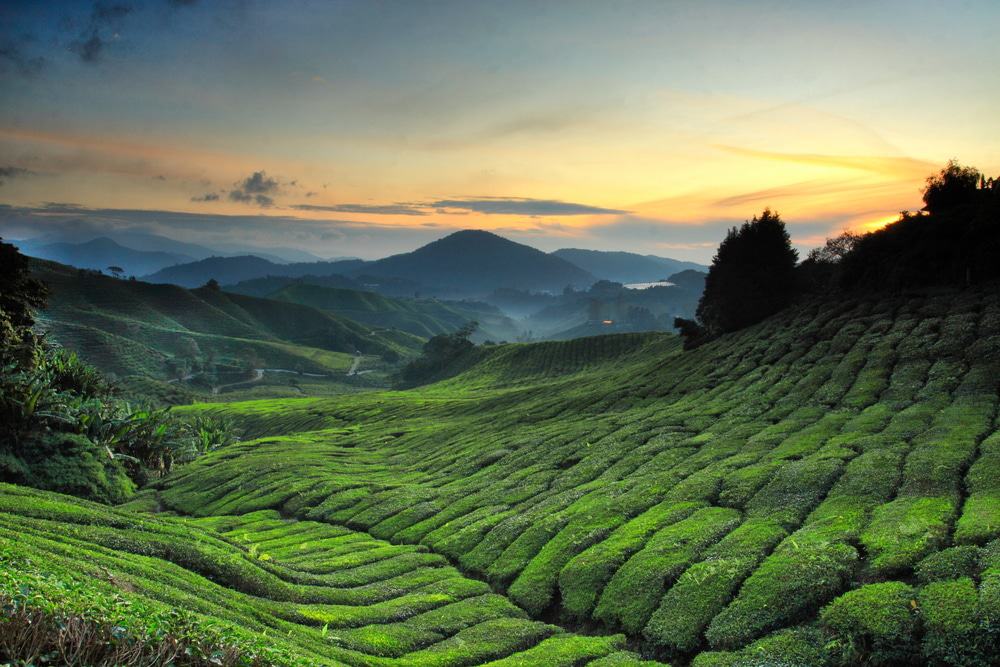 Cameron Highlands in Pahang was once a tourist hotspot in decades past. But climate change threatens to end its position as a prime tourist destination.

Let’s take a trip down memory lane and look at the history of Cameron Highlands, how it became one of the prime vacation spots in the country and how a warming world is changing it for the worse.

Birth Of A Resort

Cameron Highlands was discovered in 1885 by English surveyor William Cameron, who also lent the region his name and his companion Kulop Riau, under a commission by the colonial government to map out the Titiwangsa Range[1]. Forging a path through dense vegetation, he reached a magnificent and sublime plateau “shut up in the mountains” along the vast Titiwangsa Range[2].

But it wasn’t until Sir George Maxwell visited the region in 1925 that its development as a hill resort began. There, Sir Maxwell decided to develop the present Tanah Rata and Brinchang areas into a Hill Station (a town located at a higher elevation than the nearby plain or valley)[1]. From there, the region soon became a haven for the British stationed in Malaysia, looking for relief from the hot and humid tropical climate. Many of them had also decided to make Cameron Highlands their retirement home, setting up bungalows and mansions[1].

British planters had also discovered that the climate and fertile soils of the mountain slopes were suitable for growing tea. It was here that John Archibald Russell established the famous BOH tea plantation in 1929. Cameron Highlands still remains the largest tea-producing region in Malaysia, as well as being a major supplier of vegetables and legumes for both Malaysia and Singapore[1]. It is also the centre of strawberry production in Malaysia – with strawberry farms making up an iconic part of the region’s landscape[3].

Cameron Highlands is also a popular tourist destination, supporting a population of close to 50,000 people spread over eight interconnecting areas[2]. Tourists, both local and foreign, have visited the region to tour the plantations, admire the Tudor-style buildings and experience the cool cloud forest environment.

But lately, the resort has been threatened by a number of factors.

Over the past decades, Cameron Highlands has been subjected to uneven development, with large tracts of its cloud forests being cut down to make way for infrastructure, housing or agricultural developments, most of the time illegally. As a result of this illegal deforestation, large stretches of mountain slopes are now bald, with their soils exposed to the elements[5].

The greed and corruption driving this deforestation led to tragedy in 2014 when mudslides and landslides struck Kampung Raja, Ringlet Town and Bertam Valley on November 5th 2014, resulting in 5 deaths and the displacement of numerous families from their homes[6].

In September this year, another landslide caused by illegal deforestation occurred near Kampung Raja, leaving the residents worried and uneasy[7].

The Threat Of  Warming Temperatures

The over-development of Cameron Highlands, together with ongoing climate change, has led to the region losing its characteristically cool climate, with minimum temperatures increasing by 7.5°C over the past three decades[8], much to the detriment of both the residents and visitors.

In the summer of this year, the Meteorological Department recorded temperatures between 16°C and 23°C, far higher than what people expected[8].

Forests help regulate the temperature. However uncontrolled land clearing would lead to soaring temperatures, not to mention other environmental damage, such as floods and landslides, which are already happening. – Roy Margaret, Regional Environmental Awareness Cameron Highlands (REACH) committee member[8]

Visitors coming to the highlands to escape the heat found that the heat had followed them to their dismay, prompting them to switch out their sweaters and jackets for short-sleeved shirts and shorts. Many resorts have even started installing air conditioners in their rooms in order to combat the uncharacteristic heat[8].

Tour guide Angela Marine Hoon, 65, said that people had never needed fans or any other cooling system during her 38 years of experience[8].

It used to be so cold here that going to Cameron Highlands was like visiting any cold European country. Nowadays, some visitors even ask if the hotel has fans installed in the rooms. – Angela Marina Hoon, a tour guide[8]

The rising heat also spells trouble for many of the crops growing in the highlands, especially the famed strawberries.

People have noted that strawberries from Cameron Highlands are smaller and sour, compared with the imported ones. – K. Kaliyannan, a tour guide[8]

Strawberries thrive in temperate climates, and the cool mountain slopes of Cameron Highlands provided such an environment conducive to growing big and sweet strawberries. But with temperatures rising above 23°C, the yields of the region’s most famous fruit are being negatively impacted[8].

With strawberry yields declining, many sellers have even resorted to buying imported strawberries and stingless bee honey from elsewhere before reselling it in Cameron Highlands[8].

We can see many vehicles even on weekdays, and traffic congestion in some parts of Cameron Highlands is now very common. Can you imagine how much greenhouse gases that come from running engines? – Angela Marina Hoon, a tour guide[8]

Even with these clear problems, the development of Cameron Highlands still continues.

There were also plans for a theme park which were met with much backlash, and Malaysians expressed their anger towards these plans in an online petition[9].

“In recent years, there has been a lot of deforestation happening throughout Cameron Highlands, which caused massive land clearing, landslides, rising temperatures, and loss of natural habitat for animals and plant species.”

“Cameron Highlands is a unique place with its natural flora and fauna. It is unlike any other constituency in Malaysia; it is not only home to hundreds of floral species that are rare to the tropics, but it is also an area with a substantially different ecosystem,” said the copy on the petition’s page[9].

We can foresee extensive damage to nature if the proposed theme park in Habu is given the green light, not to mention the volume of visitors and vehicles going up once the park opens.

Regional Environmental Awareness Cameron Highlands (REACH) president Dilip Martin had also expressed worries about these developments, stating that they should be halted while an environmental damage assessment is being carried out[11].

After seizing illegal farmland, the Pahang state government had been making concentrated efforts to convert these farmlands into permanent forest reserves. One of these efforts was the “Go Green With SASET” program in 2020, organised by the Sultan Ahmad Shah Environment Trust (SASET) in collaboration with the Pahang State Forestry Department (JPNP) and the Malaysia-Pahang Youth Council and attended by 300 volunteers[12].

The program was aimed at reforesting the land with full support from government bodies and the local community to provide educational opportunities to explore illegal deforestation and environmental concerns[12].

Although Cameron Highlands may not be the same place as you once remembered, there are still those who are fighting to protect this natural treasure from the threat of over-development.

We need to strike a balance between development in agriculture and preserving nature. What is tourism without the flora and fauna that Cameron Highlands is known for? – K. Kaliyannan, a tour guide[8]

6 Horrible Realities Faced By Unwed Mothers And Their Children In Malaysia
Daylight Scams: Bogus Health Products A Big Hit Among Malaysians
ESG Uptake, Increase In Eco-tourism And Other Environmental And Sustainability Trends In 2023
5 Subtle Ways Climate Change Can Affect Your Finances
9 Malaysian Who Don’t Mince Their Words And Fights For Those Who Can’t
Malaysians Want To Use Playgrounds, Parks and Recreational Areas, But Who Takes Care Of Them?
A Muddy Mess That Can Turn Fatal - The Truth About Landslides in Malaysia
7 Things You Need To Know About The New UN Biodiversity Agreement Signed By 190 Countries
Good News: A Gift Of A Healthy Heart And Five More Hopeful Stories
Does Malaysia Need To Declare A Climate Emergency?