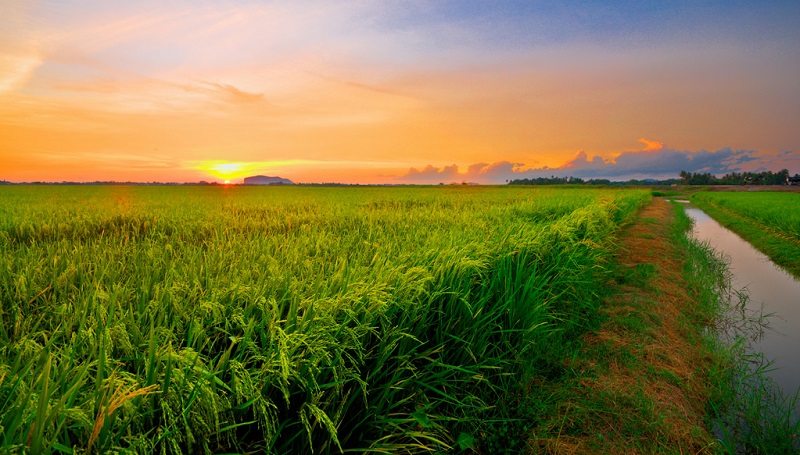 The state of Kedah is known as the “Rice Bowl of Malaysia” since it produces some 43% of Malaysia’s home-grown rice[1]. As such, many of its farmers depend upon the crop to support themselves and their families. And recently, the Kedah state government has made plans to ramp up rice production both in preparation for a potential global food security crisis[2] and to combat rice cartels[3].

These plans, however, are being jeopardised by climate change and the resulting sea level rise. And for the rice farmers whose very lives depend upon this staple crop, it will mean nothing but grim tidings.

For one Yusof Awang Kechik, rice farming is a livelihood that has been passed on for over three generations. Having since retired from the farming business, Yusof had passed the mantle to his son. But the knowledge he had used to ensure his and his family’s success is now being put to the test as weather patterns change and the sea rises[4].

Because of this, crop yields have become lower as more and more rice plants die off, and farmers can no longer rely on the tried and tested weather predictions that have led to successful harvests in previous seasons[4].

And that is on top of seawater flooding their paddies and contaminating them with salt. It is predicted that sea levels will rise by between 30mm to 210mm in 2030 and between 110mm to 620mm by 2050 in some parts of the country, with Kedah being one of the most vulnerable[5].

The Third National Communication and Second Biennial Update Report to the United Nations Framework Convention on Climate Change found that granary areas under the Muda Agricultural Development Authority (MADA) (including Yusof’s rice fields) are particularly vulnerable to sea level rise flooding (especially during the South-west Monsoon period) due to its low-lying coastal plains[5].

The granary areas under the Muda Agricultural Development Authority (MADA) (including Yusof’s rice fields) are particularly vulnerable to sea level rise flooding (especially during the South-west Monsoon period) due to their low-lying coastal plains[5].

The danger presented by sea level rise is especially problematic as MADA is the largest contributor to Malaysia’s paddy production, forming 38.8% of overall rice production in 2016. Even more troubling is that the report predicts that Kedah’s rice yields will fall by 6% in 2030 and 31% by 2050[7].

This spells trouble for Yusof, his family and all the other rice farmers in the state. Indeed, approximately 40% of Malaysia’s farmers depend solely on rice paddy cultivation as a source of food and their primary form of income[8].

A Flood Of Trouble

Many paddy farmers, though not suffering from hardcore poverty, do remain relatively poor compared to their contemporaries in other occupations, a classic representation of Malaysia’s Bottom 40% (B40) category. As they tend to earn little from farming, most paddy farmers have side jobs for additional income.

According to the 2016 MADA Annual Report, the monthly household income for paddy farmers (both from agricultural and non-agricultural activities) in the region was RM2,527[7].

If farmers like Yusof were to lose their paddies to sea level rise, they may not be able to provide financial support to themselves and their families. Even with their additional, non-agricultural side-jobs, their financial situation remains weak and thus will fall deeper into poverty.

Food security exists, when all people, at all times, have physical and economic access to sufficient, safe, and nutritious food that meets their dietary needs and preferences for an active and healthy life. – Barjoyai Bardai, Economist[9]

Kedah provides a majority of Malaysia’s home-grown rice. However,  Malaysia is still a rice-importing country, with much of its rice imported from Thailand and Vietnam. Malaysia’s domestic rice production only meets 70% of national needs[9].

We are 30% short. So, for example, when the Vietnamese government announced that they were freezing exports of rice, we were badly affected because we import a lot of rice from them. – Barjoyai Bardai, Economist[9]

This puts Kedah in a rather precarious position. Should rice imports be frozen, the state will have to increase its rice production to meet food security demands. And should the yields continue to plummet, it will impact the country’s food security in different, detrimental ways.

Some include food shortages, nutritional deficits and rising prices. Such adverse impacts will be problematic for the rice farmers themselves. Despite producing enough rice yields, they may not be able to afford their staple food.

Measures need to be taken to combat this issue. In 2019, former  Prime Minister Tun Dr Mahathir Mohamad announced that the 10-year-old Malaysian Green Technology Corporation under former Energy, Science, Technology, Environment and Climate Change Minister Yeo Bee Yin would be rebranded to the Malaysian Green Technology and Climate Change Centre (MGTCCC)[4]. However, it is still largely in the ‘study’ phase.

We need to understand if we really, really need the law. So we did a pitch study with a team from the United Kingdom and they’ve come back to me. They need more time. – Unnamed ministry official[4]

For Yusof and the other rice farmers, there simply is no time to mull things over.