Teacher Motivates B40 Students Through The Wonders Of Science 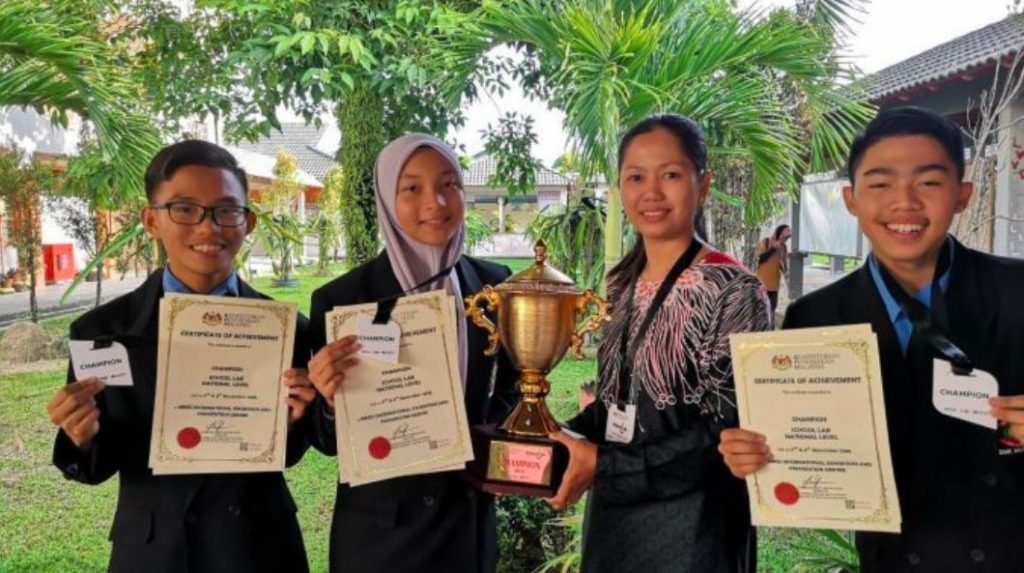 Did you know that the number of students taking an interest in Science subjects in Malaysia has been dropping?

In 2019, former minister Yeo Bee Yin stated that there were only 44% of student uptake for science-related subjects compared to 48% in 2012. This meant that fewer students were interested in pursuing Science, Technology, Engineering and Mathematics, otherwise known as STEM, for their education[1].

Angela Joseph, a science teacher at SMK Mutiara, Labuan had realised the same pattern occurring in her school. She noticed that her students lacked the drive and interest in STEM subjects and these topics would quickly be written off as ‘difficult’ and ‘boring’.

Igniting A Spark For Science Through Competitions

When Cikgu Angela had started working at SMK Mutiara, Labuan in 2016, she was dead set on changing this mentality of ‘science is hard, why bother?’. One approach she took was by fueling her students’ competitive spirits. By establishing the first STEM club in the state, and forming multiple collaborations with the British Council and the state’s science ministries, Cikgu Angela managed to pique students’ interest in these subjects.

It wasn’t long before her school, an underdog in state competitions, won the regional STEM competition against other schools who had a more established science curriculum. These reigning champions went on to represent Labuan in national competitions, something that many previously believed to be impossible. Armed with success and a victor’s reputation, it was a matter of time before more and more students showed interest in science.

When I first started, very few students were interested in joining. But I tried to keep things interesting, I aimed to make these children fall in love with the world of science and they did. Taking that passion and winning these competitions, empowered them even more. They started to realise that they weren’t just kids from an island, that their skills were good enough to compete with the rest of Malaysia.

Of course, competitions would only come once every few months, and a student’s interest is a short term thing. When asked about how she managed to keep her students motivated throughout the year, there was no mention of any new teaching techniques or advanced learning styles. Instead, she focused on taking care of her students’ needs and aiding them in their silent struggles.

As a teacher, it’s very easy to lose your temper when a student isn’t paying attention or does not have their pencils and books ready for class. There are always going to be students that put up a tough front and mess around in your classroom. But it is only when you get to know them..you realise there is a lot more than what meets the eye.

With 80% of her class coming from low-income backgrounds, Cikgu Angela explained that financial restraints have a huge impact on how a student performs in school. There were children attending school on empty stomachs, there were children skipping school because they couldn’t afford to pay for the RM2 bus fares, and there were students who were having troubles at home.

We as teachers are the acting voice for our students. These children are not going to volunteer information about their problems, only when they trust you, do they confide in you in private.

Identifying and understanding a student’s struggles is one thing, advocating for them is another. Cikgu Angela believes a teacher’s help does not always have to be verbal and enjoys doing the little things to make her classroom a more comfortable learning environment.

They need an escape as much as we do. They come to school to get away from their house, so their school time shouldn’t be another place where they have problems. When you take children out and allow them to get creative (even when studying science) you’ll be amazed at their abilities to learn. I love camping with my students.

Curating Curriculum For Her Students During The Pandemic

Even in these times of COVID, Cikgu Angela continues to take care of her students. In order to take care of their education during these lockdowns, she prepared modules and references for the students to use and even took the liberty to send these personally to students in need. These modules are filled with exercises and notes that are not dependent on the online classes that she conducts, simply because not everyone can attend.

I will never stop wanting to teach. As a teacher, we usually do not get much credit when our children succeed. Yes, their grades are amazing to show, but I just love watching my students become better people. I love watching their interest grow. I love being a teacher!

Whilst the school is working together with PIBG to obtain devices for students from low-income households, Cikgu Angela frequently makes personal visits to ensure her students are coping well, especially in their mental health. She understands that online learning is not an easy task and the lockdown has inevitable negative impacts – but as a teacher, Angela is trying her best to make the most of the situation.