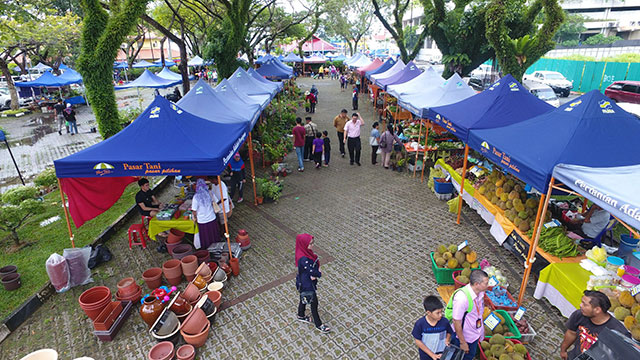 Before the break of dawn at 6am in East Malaysia, there are lights in the kitchen that have not been switched off since the previous night. One is at the house of Shamsiah, 50, she’s been awake since 11.30 pm on a Friday, burning the midnight oil and preparing kuih– muih (local delicacies).

Another individual who has been awake since 2.30am is Rita, 42, a mother to a 3-year-old preparing fried kuey teow, fried noodles and various drinks in a multitude of colours and flavours to be sold at the weekend market.

The Tamu market as it is known in East Malaysia is an open-air weekend market. The word “Tamu” means meeting and it is a place where people from different villages and areas of East Malaysia gather together and sell their goods. In rural parts of Sabah, Tamu markets are often localised and involve the local communities selling their goods to their neighbours and visitors.

But the most famous and oldest Tamu market is found at Jalan Gaya in Kota Kinabalu. This weekend market traces its roots back to the 1940s where local traders and merchants from Sabah’s interiors came out to sell their goods, fresh produce and other paraphernalia[1].

“I come here once a week. About 20 years ago we came here to do business without a permit, but now we have been given permission by the Kota Kinabalu City Hall (DBKK) to sell sigup (tobacco), kirai (nipah cigarettes) and lugus (young pinang). –  Obihian Magawai, 58, from Matunggong, Kudat[1]

In Labuan, the Tamu is located at Jalan Merdeka within the vicinity of the Labuan Museum. Rain or shine, the vendors come as early as 5.45am to set up the blue umbrella at their designated lot, parading food, beverages or clothing items. Nearby, a Pasar Tani is in business to highlight local farmers’ produce.

From Mother To Daughter

It is a common scene for mothers to bring their children to the weekend market for company and teach them the ropes. On another stall, a teenage girl was selling alongside her mother, counting the change and returning it to customers. Shamsiah also  had her son working alongside at her stall.

Similarly, for Rita and Shamsiah, selling at the Tamu has been embedded since their childhood. Both grew up helping their mothers at the Pasar Tamu.

I have been helping my mother since the Federal Agricultural Marketing Authority (FAMA) was first established in Labuan.– Shamsiah, 50, a vendor at Tamu market

Has it been that long? I remembered helping my mother since primary school.– Rita, 42, a vendor at Tamu market

Ultimately, both women have been at the Tamu market the longest and have built an easy camaraderie selling side by side.

Why Sell At Tamu Market?

Rita has had her fair share of setting up different businesses such as opening a shop at the local shopping centre, Financial Park. However, that was short-lived due to high rental costs and strict regulations. In addition to selling at Tamu market, she tends to a clothing store at the Urban Transformation Centre (UTC) Labuan on weekdays.

The rent is affordable at UTC, it is owned by the Perbadanan Labuan. That adds up to my income too. – Rita, 42, a vendor at Tamu market

But her heart lies closer to selling at the open-air market. Before selling food, Rita was selling clothes. Yet, over the years, she has picked and chosen the venues she would sell in. The Tamu market lots are cheap at RM 40 per lot. But for other weekend bazaars, the rental has been steep. Often she might have to work longer hours with a smaller return.

The lots at the Tamu market are often limited and subject to the approval of the local council. In Labuan, it’s the Perbadanan Labuan streamlining the vendors who can sell. But in bazaars organised by others, it is open to all.

Rita has also observed there are more hawkers post-pandemic in other bazaars.

It is projected that there are 200% of hawkers nationwide following the 2020 pandemic due to its low barriers to entry. Each microentrepreneur is peddling goods that are similar to one another[2].

People were retrenched, so they started selling at bazaars or open stalls for income.  – Rita, 42, a vendor at Tamu market

The influx, however, exceeds the consumer demand. The island of Labuan’s current population is 99.1 thousand in 2019[3], and most residents have migrated from the mainland of Sabah. During the festive season or long holidays, there are fewer visitors to the Tamu market.

If the proposed bridge connecting Sabah and Labuan is built, we would barely have people staying in Labuan on holidays. – Shamsiah, 50, a vendor at Tamu market

These days Rita sought to only play in the ground she is familiar with. Rita is managing her time to ensure she would be at home during the weekends with her family.

I have long-time customers who remember me and that’s enough. I used to join associations and programmes for entrepreneurs but they take up most of my time. – Rita, 42, a vendor at Tamu market

Over the years, Rita and Shamsiah have built their presence in the Tamu market and are known by the locals in Labuan.

Our business relies on the people who already know us. So we are grateful for that. – Rita, 42, a vendor at Tamu market

Noticeably, Rita was alone in tending her stall from 7 am to mid-day. But, she was quick on her feet whenever she saw customers approaching. There were times when Rita worked with her friends at the stall. But it left a bitter experience for her.

There are challenges in any sort of job. But I enjoy what I do so it overcomes any challenges I have. – Rita, 42, a vendor at Tamu market

Most importantly, the Tamu market is Rita’s lifeline. During the pandemic, she earned only RM 200-RM300 from her weekly sales. Once open-air markets were allowed, Rita was relieved as her source of income had returned.

Shamsiah, on the other hand, experimented and started selling frozen kuih during the pandemic.

Close to mid-day, the Tamu market vendors are slowly packing up, bringing down their blue umbrellas. Rita gave away some of her leftovers to the nearby museum staff, and Shamsiah was loading her empty trays in her car.

Tomorrow is another early start for both of them. Rest is much needed.

Tamu markets or even the 312 Pasar Tani nationwide[4] may disinterest many of the younger generations with the stereotype of it being dirty, questionable food hygiene and the hustling and bustling crowd.

But in Labuan and many parts of East Malaysia, where Tamu markets can be found, it is the blood flowing through the veins of the community. Many may be drawn to supermarkets for groceries or restaurants for meals. But it is at the markets where we truly understand the people behind the cities.

Shamsiah and Rita have spent most of their lives selling at the weekend market. Both could narrate the stories behind Labuan and how it has changed over the years.

To Shamsiah, who runs a frozen kuih business on the side, there’s a magnetic pull to return to the weekend market, it may not only be the sales, but also meeting with familiar faces in the community on weekends.

Rita was at a loss when asked if the Tamu market no longer runs and it was an indication that the Tamu market holds great significance to her. In the past, Rita had attempted different businesses and shops, but the weekend market had been the most profitable and sustainable to her.

If there’s no weekend market?  I can’t even think about it. – Rita, 42, a vendor at Tamu market

Whether it would be passed onto the next generation, only time would tell. For Rita, her child is only three years old but it won’t be a surprise if she would have a small helper with her friendly smile in the future.

The Tamu in Labuan may be quieter than many other markets in Malaysia but it is a vital part of their social fabric. Some foods can only be found in Tamu markets which adds to its uniqueness such as pais ubi or kuih peneram.

As long as Tamu markets are being run, it would provide opportunities for small business holders such as Rita and Shamsiah to improve their family’s livelihood. But Tamu is also a thread that binds the past, present and the future generation in East Malaysia.