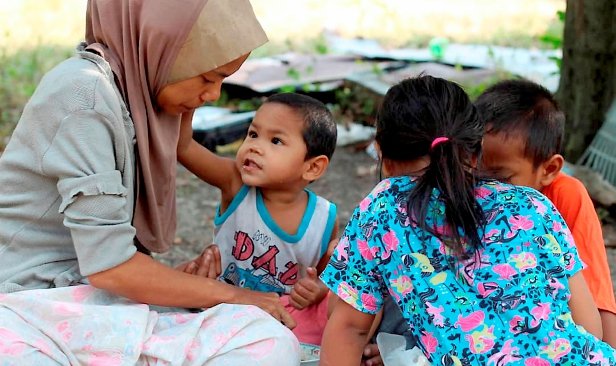 Single mother Asmawiah Ismail had her heart torn when her two children had to go to school in ‘Phua Chu Kang’ boots (yellow rubber boots). This came about after the recent flood that devastated Selangor and Pahang, which includes Hulu Langat where Asmawiah and her family resided[1].

At the peak of the flood, her house in Batu 18, Sungai Lui was submerged in water all the way up to the roof. Asmawiah house was completely wiped out and she was left with a muddy shell when the floodwaters receded. Her two schooling children, aged 8 and 16, had their school uniforms, shoes, bags, and books destroyed. Her eldest child is currently a final year student in UKM.

We are only left with the boots, and they can’t do anything if the teachers scold them. Even their uniforms are gone and they have to wear normal attire to school. – Asmawiah Ismail[1]

As the flood swept through the village on 18th Dec night, Asmawiah’s children and their cousin had to climb on a tree to avoid being drawn by the forceful current. They were forced to stay atop until the next morning as Asmawiah took her wheelchair-bound mother to seek shelter at a nearby surau.

Asmawiah lost her husband more than a year ago. The relief aid promised by the Ministry of Education (MOE) was of no use, as the distribution centre was situated in the neighbouring town of Nanding. With her motorbike and car destroyed, Asmawiah was hampered from receiving the aid that was offered.

There is another road that leads to the centre, but it is hilly and would take a longer travelling time. How am I supposed to go and get the aid without my bike and car – Asmawiah devastated by her loss[1]

It was a total loss for this single mother and the cash aid of RM1,000 per household from the Selangor and federal government just was not enough.

I can buy food with that money, but not electrical appliances. It is going to take a long time for my family to restart our lives after the flood. – Asmawiah, a religious school teacher[1]

After Asmawiah’s story broke out, MOE reached out to her. The officers came and bought new school supplies for her children. Teachers also visited her family, some even offered to give her children a lift to school. Most heartwarming of all is the donation she received from anonymous donors[2].

There are donations from a lot of people into my bank account. I was shocked when I found out. Thank God and thank you all very, very much. – Asmawiah[2]

The Plight of Single Mothers

According to the 2010 Population and Housing Census, there are 13.9 million women in Malaysia, 235,240 of them being single mothers[3]. Single mothers are in their predicament as a result of spousal death, spousal abandonment, or divorce.

Many single-parent families plunge into financial difficulties as the household income is only dependent on one parent. In the case of housewives, many of them are at a loss from the void of a husband and also the income that comes from his job. A great majority of single mothers that come from rural areas lack specialised job skills and education that qualifies them for proper employment[5].

It is no surprise to discover that the unemployment rate among female heads of household is higher as compared to males at 10%, more than double the national average (4.7%)[6]. In order to continue providing for their family, single mothers who re-enter the workforce are confronted with unfavourable job options — labour-oriented and poorly-paid which, unfortunately, includes the sex trade[7].

7 out of 10 single mothers reported no savings, while those who do have an average of RM342, barely enough to last for 4 weeks[6].

Living paycheck-by-paycheck is not an exaggeration when 49% of single mothers depend on daily wages for their income[6]. That means their family is sitting precariously on the cliff of financial ruin. A major disaster like the flood that Asmawiah faced could have been the last push into the abyss.

Maintaining a job proves to be much harder than getting one, especially when they have children to care for. A survey by thinktank Institut Wanita Berdaya Selangor (IWB) polled 442 women in Selangor during the first wave of MCO and found that 71% of them had dependents including children, elderlies, and disabled family members[8]. Of the 55 single mothers, 45% of them were found to have no one to help care for their dependents when they are at work[8]. This includes Asmawiah with her elderly mother and 3 children.

The outlook of single-mother households was dimmer still during MCO as 42% suffered income loss due to unpaid leave, termination of the work contract, and business closure[8]. The most concerning of all woes are the ones brought upon the children.

Single mothers consistently reported great difficulties in paying for children’s tuition expenses, with 59% facing difficulty in paying school fees and 65% having difficulty providing sufficient pocket money[6]. Observing distancing SOP becomes a challenge when close to half or 46% could not even provide face masks for their child[6].

Given that return to school is coupled with slow economic recovery, many children from low-income households may be at risk of dropping out of full-time education in favour of gaining extra income for the house. The anxiety and pressure of working will further strain the psychology of a growing child.

The Ministry of Women, Family, and Community Development launched the National Action Plan for Single Mothers (2015-2020)[9]. The plan details three key strategies to empower and safeguard the social well-being of single mothers. The strategy Empowering Economy of Single Mothers includes tactics such as the capacity building of employable skills, career guidance, job matching, and professional attachment to companies.

There is yet to be a report on the outcome of implementation upon the conclusion of the action plan in 2020. However, in light of recent data, there seems to be a need to continue or even upscale the reach of the action plan to include more single mothers.

Fortunately, the calling was heeded by Budget 2022 which saw RM8.2 billion allocated for Bantuan Keluarga Malaysia with cash handouts up to RM1,500 given to low-income single-parent households with children[10]. The JaminKerja initiative seeks to create 600,000 jobs with wage subsidies to companies to hire single mothers and unemployed women, housewives and women on flexible working arrangements.

Though it is absolutely encouraging to see a socially responsive budget, one still has to bear in mind that the availability of welfare does not necessarily equate to the accessibility of such welfare. Among female heads of households without any form of savings, 1 out of 2 is not covered by EPF and SOCSO[6]. Asmawiah seems to echo the same sentiment about the inaccessibility of KPM’s aid.

The plight of single mothers in Malaysia shares its roots with the issue of poverty and gender inequality. It requires more proactive ideas with consistent implementation to be successfully addressed and overcome. Here are some changemakers empowering single mothers on the ground:

It is with the hope that, when life throws the next curveball, Amawiah and her children will be more equipped to hit it back, maybe even a home run.