Sex Workers’ Stories: Many Of Them Don’t Choose Their Profession 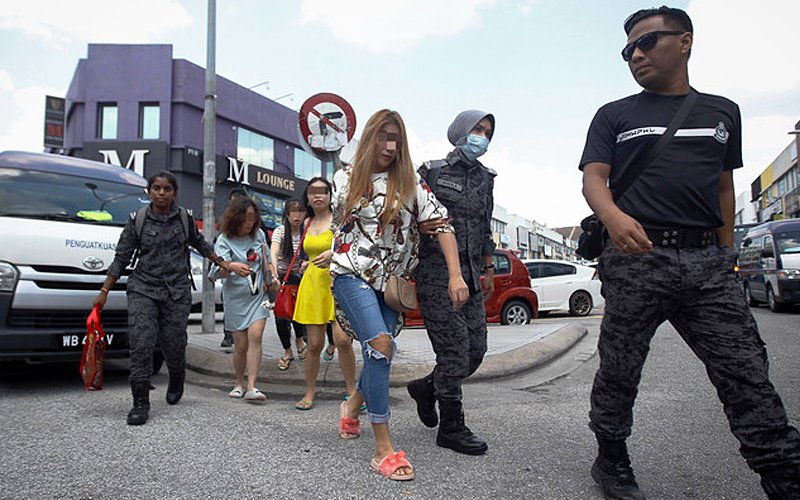 The mention of sex work immediately brings about a negative perception. What good can come out of sex workers? Their jobs don’t fit the ordinary profile of any profession. Their work hours are odd and unimaginable and the risk related to the work can potentially be fatal.

While it is easy to point fingers, people seldom question the reasons why someone would decide to be a sex worker. The reasons are numerous and varied, but the common thread is poverty as the driver of sex work in Malaysia[1].

When 35-year-old Ros married for love, she never imagined she would be a victim of abandonment and go on to become a sex worker. Abandoned by her husband, her in-laws offered help in exchange for sex.

It’s been five years, and sex work provides Ros, a single mother, with a steady income to raise her child. To escape poverty, many women like Ros resort to sex work when conventional methods fail them[2].

The pandemic and lockdowns have plunged them further into poverty with a plethora of rules to abide by. Sex workers had to rely on funds from the government’s economic stimulus packages to survive. Those most affected by the pandemic are ageing sex workers who received less clientele and have to keep up with their physical appearance just to keep up with younger workers. With no further savings and unable to afford insurance, older sex workers must push on despite health obstacles[2].

Others Speaking Up For Sex Workers

Why are NGOs and activists advocating for the rights of sex workers? Because many don’t know their basic rights and are placed in degrading environments where constant humiliation and discrimination take place.

When sex workers are caught by the police, they are at the mercy of those with the keys to the handcuffs. Unaware of their legal rights, sex workers do not question the reason for the arrest and do not seek the legal help needed. Most, if not all remain silent while in question[3].

Queer Lapis, a website created by and for the LGBTQI+ community has many resources aimed at raising awareness among the queer community. In the section on legal matters, it states that there are laws against prostitution, however – not all sex work is illegal[5].

While there are numerous laws on prostitution, they often conflate exploitation or forced sex work with sex work done freely and consensually. Acts like child prostitution must be criminalised in all instances as children can never consent to sex work. However, the same cannot be argued for sexual relations involving consenting adults. – Queer Lapis[6]

Why Are Sex Workers Still Working If the Stakes Are So High?

When she was 20-years-old, financial distress caused Siomey’s former partner to sell her to a brothel. She’s been a sex worker ever since, enduring the physical and verbal abuse for her son and parents whom she looks after.

Sometimes they ask us to offer extra services and if we don’t do it, they hit us. – Siomey.

Coming from a poor family, Siomey** knew what it meant to do whatever it takes to survive. She also realised that other careers could not match the income she was receiving as a sex worker as she lacked the education and experience needed for a white-collared job.

Most of the retail jobs only pay me around RM1,500 – half the amount I’m making now. – Siomey.

As a single mum, Siomey also bore the responsibility of providing for her 5-year-old son. Knowing that it’s not the most ethical profession, she hopes to eventually quit sex work – but at the moment, Siomey does not have a choice[4].

Stuck in poverty and nowhere to turn to, women like Siomey are objectified and dismissed by their families for tarnishing society’s perception of them, going against religious laws and more. These reasons cannot justify abandoning someone to a gruesome state of poverty, where they sell their bodies to nourish it.

Once in the sex trade by force or without consent, sex workers who pluck up the courage to regain a new lease of life have amazing stories to tell.

35-year-old Ainn** was raped and sexually harassed by her father and step-brothers. She watched the life of her stepmother who was a sex worker and before long, Ainn was forced into the same trade as well. She longed for freedom and ran away when she got the chance, only to be scammed into doing more sex work. After being a victim of false pretence in exchange for freedom, Ainn found out that she was HIV positive. Since the diagnosis, Ainn has been living in a shelter home by Pertubuhan Kesihatan dan Kebajikan Umum Malaysia (PKKUM). Despite what she’s been through, Ainn’s look on life revolves around acceptance and forgiveness [4].

Be strong and never let anyone harm you. – Ainn

Rina** has been on the job for 21 years. At 15, she was HIV positive. Despite informing her clients of her condition, they ignored her request to use contraceptives[5]. As a result of ignorance and non-compliance, many others are at risk of contracting HIV, a disease with no permanent cure and requiring lifelong medication[7].

Sex workers can only do so much, as clients are responsible for their well-being. In most cases, they refuse safe sex knowing the dangers of sexually transmitted diseases. Another lady, Lily** has been living with the dreadful disease since she was 15-years-old, and is overworked. With pre-existing health conditions, Lily was raped by her father and went on to marry a drug addict who infected her with HIV. She sees no other way of making a living, as her own family has rejected her and said that she is mentally unstable.

How else am I going to make a living doing anything else? Nobody will hire a sick woman. – Lily

Being in a work line where women’s bodies are objectified and degraded, Lily’s self-inflicted wounds on her arms were to make her feel pain as being a sex worker has numbed her[5].

HIV On An Upward Trend

The United Nations AIDS Data reported 92,000 cases of HIV positive cases in Malaysia in 2020. The trend has been upward year-on-year and is the same for AIDS-related deaths[8].

In 2020, over 3000 cases of new HIV infections were reported in the country. 94% of those cases saw sexual transmission as the main mode of transmission. During the pandemic, almost RM100 million was spent on the treatment and prevention of AIDS[9].

The stigma and discrimination that comes along with the disease are there and those who are living or affected by it must survive not only the virus but the society’s negative perception against them. So we need to play a part. We need to move away from discriminatory and judgemental remarks. – ​​Khairy Jamaluddin, Malaysian Health Minister[9].

Where Do We Go From Here?

We are accelerating our ending AIDS mission as we rebound from Covid-19, which has only reminded us of the grim reality of the early years of the AIDS pandemic when treatment was wishful thinking. Prof Datuk Dr Adeeba Kamarulzaman, MAF Chairman[10]

There are some helpful ways we can play our part. Start by learning and listening. Understand what sex workers go through, and if you don’t, just ask. Don’t assume you know what they need, engage and ask how you can be helpful. Initiate or be involved in fundraisers supporting sex workers to help pay legal bills, Covid-19 has taken a toll on them too [6].

In the words of Hellen Keller, “Alone we can do so little, together we can do so much”. As a community, we should encourage those with HIV to reach out and seek help. Here are some helpful resources :

PT Foundation’s Sex Workers Programme provides a safe space for sex workers to address the concerns they are faced with here in Malaysia.  The programs are designed to educate sex workers on basic human rights, rights as a sex workers, and to equip community members with the knowledge to protect themselves against HIV and other STIs, to reduce the transmission of these infections.

Women’s Centre for Change (WCC) helps women and children who are abused, raped or sexually assaulted. Get face-to-face, telephone and email counselling, temporary shelter and legal advice. All cases are confidential and free of charge.

** All names mentioned have been changed to protect the privacy of the interviewed individuals.