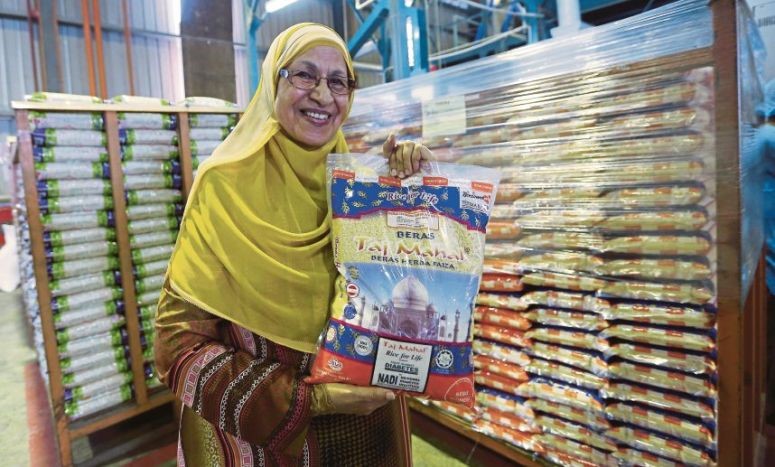 Walk into any supermarket in Malaysia and you’d be sure to stumble on the Taj Mahal Ponni brand of rice on the shelves. The company is also behind the long-running TV programme on TV3, Bersamamu now in its 17th year. Bersamamu is dedicated to shedding light on the plight of low-income families to raise awareness and promote charity[1].

Syarikat Faiza Sdn. Bhd. is a huge rice empire with a string of products and list of commendable charity endeavours – but little is known about its founder, Faiza Bawumi Sayed Ahmad. Her story of giving and rising as a female entrepreneur in the 1970s is awe-inspiring.

Not An Ordinary Homemaker

Faiza Bawumi is Egyptian by blood, and after marrying Abu Bakar, a Malaysian Syariah student at the time,  she migrated to Malaysia with her husband and her firstborn in 1964. Living in Malaysia for at least half a century, she considers herself very much part of the Malay Malaysian community.

Although originally from Egypt, I consider myself a Malay after getting married and living in Malaysia for decades. I feel challenged by the cynical views given to Malays for being labelled unskilled, let alone to women and housewives, so much so that it managed to spark the spirit for me to be more successful. – Faiza Bawumi Sayed Ahmad[2]

Even from a young age, Faiza was helping her family’s business in Egypt. The young Faiza assisted as a cashier while her father attended congregated prayers. The experience she gained was the starting point of her entrepreneurial journey.

Arriving in Malaysia, her small family resided with her welcoming in-laws in Batu Pahat, Johor. She socialised with her neighbours to obtain a better grasp of Bahasa Malaysia. Within three months, Faiza became fluent in the language.

My late husband allowed me to run businesses on the condition that I need to take care of my husband, children, self -respect and family. He is confident that I can do business. But, I have to manage my time wisely to ensure that the household chores are completed as well. – Faiza Bawumi Sayed Ahmad[3]

But, she is not content with being idle. With the permission of her late husband, Faiza, a diploma holder in embroidery and sewing started taking commissions with a starting capital of RM4.

Slowly, with increased income, she bought yards of cloth and sewn dresses for children along with sets of pillowcases. Her neat sewing became the main attraction for her customers to purchase her products. It was also credited to the good social support that she has by her side.

When I started my business, from the beginning, my late father-in-law prayed for me, God willing, Wherever you go, you will be happy and people will love you. My mother-in-law said her prayers in Javanese for the advancement of my business. – Faiza Bawumi Sayed Ahmad[4]

She was constantly evolving with her business ideas. With the profit of her business, she would start a new side business such as selling kitchenware. Then, she started selling spices and producing curry powder. Faiza was initially inspired by watching a cook using millstone to create powdered spices and curry powder.

I started working on small-scale home-produced spices after being fascinated by the persistence of a cook at a wedding preparing cooking spices using a millstone. Then, I started producing quality spices for commercial purposes to be used at large events. – Faiza Bawumi Sayed Ahmad[2]

She bought various spices; cumin, coriander seeds, cloves and dried chillies. She cleaned, ground them and fried the spices in her home kitchen and sold them under the brand, Bunga Raya when her family moved to Mersing. Being more confident of her spice venture, she bought a shop at Taman Makmur as an operational centre while also selling groceries.

When doing business, you need to start from the bottom. If you’re already at the top when starting out, you wouldn’t understand the hardships and the worries of the working class. You’ll also be more gullible and easily deceived. – Faiza Bawumi Sayed Ahmad[3]

The Start Of A Rice Empire

As her spice venture prospered, she aimed for bigger goals. Faiza applied to become a Basmati rice distributor from the National Paddy and Rice Board (LPN) known as Padiberas Nasional Bhd (BERNAS) in the early 1980s. Her determination earned her the rice wholesaler licence from LPN in 1989.

She is Malaysia’s first Muslim woman entrepreneur distributing various types of rice under the Bunga Raya brand back then. Within 9 years, she successfully expanded her business to Johor, Malacca and Kuala Lumpur.

Despite the intense competition in the early 90s, her down-to-earth nature and consideration for consumers’ needs was the factor behind her thriving business. Always on the lookout to improve their product offerings, Faiza Sdn. Bhd. introduced a category of good-quality “Ponni” rice from Karnataka, India.

The “Ponni” rice marketed under the Taj Mahal brand boasts health benefits to diabetic sufferers after a million ringgit research by the enterprise and an expert from Universiti Putra Malaysia.

Faiza Bawumi has been in the rice business for decades and had her fair share of challenges while building her empire. Her business almost failed when an ex-worker attempted to steal her customers in the early years.

There are all sorts of ways people want to cheat in business.  Once, I caught a worker selling sacks of rice that were put in trucks. These sacks of rice are expensive in the market. – Faiza Bawumi Sayed Ahmad[5]

With over 200 staff today, Faiza’s motto when it comes to business and staff management is to be firm and also, to be honest, and trustworthy.

Millionaire With A Mind For The Poor

It wasn’t personal wealth that she aimed for when she stepped into business, rather she wanted to be the highest zakat contributor in Malaysia. With the mindset of goodwill, the prosperity of her enterprise is often distributed to the underserved community.

As we live in this world, what we have is not our right. It belongs to God, we are just managers of God’s wealth. Give with sincerity and honesty. – Faiza Bawumi Sayed Ahmad[1]

One of the examples of her goodwill effort is the Bersamamu programme. Faiza also presides over the Persatuan Ibu Tunggal Johor (Single Mothers Association In Johor) and is actively involved in the Pertubuhan Kebajikan Wanita Islam Malaysia (PERKIM). In 2016, Faiza personally established four safe spaces for girls both orphaned and from an underprivileged background to support their education.

Even during her golden age, Faiza is heavily involved in the running of Syarikat Faiza Sdn. Bhd. Over the years, she received various accolades, such as Tokoh Srikandi Negara in 2014 and National Maulidur Rasul Icon in 2014.

Her success while being a mother to 7 children is commendable. She is always advocating for homemakers and women that there is nothing impossible when it comes to success. Faiza Bawumi after all is living proof of it.

You must be sincere, trustworthy and diligent. Do not think that being a homemaker or a housewife is the end of a woman’s life. I have proven otherwise.  – Faiza Bawumi Sayed Ahmad  [3]