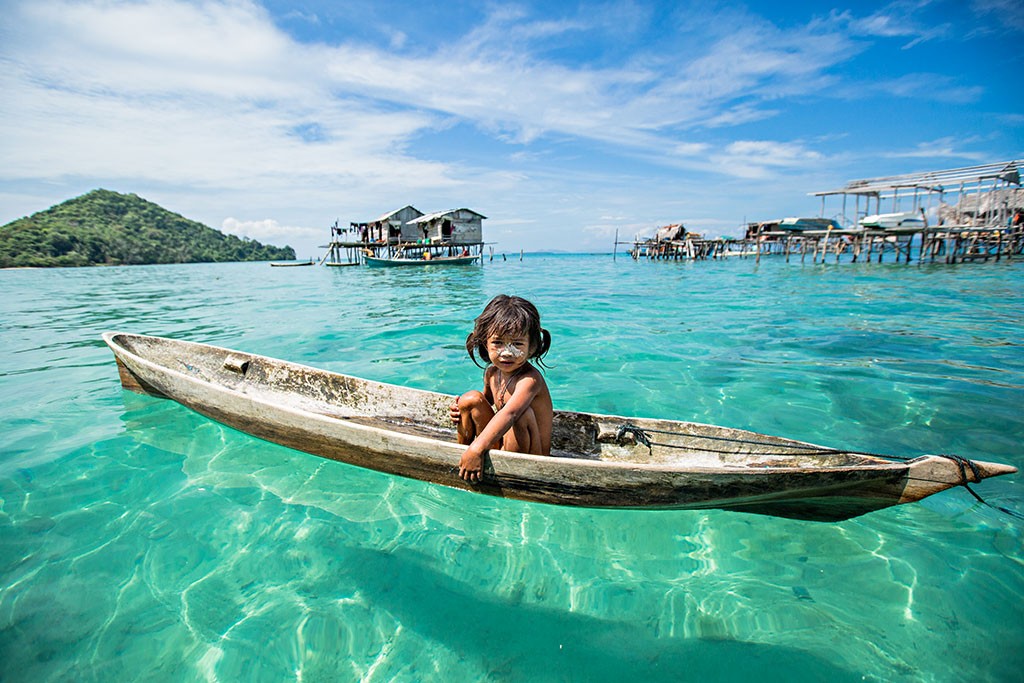 The Sea Gypsies or Bajau Laut are people who long lived on the fringe, surviving in a hostile world while still being one with their environments. But now their culture and livelihoods are threatened by the oncoming tide of climate change, putting their adaptations to the test.

Who are the Sea Gypsies?

Originating from the Sulu Archipelago in the Philippines[1], the Bajau Laut or Sama-Bajau are, according to their legends, the descendants of a King’s subjects, sent to find his daughter after she was washed away in a flood, never to return to land until they have succeeded[2].

Even today, the Bajau Laut have retained a largely sea-based lifestyle, having drifted into the waters surrounding Malaysia and Indonesia’s Coral Triangle following violence and turmoil in their native lands[3].

While some groups remained as seafaring nomads, sailing across the ocean on houseboats, others have adopted a sedentary lifestyle, inhabiting the coastal regions of East Malaysia where they form the second largest ethnic group in Sabah[2]. These settlements sit on stilts directly on top of the sea or along well-protected stretches of shoreline, with houses crowded together in great numbers and connected by narrow wooden bridges[1]. Usually, immediate or extended families will stay together, resulting in more than seven people residing in one house[4].

Though few people know about the Bajau Lauts’ traditions and lifestyles, these seafarers have been long-standing political and cultural actors. With their superior navigational skills and knowledge of seafaring, the Bajau Laut have historically been recruited as sea-lane protectors, merchants and wayfinders for the Malay Sultanates[5].

But as our societies modernised, the Bajau Laut have become increasingly marginalised. As a largely nomadic group, the Bajau Laut lack citizenship from the countries they settle in[3]. Furthermore, many of their communities are trapped in poverty[5], lacking access to proper healthcare and education[3]. And yet they still continue to adapt and survive in this ever hostile world.

People of the Sea

Living in an environment as volatile as the sea, the Bajau Laut have become a highly adaptable people, relying on their skills as seafarers and fishermen to eke out a living.

The Bajau Laut are some of the most proficient free-divers in the world, being able to hold their breath for several minutes at a time and swim to depths of 30m. Many have even gotten their eardrums pierced as children in order to facilitate this[3].

An international team of researchers have even discovered that the Bajau Laut have larger spleens than those of land-based peoples. This is important as the spleen serves as a reservoir for red blood cells. During a dive, the spleen contracts and pushes these extra red cells into the circulating blood, increasing its capacity to carry oxygen. Such a response has been observed in diving mammals such as seals[6].

Such adaptations are important to the Bajau Laut for they depend on fishing for their food, trading their catches with mainland vendors for rice and vegetables to supplement their largely seafood-based diet.

The Bajau are very adaptable to changes in the environment. Each fisherman typically needs to catch 1kg of fish every day to feed the family, as opposed to commercial fishermen who fish 10 times that amount. – Laili Basir, social activist[7]

Skilled craftspeople, the Bajau Laut handcraft their own spear-guns, goggles and even boats[3]. And they will incorporate new materials amongst the old in order to strengthen their communities and resilience. In fact, it is not uncommon for communities to destroy old boats, bridges and houses and rebuild them in order to better adapt to environmental changes. They will even take discarded garbage and remake them into tools, decorations and even toys[8].

Even amongst the more sedentary communities, boats still make up a vital part of Bajau Laut livelihoods. From the day they are born to their deaths, many Bajau Laut spend much of their lives in narrow, high-prowed vessels called lepa-lepa, only coming ashore to trade pearls and seafood for wood, rice and water[2]. These vessels are typically no bigger than 10x2m, and yet the Bajau Laut conducts everything from cooking, washing, sleeping and even religious ceremonies within such narrow perimeters[3].

Though this culture has stood the test of time for over 1000 years, the biggest threat to these traditions and livelihoods may have come in the form of climate change.

No fish today. The winds were blowing strong and I came back. Not worth risking being capsized in the dark. – Mr Lan, Bajau Laut villager[7]

As our climate and oceans warm, weather patterns become ever more erratic and unpredictable. And like most marginalised groups, the Bajau Laut are the first to feel the brunt.

Bajau Laut fishermen need calm waters in order to perform their crafts. But increasingly erratic weather patterns have led to stronger winds and more severe storms. And unlike large industrial fishing ships, the traditional fishing boats of the Bajau Laut are unsuited to facing such strong weather without the risk of capsizing[7].

Indigenous and fishing communities depend on safe seas to earn a living and these increasingly strong winds, changes in weather will affect their catch when they are at sea. So it then affects their food security and livelihoods. – Dr Serina Rahman, ISEAS-Yusof Ishak Institute[7]

Warming oceans also have grave effects on the coral ecosystems that provide the Bajau Laut with their food.

They also protect Bajau Laut settlements by buffering against the surf and tidal waves caused by severe storms and tsunamis[2].

These ecosystems struggle in warming waters, however, as temperatures above the optimum will cause coral bleaching events. When this happens, huge swathes of reefs are left dead and barren, and the fish and other marine life that depend on these reefs for shelter will be forced to move or die.

Malaysia has already experienced multiple coral bleaching events and annual surveys have demonstrated that the overall health of Malaysian coral reefs is declining.

Should these bleachings continue, the Bajau Laut will be completely deprived of not just their primary food source but also their very livelihoods and their shields against the pounding surf of hurricanes.

Fishing and being a Bajau is my life. I will never change. Moving to the city and finding another kind of work is not an option for me and my children. – Mr Lan, Bajau Laut villager[7]

Finally, there is the threat of sea-level rise, caused by a combination of increasing ice melt and expanding seawater molecules.

According to a 2017 study by Malaysia’s National Hydraulic Research Institute (Nahrim), the country has experienced an annual sea-level rise of 2.2-5.3mm/year between 1993-2015 due to climate change[10].

This presents a very real dilemma for the Bajau Laut, given that many of their settlements are built along the Sabah coastline[7].

In addition to losing their homes to increased coastal flooding, the Bajau Laut communities will also be adversely affected by accelerating coastal erosion, increased disease risks and seawater intrusion into freshwater sources[10].

Some of them have realised that their homes are getting closer and closer to the water. There are also some whose homes are already completely submerged. – Laili Basir, social activist[7]

The towns expected to be the worst hit by this problem are Tawau, Kudat, Lahad Datu, Sandakan and Kota Kinabalu, all of which have Bajau Laut communities living nearby. The village of Kampung Tanjung Aru Lama is already experiencing some of the effects of sea-level rise, with some residents have noticed that the tide had been getting higher and higher over the past few years. The higher tide had not only resulted in increased flooding but also washed trash from surrounding areas into the villagers’ homes[7].

Although adaptation had been a major part of the Bajau Lauts’ survival, most communities have struggled to properly assimilate themselves into a modern society, lacking knowledge of basic concepts such as money. Thus, they stubbornly continue to face this oncoming tide, even when they are clearly losing this battle.

It’s not ideal but we just get on with life. We are not going to move because everything we need is here. – Janau, Baja Laut fisherman from Kampung Tanjung Aru Lama[7]

It is clear that education is the best weapon against this foe, but the problem is that many Bajau Laut communities lack access to proper education.

On Pulau Gaya, for example, most Bajau Laut students travel to school by boat, which leaves them at the mercy of the weather as strong winds or severe rainstorms can create rough seas that are too dangerous to travel through, a problem that will only worsen with climate change. Furthermore, the hotter temperatures will adversely affect a student’s ability to learn, with Pulau Gaya educators reporting that students were noticeably less attentive during hot weather due to increased levels of discomfort[11].

Meanwhile, Pulau Berhala is suffering from a lack of teachers, as its only school hosts over 236 students, aged 4 to 17, but only has two teachers under its employment. This severe understaffing effectively means that the school is unable to truly attend to the educational needs of every student on the island[12].

Their future is not bright, and I am also resigned to the fact that this is the situation. We help them on humanitarian grounds, and I’m proud to see them growing up to be responsible adults. – Sergeant Muhd Amran Jaafar, teacher at Sekolah 3M on Pulau Berhala[12]

Although the future for this group seems uncertain, it is clear that the Bajau Laut will need to be educated on the causes and impacts of climate change, as well as basic skills such as reading, writing and counting money, in order to give them the resilience required to face this great threat[7].

Local attitudes toward the environment will play a central role in adjustments to climate change. The capacity of societies to change both belief and behaviour regarding the use of the environment will be key in mitigating these risks. – Associate Professor Haliza Abdul Rahman, Universiti Putra Malaysia’s Department of Environmental and Occupational Health[7]