Sarawakian Youth Hikes To Get Good Internet Connection. Unpacking The Digital Divide And Its Effects In Malaysia. 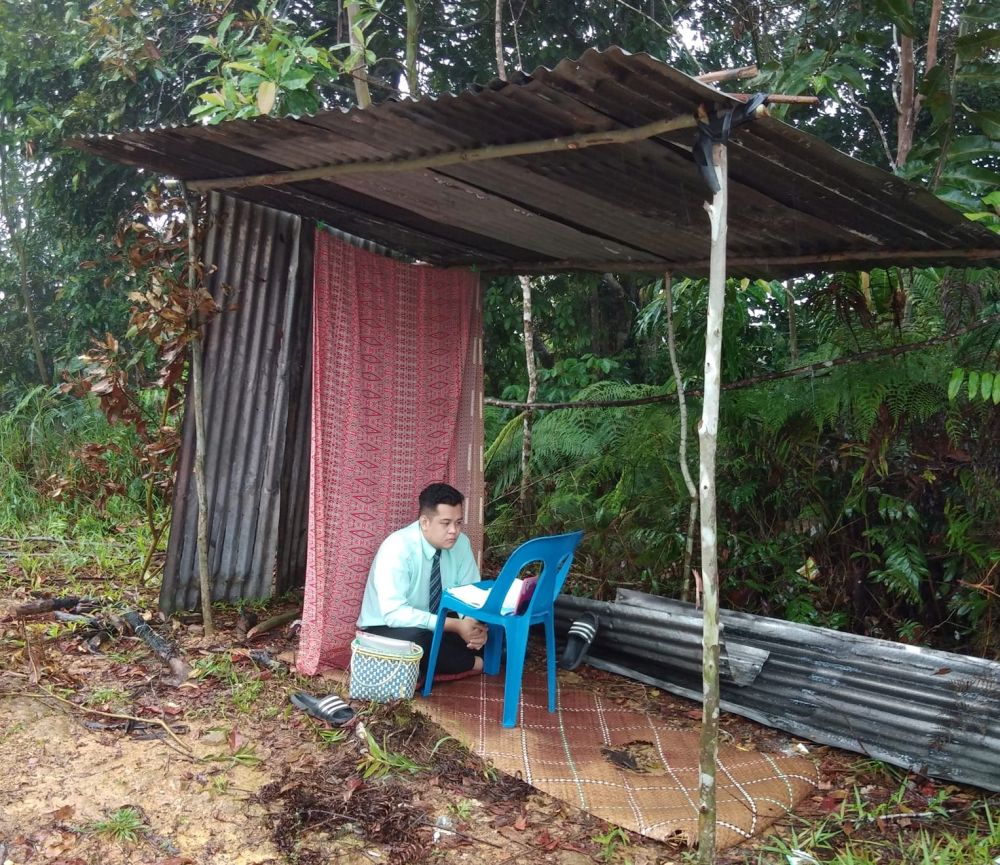 Frank Steward Panting Sa dreams of becoming a teacher in the future. When he received the invitation to attend an online admission interview for Universiti Pendidikan Sultan Idris (UPSI), he was one step closer to manifesting his dream[1]. However, there is a problem that he would have to face to ensure the interview goes smoothly – a stable Internet connection.

Living in a longhouse in Rumah Suing in Teberu, Ulu Kemalih, Pakan, Sarawak, the internet connection provided by WiFi Sarawak’s Linking Urban, Rural and Nation (Saluran) network is often jagged and slow. The reception is limited to basic tasks such as sending and receiving messages through Whatsapp and Facebook[1].

Long video calls at home through Zoom or Google Meet is out of the question due to the restricted bandwidth. In need of a decent internet connection with no hiccups requires Frank to travel and hike up the hill of Bukit Kelingkang for two hours[1].

It wasn’t the first time Frank had to make the journey; he had trekked up the hill previously for different interview sessions. Both interviews required him to wake up as early as 6 am to reach the hut[2].

In the viral video shared by his older brother, Mario, Frank sat in a small hut built by his father, Sa Ujom, for the interview.

The hut was equipped with a bemban mat, a Pua Kumbu backdrop and a chair to ensure he was comfortable the whole duration. But, during the interview, Frank endured being bitten by leeches and sat on wet ground. Even with the discomfort, he persisted and shared that the interview had gone well.

Hard work never betrays anyone. Frank was offered a place in UPSI with the deputy vice-chancellor of UPSI (student affairs and alumni), Assoc Prof Dr Norkhalid Salimin personally presented him with the offer letter at the Betong District Education Office.

I feel so happy as I have received an offer from UPSI, and I will study very hard to attain success. I will not let this opportunity slip past. – Frank Steward Panting Sa[1]

Frank Is One Of Many Sarawakians Living With Limited Internet

But Frank’s story is one of the many instances where Internet connectivity had become a hindrance to the folks in East Malaysia. It highlights the deeper issue faced by the community not just in Pakan, but in rural Malaysia.

At least 31% (178 out of 574)[3] of respondents from rural Sarawak and Sabah reported that to have a stable Internet, they would have to travel out of their house[3].

The responses of the villagers and residents of East Malaysia did not tally with the national statistics indicating the 91.7% internet penetration of each household. The rate has been on a steady incline from 87% in 2018 to 90.1% in 2019[4].

If Internet access is suggested to be improving, why are stories like Frank still making the headlines?

In addition, Dr Nuurianti’s study indicates a general dissatisfaction amongst the locals with the current Internet coverage.

The answer lies within the loophole when operators are awarded spectrum by the government. It specifies that the operator must provide connectivity to 95% of the population, not 95% of the geographical area[5]. In rural areas where the population doesn’t reach 95%, the operators have the leeway of not providing the coverage fully.

The rural areas contain only about 5% of the population, the operators have the flexibility of not covering these areas. It is their prerogative and you can’t do anything about it. – Nor Zachy Fernandez, Xair group of companies managing director[5]

In Sarawak, the telecommunications infrastructure provider, Sacofa Sdn Bhd in collaboration with the state and the federal government is on its mission to expand its telecommunication footprint in rural areas through fiberising more than 700 towers[5], for high-speed broadband service. In low-density population areas, the company turned to more viable means such as wireless transmission and VSAT to extend their services.

But with stories like Frank, stakeholders have got their work cut out to narrow the apparent divide in the underserved community and the rest of the country. The challenge in Sarawak also involves scattered rural communities settlements across remote areas.

The lack of basic amenities such as roads, water and commercial power supply in some of these areas has given rise to some of the challenges Sacofa faces when deploying telecommunications in such places. The lack of surfaced roads to these remote areas leads to inaccessibility. – Sacofa Sdn Bhd statement on the challenges improving Internet connectivity in rural Sarawak[5]

It is also the hope of Frank, that it is not just better Internet connectivity but improved road access for the villagers.

We are also hoping for a tar road because Pakan is connected only by dirt roads. – Frank Steward Panting Sa[2]

Digital Connectivity Is The Way Forward

Frank’s predicament has caught the attention of the Malaysian Communications and Multimedia Commission (MCMC), promising that the relevant parties are working together to ensure a better Internet experience at the Pakan longhouse[6].

In 2021, the state government expressed their commitment to providing high-speed internet to at least 90% of Sarawak with an injection of RM 4 billion[7].

Year after year, changing leaderships have placed better internet connectivity as a priority on their list. In the recent 12th Malaysia Plan, the government acknowledges the divisive line the digital gap has created inequalities in accessing economic opportunities and the pandemic had only made the issue glaring[8].

Without the pandemic and the need to have home classrooms, we would have never realised that basic connectivity was still lacking after billions were spent for the TIME USP tower initiative [Universal Service Provision, an initiative to provide towers in rural areas for Internet connectivity]. – Nor Zachy Fernandez, Xair group of companies managing director[9]

The government rolled out Jaringan Prihatin, an initiative to address the digital divide among the B40 community in 2021[10]. Even so, the broadband subscription has remained low and signing up for one is still costly for low-income households.

Relying on the government-run WiFi connection is unreliable at its best. Most rural dwellers such as the residents in the longhouses in Pakan are trapped in an uncertain position.

As the country sets abuzz with more digitalisation and racing to be a part of Industrial Revolution 4.0, many are still left far behind without digital connectivity.

There have been reports that with the limited coverage and access to the Internet, educators in rural Sarawak have relied on sending lessons and homework through Whatsapp and Facebook chat to ensure learning is taking place[3]. The students in rural Limbang spent more than 30 minutes each day sitting on dirt roads[12].

The situation faced by the PdPR (Teaching-Learning From Home) students in UIu Medamit. They have to make do with internet connectivity that comes and goes; they wait for 30 minutes up to one hour to regain the signal. It is very difficult for these children to study; it’s not too warm in the early morning, but as noon approaches, it can get quite hot. – Paulus Palu Gumbang, Batu Danau assemblyman[12]

With limited Internet connection, youth and families in rural Malaysia are trapped in a poverty cycle without being exposed to different career pathways and ways to gain more income.

There remain pockets of communities, especially in rural areas and urban poor areas. They have not been able to fully harness the power of digitally-enabled income opportunities due to the inconsistent or poor quality of Internet connectivity. – Sumitra Nair, MDEC vice president, Talent & Digital Entrepreneurship[13]

Take, for example, the experience of Fintech Lab executive director, Baiza Bain. His trip to Sabah to spearhead the Technopreneur Development Programme, an initiative to help 10 rural entrepreneurs provided him with an eye-opening experience[5].

In my experience, when developing rural entrepreneurs in Sabah, the connectivity hurdle was the hardest to overcome.

These entrepreneurs were very dedicated and diligent in embracing digital knowledge, but the application of such knowledge was made impossible when they could not get a stable internet line in their villages.

The leaps and bounds of digitalisation could help rural farmers escape poverty yet many have limited access to it. Nancy Anol, a farmer in Simanggang, Sarawak, experienced the transformational effect of the Internet on her income when she started working together with a social enterprise, Sluvi Natural.

To be honest, we didn’t even have an Internet connection and Whatsapp installed on the phone before. We knew the Internet existed but were never made aware of the implications of having it, especially when running a business. Thankfully, we were taught about how to use smartphones and related digital information. So when the lockdown was imposed, our work continued as usual with the help of video calls and messaging apps. – Nancy Anol , A single mother farming with Sluvi in Simanggang, Sarawak.

Handouts are great and welcomed for survival but witnessing rural dwellers like Frank climbing out the socio-economic ladder through pursuing his further education is miles better. Not just that, the increase in income through placing digitalisation in rural business is only possible with a stable Internet connection.

But the issue of the digital divide is also a shared concern in Southeast Asia. Approximately 150 million (31%) adult individuals in Southeast Asia digitally excluded in 2021. Some lack access to communication technologies, and others have low levels of digital literacy [14].

If governments around Southeast Asia can bridge communities and narrow the gaps caused by the digital divide, at least USD 15 billion in revenue and savings can be gained yearly.

At least USD15 billion in revenue and savings per year can be unlocked in Southeast Asia by bridging the digital divide. – Mr John Low, senior partner and co-author of Bridging The Digital Divide [15]

The Roland Berger’s Digital Inclusion Index (RB DII) indicates that Malaysia isn’t lagging too far behind and is seen as a contender behind Singapore in Southeast Asia. On the same indicator, Malaysia ranked 21st globally[14]. Even though our workforce is gearing up for digitalisation, it remains a necessity for no individual to be left behind when it comes to digital nationwide participation.

The biggest hurdle in achieving digital transformation remains the lack of consistent, high-quality infrastructure and digital access for the lower-income households in urban and rural areas.

Late last year, the discourse when it comes to digital Malaysia is the rolling out of 5G. But with stories like Frank, the students in Limbang cropping out from time to time, perhaps, the focus should be ensuring a stable Internet for all.

To urban dwellers, slow Internet might mean slower streaming speed but to underserved communities, it is a matter of gaining a proper education, attending a job interview or even selling their goods online. Mario Sa’s intention of recording his brother was to document the moment. But the video that has gained traction is also a painful reminder to many of us.

As we harp on greater heights, it is just as important to ensure no community is left behind under the pretence of progress.