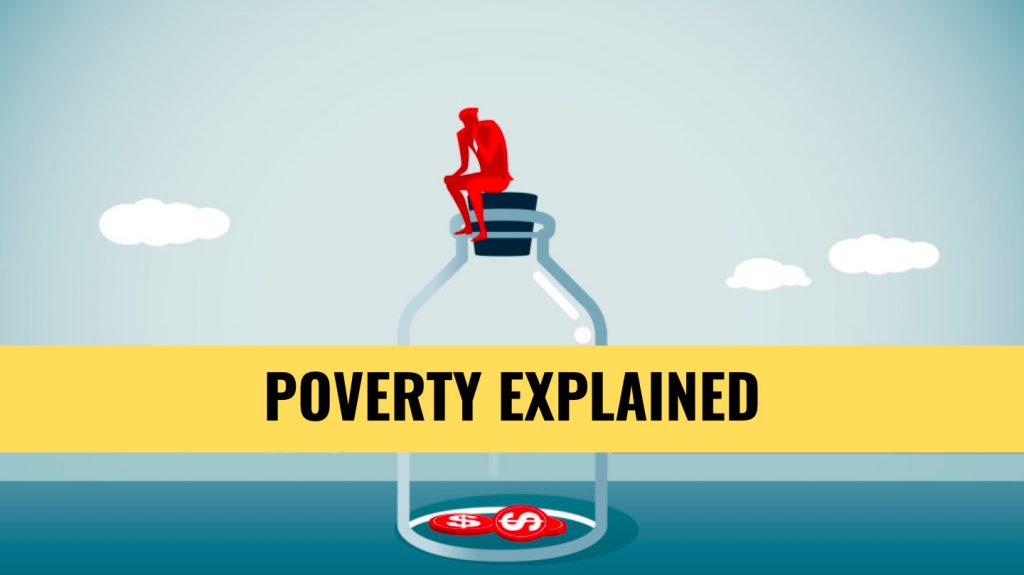 Poverty affects millions of people globally. In fact, when you think about someone who is living in poverty, you will probably have an image of someone skinny and scrawny, someone who lives in a shack or rundown house, someone who doesn’t have enough money to buy nutritional or good food and necessities. While you may not be wrong, it is all too easy to stereotype the poor.

There is more than meets the eye. Poverty is not just about the lack of money or basic material possessions, but it also includes issues of access to basic rights and services such as education and healthcare. Poverty is about the absence of or the lack of equality and respect for all people.

By now, you can probably guess that poverty is not a simple term to define. In fact, there is no singular definition of what poverty is. It is a complex issue with many causes and solutions. But, we can all agree that a world without poverty would be a better place.

That’s why we have put together a quick explainer on poverty – what it is, how is Malaysia fairing, why it matters, and what you can do to alleviate it.

What is the definition of poverty?

The World Bank defines poverty as the ‘inability to attain a minimal standard of living[1]. Globally, those living on less than $3.10 a day are considered poor[2]. According to Investopedia poverty is a state in which a person or community lacks the financial resources and essentials for a minimum standard of living[3]. Whilst many correlate poverty with income, it goes beyond one’s salary. Poor people lack the means to meet necessities, are deprived of proper housing, sanitation, food, education and much more[3]. Poverty is multidimensional.

What is the Poverty Line Index (PLI)?

Malaysia’s poverty line, called Poverty Line Index (PLI), is a measurement of absolute poverty. The PLI is based on the gross monthly household income required to meet basic needs, including food and non-food items(clothing, rent, transportation, etc). A household with a gross income below PLI is defined as absolute poor and a household with a gross income less than half of PLI is defined as hardcore poor[4].

Previously, Malaysia’s national PLI was RM980 a month. This PLI implied that an urban family of four would have to survive on RM8 per person, per day. It was later revised to RM2,208 in 2019[4]. It’s also important to note that Malaysia’s PLI differs in East and West Malaysia as the cost of living in both regions are different.

What is the difference between absolute poverty and relative poverty?

Relative poverty is when a household earns less than the poverty line in the specific region they live in. Relative poverty varies depending on the location, as different regions have different costs of living. Those who fall under relative poverty are struggling to maintain an ‘average’ standard of living. For example, even though a family can afford to buy food and have shelter, they are still considered poor if they are unable to send their children to school because of the lack of access or other factors that limit them[1].

Is poverty only about money?

Poverty is definitely not just about how much money you make or have. The United Nations Development Programme analyses poverty through the Multidimensional Poverty Index. This index measures poverty across three dimensions which are further broken down into ten indicators of poverty. These include health (child mortality, nutrition), education (years of schooling, enrollment), and living standards (water, sanitation, electricity, cooking fuel, floor, assets)[6].

What are the different types of poor?

We explained the difference between Absolute and Relative poverty earlier – but in fact, there are various types of poverty that give more explanation on how people arrive at the state of poverty and the area they are living in.

What is Malaysia’s poverty rate and how was it before?

What does B40 actually mean?

Where does Malaysia rank in comparison with other countries?

To lower its national poverty rate, its people have to have access to education, proper healthcare, access to clean water, and job opportunities to aid their financial situation. The Organization of Economic Co-operation and Development (OECD) defines the poverty rate as ‘the number of people in a given age group, whose income falls below the poverty line’[8].

Who is most affected by poverty in Malaysia?

There are many vulnerable communities in Malaysia. Struggling households can be found throughout the country. Poverty can be found in children, adults and even the elderly. While the scope of poverty is focused on the B40s, Malaysia’s poor are also highly concentrated among marginalised communities such as refugees, the Stateless, homeless, Orang Asli’s and even native Malaysians (Orang Asal).

Where are the poor in Malaysia?

According to a Household Income survey of each district, the vast majority of Malaysian districts fall under the B40 category. As of 2020, Sabah has the highest poverty rate in the country at 19.5%. Kelantan is second with a poverty rate of 12.4% and Sarawak takes third at 9%[10].

Which places in Malaysia are most affected by poverty?

What can I do to help alleviate poverty?

Since poverty is so diverse, there are many ways to help address the problem. Yes, you can donate to those in need, but always ensure you are taking the necessary steps to make sure that your money is going to the right place.

There are limitless organizations that would welcome you with open arms for those interested in donating their time. In the education sector, there is Teach for Malaysia and Borneo Komrad have stepped up to guide the next generation.  In terms of food and nutrition, countless food banks can be found throughout the nation.

Some want to help give long term support to those in need. These companies work towards upskilling the vulnerable community and providing them with job opportunities and skills that will aid them to generate income independently.

You can also think creatively about how you can use your talent and network to create change. Wiki Impact listed seven awesome ways to make a difference. In case you are wondering “Where are the poor in Malaysia?” and “Who Are The Changemakers In My Area?” – figure out no more. Head over to our comprehensive maps and begin that journey of giving back.