Pepper Cloud: Cloud Kitchens For B40 And Unemployed Youth (A New Venture By Masala Wheels) 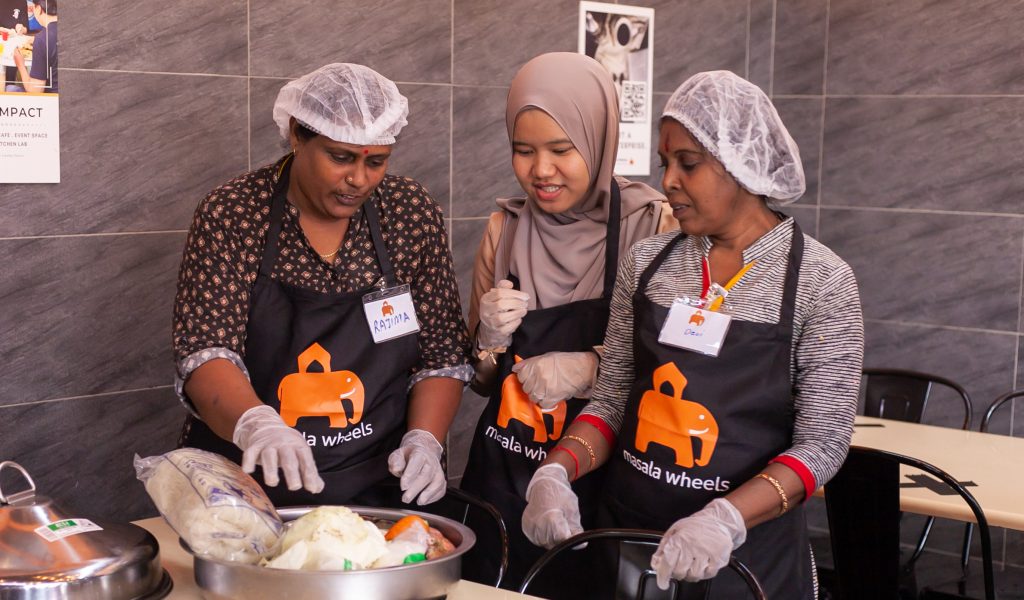 An a-ha moment over a cup of teh tarik at a Mamak restaurant was the start of the acclaimed social enterprise, Masala Wheels in 2015. It stemmed from the need of Kuhan Pathy and his friends to help their hospitalised peer after yet another gang fight. Through a quick scroll on mudah.my, an old pasar malam food truck was purchased at RM15,000. After a lick of fresh paint, their friend cruised the streets of Kuala Lumpur and sold Indian delicacies using a food truck.

Since then, it has grown from strength to strength. Now, they have an outlet in Petaling Jaya and impacted over 350 beneficiaries by giving them employment, food and a future[1].

Masala Wheels also received a nod of approval for their mission to provide a better livelihood for school dropouts and youth involved in gangsterism from the former President of the USA, Barack Obama in 2016.

With the exponential growth and the need to assist more marginalised individuals in the community, Pepper Labs was founded as a holding company, and Masala Wheels is managed under it. The social enterprise chain also drives social transformation through initiatives such as mobilefood.my and pulSE.

The Evolution Of Masala Wheels

With seven years of involvement in the impact space, the social enterprise has only continued to evolve with time. The bottom-up approach they have taken when serving marginalised communities has gained the support of various foundations and corporations over the years.

It is a change that the founder of Masala Wheels, Kuhan Pathy welcomes.

In 2015, there was only MaGIC (Malaysian Global Innovation and Creativity Centre) guiding us.  In the past few years, we saw more institutions and foundations coming on board and now we are starting to talk about impact investment. That shows a great deal when it comes to institutionalisation, be it through policy, regulatory framework or even financial institutions. – Kuhan Pathy, founder of Masala Wheels

A significant collaboration the team has embarked on was one with 50 micro-entrepreneurs at the start of the pandemic in 2020 funded by Yayasan Hasanah.

The pandemic had taken many of them out of jobs.  So we take them [B40s] in and transform them into entrepreneurs and kickstart and help them to scale their businesses. – Kuhan Pathy, founder of Masala Wheels

The programme brought the team to unearth a hidden gem from PPR (Projek Perumahan Rakyat) Permai, in the form of Madam Saraswathy Periyasamy, a single mother to four children. Madam Saraswathy was baking cookies for her livelihood pre-pandemic. But with lockdowns and events, the orders she received were few in between.

Madam Saraswathy and her family survived on bread daily. She was struggling to place her children in online classes during the pandemic. – Kuhan Pathy, founder of Masala Wheels

At the start of their initiative, Madam Saraswathy lacked self-confidence and had no means to level up her baking ventures. The team at Masala Wheels stepped in and assisted her in terms of branding, market access and customer management. Soon, she was generating more income, and there were times when she peaked with a revenue of RM6,000.

She now has additional income, better self-confidence and she managed to put all of her four children in school. Even after three years, she is thriving and sustaining her family without resorting to doing odd jobs on the side.– Kuhan Pathy, founder of Masala Wheels

Today, Madam Saraswathy is one of the beneficiaries embarking on Masala Wheels’ new cloud-kitchen venture, Pepper Cloud. Her immense growth is an example that trust and understanding the community’s needs are the keys to helping the marginalised.

Madam Saraswathy had no digital background and rarely stepped out of her house. But now, she is proficiently using Google Docs and she is also teaching her children these technological skills. To me, that’s a success. – Gevi Ananda Roe, lead and head of new ventures at Masala Wheels

Like many others in the F&B sector, the pandemic that hit in 2020 provided the team with a learning curve that had taught them to adapt.

In 2020, when MCO hit us, we had to close down our physical restaurant. That year, in the F&B business, it was ‘do or die’.  If you had not adopted the appropriate digital techs, you would sink.– Kuhan Pathy, founder of Masala Wheels

At the same time, many in the communities had lost their livelihoods either retrenched from their previous jobs or fresh graduates looking for their first jobs. The unemployment rate in May 2020 was soaring at 5.2% (826,100 unemployed Malaysians)[2].

Many in PPR housing were unable to leave their houses needing to tend to their children or elderly.

Kuhan and his team identified a burgeoning need in the market.

We saw that in 2020, there was a surge of people requesting to deliver food to people around – not only from private entities but also from sponsors. Some of the customers needed food to be delivered to their parents for a long duration; “my parents were stuck at home, I need you to deliver food to them for at least a month or so.”– Kuhan Pathy, founder of Masala Wheels

Adapting to the circumstances, they closed one of their outlets in Petaling Jaya and invested in means with a greater reach in the community.

We had two outlets in PJ, so we reduced it to one. We realised the overhead can be reduced. With the closure, we invested more on a platform that we can help to delegate and build up the capacity of people around. – Kuhan Pathy, founder of Masala Wheels

And, that is how Masala Wheels landed on the idea of the cloud kitchen initiative. Over the long run, there are four different business models under their cloud kitchen projects.

Our top priority right now is to extend to the community to be part of our cloud kitchen. It could be someone who lives in a neighbourhood who sees a makcik selling nasi lemak by the roadside, and feel that she should go up to the next level. That’s the person that we want. Or someone who has got an auntie or a relative who is doing home small-based catering and feels like it’s time for her to step up then they should recommend it to us. – Kuhan Pathy, founder of Masala Wheels

The beauty of the initiative is a guaranteed commitment amount of revenue at a minimum of RM1,200 for the next six months. The selected beneficiaries will be provided with the necessary training and mentoring from professionals.

In addition to Madam Saras who was a home-based cook, two chefs, Muhammad Haziq and Chef Naqli who were unemployed during the pandemic are currently onboard the initiative[3]. The chefs are honing their culinary skills and F&B management before launching their very own ventures.

All 15 entrepreneurs will select a cuisine and be trained to perfect their dish and business. Each will be given RM1,200 as their base salary, and all proceeds from their businesses will be kept by them. – Kuhan Pathy, founder of Masala Wheels[3]

But the founder, Kuhan, understands that micro-entrepreneurs may need longer to establish their footing in the business.

We don’t expect everyone to be a capable entrepreneur from the get-go.  It takes time. Some might be capable within 3 months, some might be ready to set off on their own path in 6 months.  And some of them might take a longer time and some might even drop out. Our doors are open and we’ll guide them to push the business further. – Kuhan Pathy, founder of Masala Wheels

Kuhan went through tough times in empowering at-risk youths, to an extent where a member of staff pulled out a knife at him in the past. Sometimes, he felt disheartened to witness two months’ efforts gone to waste in a flick of the moment.

At Masala Wheels, we are always giving that second, the third, that fourth chance. At one point, we’ll be thinking – we should call it a day but we’re still there – seven years and we are still here. – Kuhan Pathy, founder of Masala Wheels

But, these brushes did not deter him and the team from transforming more lives of marginalised communities. It was also what made his job more fulfilling when the opportunities did reap their benefits.

Second chances are always there. And now through Pepper Cloud, they are set to provide a much-needed opportunity to the unemployed and the B40 communities who need the push to accelerate their business.