Pandelela Rinong: From A Small Village In Sarawak To An Olympian 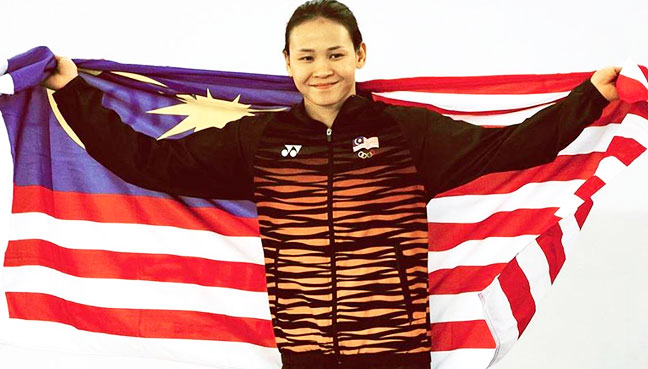 She goes by a unique sounding name and she is a two time Olympic medalist, and a five time medalist at FINA World Aquatics Championship. Those are her most notable accomplishments to date, but how much do we know about Sarawak born, Malaysian diver Pandelela Rinong?

Her beginnings are very humble. Pandelela grew up in the Bidayuh village of Kupuo Jugan in Sarawak. She’s the second child of four siblings and her father worked as a labour worker to keep the family afloat.

The athlete admitted to growing up poor but she never clearly specified the extent of her financial struggles as a child. She did mention that her dad was paid daily for his work. Witnessing this as a child, Pandelela learned some significant life lessons. In particular, the importance of distinguishing ‘need’ from ‘want’.

She told a story about wanting a miniature kitchen set when she was five years old. Although her father refused, little Pandelela threw a tantrum until he relented. He cautioned her that she would be quickly bored with it once she received it and her father would be the one to clean up the mess. True to that, Pandelela lost interest in her new gift.

Ever since, her father would remind her of this incident whenever she wanted material things. Her father had a better suggestion on how to spend her money – to buy food, since it’s something to be enjoyed and it satisfies a human need. Pandelela never forgot this valuable lesson, and became a food lover to boot.

The Dawn Of A Diver

Growing up in the village, Pandelela’s playground was nature. At the age of five, little Pandelela started jumping from the bridge into the river in her village almost daily. Her parents built a makeshift pool made of bricks and cement to quench her thirst for water and diving.

When she was seven years old, Pandelela was discovered in her primary school and offered to be trained in aquatic sports. She ended up being a diver since she wasn’t afraid of heights. This continued until she was 14 years old, where she left home in order to become a national diver. Her goal was to make her family proud and to bring honour to her country.

Pandelela admitted that it wasn’t an easy journey as she had a strict daily schedule. It is said that she trains 8 hours a day, six days a week. She was also far from home and family, forcing her to be independent.

Her great record in the Olympics was not a one time event. Pandelela won the silver medal in the 10m synchronised platform diving with teammate Cheong Jun Hoong at the 2016 Rio Olympics.

She continued to rack up victories by placing and winning up to five medals at the FINA World Aquatics Championship. She has also been given multiple awards due to her illustrious career as an athlete. Her current goal is to conquer the upcoming Tokyo Olympics, especially since it might be her last.

I have faced and gone through many obstacles and challenges. My journey as an athlete has also had its fair share of ups and downs, but I have made it this fat because I was determined and never gave up regardless.

But sports was not the only area she excelled in. Pandelela graduated from the country’s top university, University Malaya in 2018 with a Bachelor’s Degree in Sports Management Science.

It took her five years to earn her degree, seeing as she had to divide her time between training for competitions and studying. But now that she’s got her degree, Pandelela is eager to finally be able to fully concentrate on her career as a diver.

Through her hectic schedule and demanding training regiment, Pandelela Rinong mentioned that the key to her success is will power and sheer determination, never giving up as she fought for her goals.

My advice to youth out there is to never give up or buckle. Push on with your efforts to realise your respective dreams.