One Man’s Trash Is Another Family’s Meal 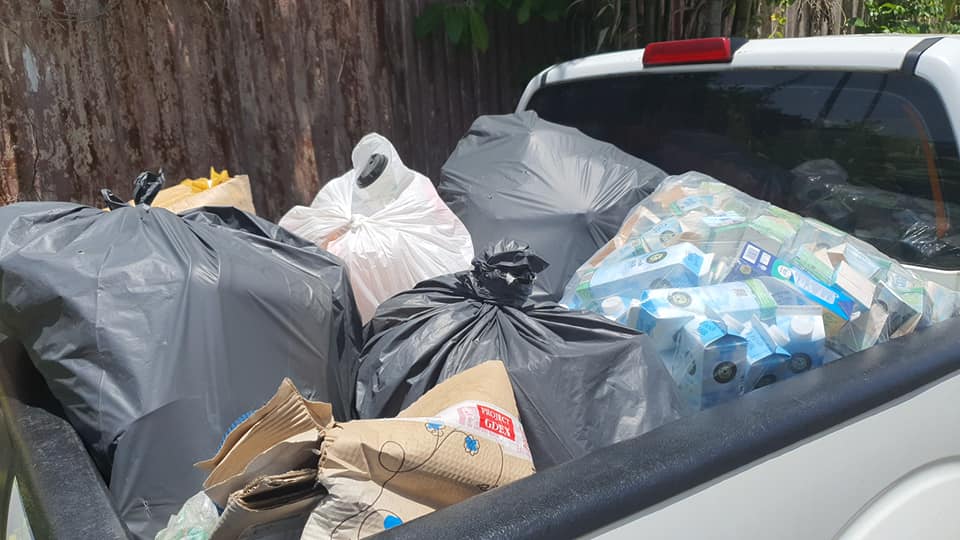 Milk cartons, aluminium cans, large cooking oil bottles and plastic takeaway boxes – these are common items that households still chuck out on a regular basis. It’s trash – dirty, unwanted and mostly useless. While some households will recycle these items, it’s unfortunate that most Malaysians are still in the habit of tossing them into the bin.

For Gregory Tan, who resides in Kota Kinabalu, Sabah, these items are not just recyclable goods – but they are items of value and with a decent price tag. Gregory is even willing to drive to multiple housing areas to collect these items from individual households.

This is not his day job though. Gregory owns a building material supply store and owns a Western food restaurant in Kota Kinabalu. This 36-year-old, father of one was moved with compassion to do something for Sabah’s stateless communities and single mothers in Kota Kinabalu.

Since the first MCO in March of 2020, the named demographic have been badly affected by prolonged lockdowns and job loss. Gregory took it upon himself to raise funds among his friends and family to buy food baskets. However, the funds didn’t last long as the needs continued to mount.

I felt that always going around asking for money to pay for food baskets will not work in the long run. I was worried that people might begin to question my motives. I knew I had to do something else.

Getting Inspiration From ‘Green Friends’

A tree hugger at heart, Gregory is very much aware of the environmental impacts associated with the waste households generate. Starting from home, he has been recycling, reusing and reducing one-off items such as plastic bags and food containers. He teaches his 2-year-old daughter to separate trash according to colours and into different bins.

When he asked his tree hugger friends for ideas on what he could do to raise more money, his friends suggested that he send recyclable items to the recycling centre in exchange for money to buy food baskets.

It was an awesome idea and since then, ‘Trash for Love’ was born.

At first, Gregory only told his close friends and family about his project, but later, he decided to announce it on a Facebook group called ‘Zero Waste Sabah’. The green panthers on this page pounced on the idea with much enthusiasm as everyone was on the same page about reducing waste and living greener lifestyles.

His inbox started flooding with requests for him to pick up recyclables. In between work hours or when he has a little bit of downtime, Gregory will drive to different houses to pick up these items. He worked out a system for people living near his housing area to drop off their recyclables at his doorstep to reduce travelling.

Given Gregory’s flexible time schedule, he makes trips to the local recycling centres several times a week. According to Gregory, there are three big-scale recycling centres in Kota Kinabalu located in Inanam, Putatan and Bundusan.

Reality of Returns From Recyclables

The recyclable items sent to the centres are calculated by kilograms and the types of materials. Though Gregory sends truckloads of recyclables on a weekly basis, the returns are not huge.

I think this is also another reason why people don’t take recycling seriously. They have to travel far to the recycling facility, just to get back a few bucks. It’s a hassle for them.

Besides the lack of awareness surrounding recycling, Gregory is deeply concerned about the amount of waste generated by the average household. Being a restaurant owner himself, Gregory is aware of how much waste is being disposed of by larger entities such as hotels and restaurants – and usually, it’s irresponsibly.

I’ve seen hotel workers secretly disposing of their trash into the ocean. The result? The trash washes onto the shores of our beautiful Pulau Gaya. We are really seeing the consequences of our actions.

Malaysia is reportedly facing a Municipal Solid Waste (MSW) crisis, generating 33000 tonnes per day, equivalent to 1.17 kg of trash person, per day[1]. Gregory urges Malaysians to think a little harder on how much we put in the bin and consider options to reduce trash.

Although the grim truth that recyclables will only yield low returns is here to stay, Gregory has been consistently picking up recyclables and selling them to centres to build the ‘Trash for Love’ fund.

Little by little, the monies added up and he was able to purchase more food baskets to feed the families of single mothers and the stateless households as they hold a special place in his heart.

The list of beneficiaries are growing by the day. I have at least 80 single mother households that are in need of support. Sometimes I feel like I can’t keep up because goods are expensive, especially milk powder for babies. I just do my best.

The majority of Sabah’s stateless and undocumented residents are denied access to a range of basic rights and protection, including freedom from arbitrary detention and deportation, education and healthcare. Since the beginning of the pandemic, the Malaysian government has proved its chronic marginalisation of its non-citizens, including the lack of eligibility for social safety net protections, cramped living conditions, employment in high-risk labour market sectors and the risk of arrest and detention[2].

I feel deeply for the stateless community. They have been here for three or four generations, and yet the government refuses to provide aid for them because of their stateless status. They have no choice but to be here. You can’t send them back to their home country, they don’t belong there either.

When asked about Trash For Love’s future plans, Gregory dreams of organising a clean-up activity on Mount Kinabalu, alongside his environmentalist friends.

It’s the least we can do for Mother Nature. I know there are many hikers who claim to love nature, and yet throw their trash when they reach the peak (of Mt. Kinabalu).

This article was written by Rachel Tan and edited by the Wiki Impact team. All photos in this article are used with permission from Gregory’s Facebook page.