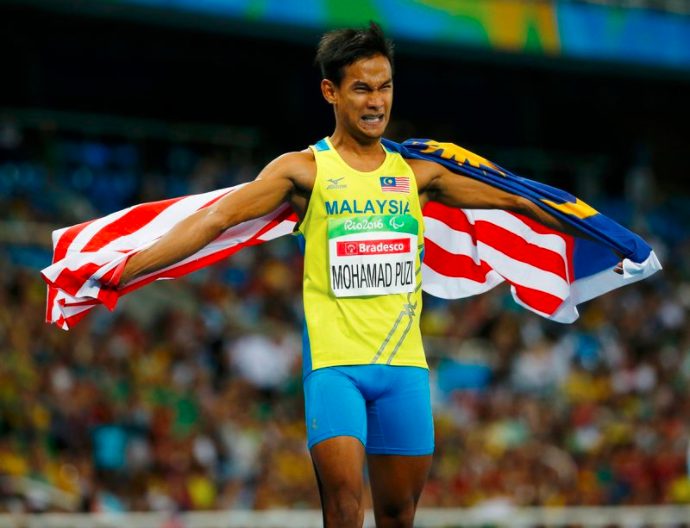 There has never been someone more determined to get rid of the small hand and make history in 2016, as the first Malaysian athlete to achieve Gold at the Paralympic games. It’s hard to believe the number of challenges that Mohamad Ridzuan Mohamad Puzi, the paralympic gold medalist had to overcome.

At the age of one, Mohamad Ridzuan was diagnosed with cerebral palsy[1]. A neurological disorder caused by a non-progressive brain injury or malformation that occurs while the child’s brain is being developed. This incurable state, although non-life-threatening, primarily affects body movement and muscle coordination, muscle tone, reflex, posture and balance. It can also impact fine motor skills, gross motor skills and oral motor functioning[1].

In severe cases, balance, posture, and coordination can also be affected, so doing basic tasks like walking or sitting may be difficult and running would definitely not be easy.

So How Did Ridzuan Become A World-Class Paralympian?

Ridzuan was not one to strive for academic excellence. As a matter of fact, he would often skip school. Due to the sickness, Ridzuan struggled to read or even write his own name[2]. This quickly dampened his educational drive.

It was during this time that Ridzuan’s father decided to send him to be trained in furniture-making in hopes that he can potentially have a future in that and care for himself[3]. The training centre was in Cuping, Perlis.

It was at this time that Ridzuan was first spotted by Affizam Amdan, a volunteer at the Perlis Social Welfare Department who was helping to coach OKU (persons with disabilities) athletes.

During a talent search organised by the Malaysian Youth and Sports Ministry in Perils, Malaysia in 2004, Coach Affizam took it upon himself to change this young boy’s life by driving him to and fro for sports training.

He even used his own money to renovate a small room for Ridzuan and his friends for simple and comfortable living. The room had a bunk bed, a ceiling fan, a slim wooden cupboard, and a 14-inch television.

Affizam stayed by Ridzuan’s side and continued developing and training him for six years until 2010[2].

Good quality sportswear, shoes and healthy meals are just the basics needed to excel in any sport. But Ridzuan could not afford to pay for it without working. During an interview, Ridzuan mentioned that whilst he trained; he would work at a local nasi lemak stall to earn extra money[3].

Ridzuan would work shifts, selling nasi lemak in the morning and burgers at night – while training a good part of the day. His job scope also included washing dishes, and all this labour would earn him approximately RM15 per day, roughly RM450 a month.

Along the way, Ridzuan met kind souls like Chuah Heng Oon who generously sponsored him a good pair of shoes that cost about RM200. “Uncle Heng Oon” as he is fondly known by Ridzuan was a lorry driver in Perlis. He was moved by Ridzuan’s story and admired the young lad’s persistence.

“One day, Affizam told me he was looking for someone to sponsor a pair of running shoes that cost RM200, for Ridzuan, as he couldn’t afford to buy new ones. His shoes were too old and worn out to be used. It wasn’t long after I gave him the shoes that I received news that he had been chosen to be one of the National Athletes,” said Heng Oon[4].

Breaking The Barriers One After Another

Ridzuan made his professional debut in the ASEAN Para Games at Surakarta, Central Java, Indonesia 2011 where he bagged a gold medal in his debut competition[5]. He later proceeded to break the T36 100m world record at the 2018 Asian Para Games in Indonesia.

His slogan of “Fight for Gold” rings true to all those that aspire to be like him[6]. This athlete remains humble and has never forgotten those that helped him. As soon as he returned to Malaysia, he showed his appreciation, thanking Chuah Heng Oon, Affizam and National coach R. Jeganathan, who nurtured Ridzuan into winning his first Paralympic gold.

Nowadays, Ridzuan is more commonly known as Mr Dash, with multiple awards and honours under his name. Having travelled the world, this young boy from Perlis is a sports icon. Currently living in Kuala Lumpur and keeping up with his training regime, staying safe and healthy.

Even now, he remains an inspiration to all that the cards you were dealt at birth, do not determine who you are.