The floods that hit Beaufort, Sabah in May 2021 left many villages cut off from the outside world. Power lines were affected, clean water supply ceased and villages were forced to live off whatever food supply they had at home.

Word got to Adrian Edy and he immediately mobilised fundraising and efforts to send food aid and relief to the villagers. He personally travelled to Kampung Long Pasia after the flood subsided, got on a boat and trekked paddy fields to deliver food packs to families.

The villagers were surprised to see me there as they were not expecting any help. Some of the houses were spared because they were on stilts, but they were not getting any food supplies and were grateful for the help[1]. – Adrian Edy

The Pandemic Transformed The Young Actor

The boyish 25-year-old, Adrian Edy or more fondly known as ‘Edy’ previously starred in some local series such as Gaduh Gaduh Sayang and a travel vlog with Hannah Delisha called #expeRIAnce Ready Set Action. As social media boomed, Edy started to dabble with content creation and gained a steady following on platforms such as TikTok, Dubsmash and Instagram[2].

When the pandemic hit, his acting career took a pause and he found himself stuck at home scrolling through social media. He stumbled on Ebit Lew, the well-known self-made philanthropist’s account and could not stop watching his videos and posts on the good work he was doing.

I was moved by the plight of Malaysians and I realised how fortunate I am. So instead of sitting around, I was determined to do something beneficial. I was really inspired by Ebit’s efforts and thought maybe I can also help in my own way. – Adrian Edy

As a Sabahan living in Papar, Edy didn’t take long to realise that the needs were immense and all it takes is to look around his own ‘backyard’. He used his own money and rallied friends and family to donate and started his first food bank in SK Pomotodon Inanam in September 2020.

The food bank offers all types of basic food such as rice, egg, noodles, milk, sugar and oil and the items are refilled every day at 7am[3]. – Adrian Edy

In just a month of opening, the food bank has helped 100 families get basic supplies that they could not afford or have access to during the lockdown. Sabahan’s in rural areas were badly affected by the pandemic and many of them lost their livelihoods as they were unable to work.

The majority of those living here are in need as they work in the village as farmers, selling their vegetables at the pasar tani. Some of those who visit the food bank live up in the hills and have to walk a distance to come here[3]. – Adrian Edy

Giving RM1 Was A Far Cry

The pandemic hit a lot of people in many different ways. For me, a good thing happened. It opened my eyes to see and moved my heart to action. – Adrian Edy

Edy jovially talks of his past like it was a thing in distant history. He reminisced about the hours spent creating social media content that brought a lot of likes and following but didn’t amount to much substance. He spoke of his old tweets as if it was written by another person.

If you met me before this, I was a completely different person. For me to even give RM1 to another person is difficult. The Edy that you see now is totally different from the Edy before. A miracle happened within. – Adrian Edy

His sudden miraculous change even surprised his own family and close friends. As time passed, he was able to win them over and proved to them that this newfound passion to serve and give is here to stay. But it didn’t stop others from pointing a finger.

Some of my friends couldn’t believe what I was doing and they said all kinds of things – but I just have to continue doing good work and try to ignore the bad comments. As long as I know my intentions, I’m fine. – Adrian Edy

The Balance Between Publicity and Philanthropy

Edy’s social media accounts are constantly updated with stories of his giving. The online conversations that he engages in are all about helping the poor, donation drives and food aid.

As an emerging philanthropist, Edy is mindful of the backlash he may receive from the constant publicity of all his efforts. However, he believes that storytelling is important and essential for awareness and accountability.

Of course, I have received comments on why I am so open with my postings, but I need to do it because donors have entrusted me with the money and need to know where the money has gone and who they are helping. – Adrian Edy

A year into the pandemic and still going strong, Edy believes that more people can benefit from these stories and be part of the change that Malaysia needs.

While the pandemic can come under control with vaccination drives ramping up, the impacts of the pandemic are here to stay. Edy’s spark of charity started with a food bank but he has dreams to expand his reach to other parts of Sabah and even to Kelantan.

Incidentally, the Department of Statistics reported in 2019 that Sabah and Kelantan were at the top in terms of poverty rates, at 19.5% and 12.4% respectively[4]. Alongside government aid, these states benefit greatly from the efforts and programs run by independent NGOs and local changemakers to alleviate absolute poverty.

Since the pandemic I have been to many districts in Sabah including Pitas, Kota Marudu and Beaufort and the needs are many. By the end of the year, God willing, I hope to travel to all the districts in Sabah and reach communities that are hard to get to. – Adrian Edy

Edy’s form of philanthropy is not theoretical or academic. This whole year he has been learning on-the-job, asking questions, getting to know different communities, listening to their needs and mobilising resources where it is most needed.

He credits his motivation to the stories he receives every now and then and he looks up to good folks like Uncle Kentang and Ebit Lew to keep him going. Edy admits that he still has a lot to learn.

I recently received a text from a family I helped. I gave the children handphones to help them stay connected and attend online class and recently, I received news that one of the children was awarded student of the year. They are so thankful for the handphones, but I’m so proud of them and surprised they even remember me. – Adrian Edy

Edy stumbled into this purposeful path and sees a future filled with hope. He relates to his peers who are hooked on social media, but he also wants others to know that helping another person doesn’t take much – and it definitely doesn’t take a person with a huge social media following to do good.

If you feel it in your heart to help, just do it. Don’t wait around, overthink things, allow fear or doubts to stop you. Use social media to influence others to do good. Share positivity, good news because all of us are influencers. – Adrian Edy 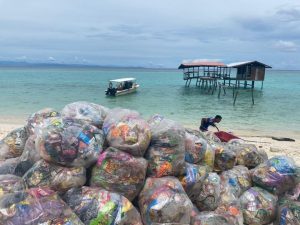 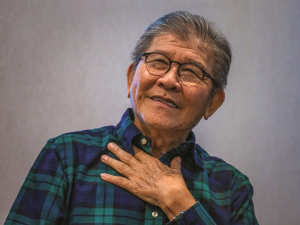