Lee Thiam Wah: ‘The King of Mini Marts’ In Malaysia 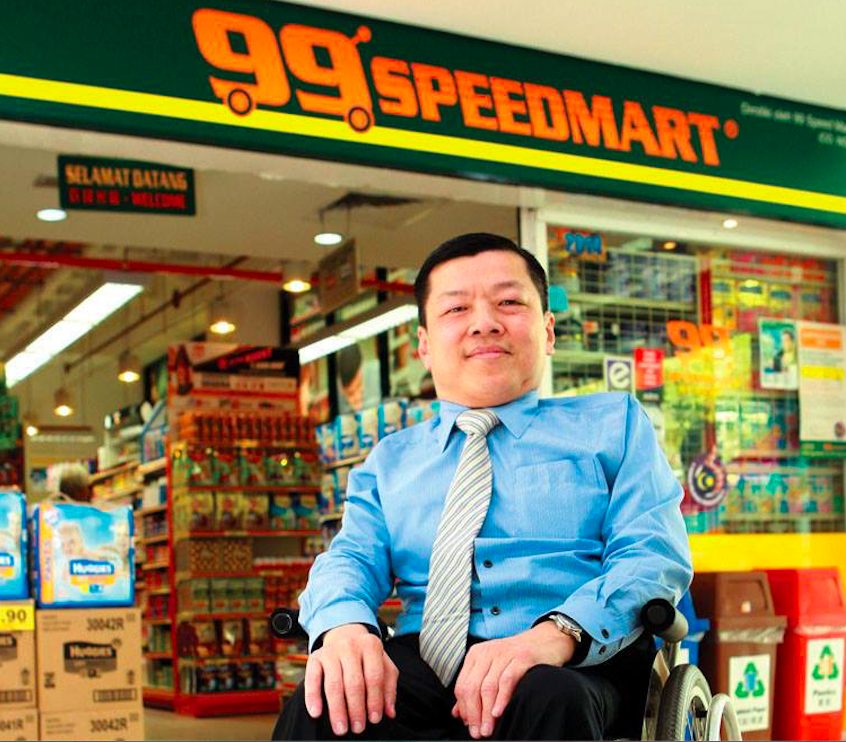 Who is Lee Thiam Wah? Have you ever noticed the 99 Speedmarts all around you? Well, he’s the man behind it. Dubbed as the ‘King of Mini Marts’, Lee was born in 1964 in Klang. As a baby, Lee suffered a severe case of polio and as a result, he lost his legs. Since then, he has been wheelchair-bound[1].

Lee grew up poor, his father worked as a construction worker while his mother was a hawker. Because of this, they were only able to support his education up until primary school. The family could not even afford the transportation fee because the secondary school was too far away[1].

Coming from a low-income family, my parents kept themselves busy with work to provide for us, and as a result, they did not have much time for me. But I was lucky to have my grandmother, who cared for me and taught me the values of life[2].

Young Businessman In The Making

Lee had 10 other siblings and while his parents worked, his grandmother took care of them. He knew he had to work hard in order to become successful. At 14 years old, Lee started a small business selling snacks outside his family home in Jalan Kampar, Klang.

Lee was also an avid learner. He spent a lot of time reading newspapers and magazines. He would also borrow books from his neighbours to quench his growing thirst to gain knowledge[1].

Throughout his youth, Lee was focused on helping his family and saving up for his own grocery shop. In 1987, 23-year-old Lee had managed to save RM17,000. He invested all the money into his first grocery shop which he named ‘Pasaraya Hiap Hoe’ along Tepi Sungai in Klang.

Later on, the business was sold to a relative and the funds were used to open the very first ‘Pasar Mini 99’ in Klang Utama in 1992. Lee’s goal was to build an integrated chain of mini-marts to communities in Malaysia, selling essential items at affordable prices[1].

Of all the numbers, Lee ended up picking the number 99 as it signifies the nature of imperfection in this world.

We chose the number 99 because it implies that even though we are not perfect, we still aim to offer our customers the best services and products we have at a competitive price. This also reminds us that there is always room for us to improve[2]

No Excuses For Being Disabled

Wheelchair bound, Lee had to rely on relatives’ help to carry heavy items. However, this didn’t deter him from being hands on and involved in the business. The limitations are evident but it doesn’t deter him from trying and giving his best.

I don’t mull over the fact that I’m in a wheelchair, that I can’t speak English and that I only went to school for six years. I have to help myself. Nobody would hire me due to my physical limitation. If you don’t work hard, what will you amount to?[3]

Lee attributes a lot of his success to his grandmother’s encouragement and support. Her words have been a pillar of strength every time self-doubt crept in. In an interview with The Star, Lee shared some words of wisdom that his grandmother told him.

You are only disabled physically, not mentally. You are smart and can still use your hands to do so much more. You will need to be independent and find a way to live or you will be left behind[2].

Lee has been incredibly hands on in the business – from meeting with vendors to putting in the orders and seeing it arrive in his stores. Lee enjoyed the interaction with his suppliers and customers and this became the fuel to grow his business.

You have to be self-reliant. Sure, you have to work harder than anyone else, but the knowledge you gained will build up your self-esteem. Being of use to customers makes me feel grateful and gives me a sense of purpose[3].

In 2000, the business was rebranded to ‘99 Speedmart’ to keep up with times, giving the business a fresh look. In 2006, ‘99 Speedmart’ received its first Consumer Choice Award from the Malaysia’s Ministry of Domestic Trade. The business grew leaps and bounds in quantity and quality.

As of August 2017, 99 Speedmart launched its 1000th outlet in Malaysia. In 2019, the business moved to international shores opening its first outlet in Singapore at 110 Sims Avenue[4].

Lee Thiam Wah’s life is truly inspiring. Hit by tragedy as a baby and born into a low-income family, he had every reason to resign – but through honest hard work, ingenuity and a keen sense of business, he rose to become the King of Mini Marts in Malaysia. His story is tried and true, proving that entrepreneurship (and grit) is one of the best ways to pull families out of poverty.

As of November 2021, 99 Speedmart has 2000 branches nationwide with 3 opened in Singapore[4]. Under their corporate social responsibility arm, 99 Speedmart contributed significantly in the period of 2021. Some notable efforts are: