Khai Aziz & His Punk Band Keeping Youth Away From Drugs 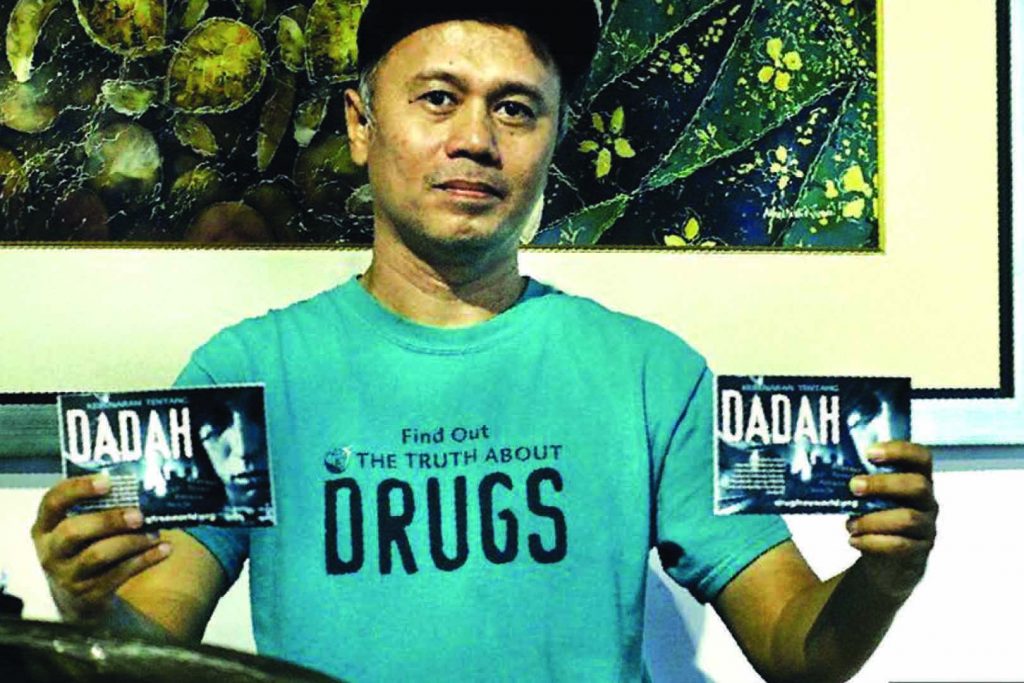 The drug culture in Malaysia, with all its toxicity, is unfortunately still prevalent in Malaysian societies today. Year after year, we see and hear stories of those who have been crippled as a result of drugs and substance abuse. In Malaysia, the National Anti-Drug Agency (AADK) reported a total of 133,684 drug addicts between 2014 and September 2018[1]. This figure does not include druggies in hiding, who often reside in low-cost housing areas and abandoned buildings, which are all spaces for addiction to flourish.

In 2022 between the months of January and April, the AADK reprimanded 1,335 drug addicts in Kuala Lumpur alone. These numbers include drug addicts who were once saved and sent to rehab but later relapsed when exposed to triggering factors[2].

But what many tend to overlook is that drug addiction starts at a young age. Drug pushers would often prey on school-going youth to become distributors and sellers. The financially strapped youth would seize the opportunity to earn more money, unknowing of the horrors that would follow[2].

A Passion For Cultivating A Drug-Free Community In Malaysia

One Malaysian has been working hard to change this dark reality. Klang-born Mohammad Khairuddin Aziz, better known as Khai Aziz, has been working against drug use amongst Malaysian youth for the last 20 years. Khai knows that getting into drug syndicates is easier than getting out – a lesson that many youths learn the hard way.

As a punk rock lover, former band lead singer, and an all-time music enthusiast, he sought to help youth through music and the arts.

However, Khai’s desire to help youths was not something that sprung out of the blue. He was actually inspired by a series of grim events that happened in his life. As a teenager, Khai watched how drugs consumed his elder brother Azhar. Over the years, Azhar’s addiction to heroin changed the course of his life[3].

Although Azhar was musically gifted and was the one who musically inspired Khai, his gift remained untouched. Khai watched his brother gradually fade, knowing his intervention meant little to nothing[3].

He used to go in and out of rehabilitation and his addiction troubled my family a lot. That’s when I started hating drugs. My hatred grew when I worked as a waiter at a nightclub where I used to see with my own eyes drugs being peddled.- Khai Aziz, founder of Drug Free Malaysia (DFM)[3]

Angered by what he witnessed, Khai, a tender 19-year-old at the time, vowed to save the coming generation from falling into such a hideous drug trap. Ever since, he’s also been advocating for a drug-free lifestyle, encouraging others to be more health conscious[3].

The father of four children is also a living example of what he preaches. Khai is adamant about instilling a proper foundation for his children and the youth he meets to ensure that they’re on the right path.

He also makes sure the lives of those he helps are enriched with commendable values such as determination and hard work, while he encourages their zeal for life. By doing so, Khai offers his children and the youth he meets opportunities to recognise their potential and to use it for the greater good.

Khai’s passion for punk rock and music, in general, brought him to greater heights with local and international opportunities extended to him. With his former band Second Combat, Khai’s music portfolio extended to other countries such as the Netherlands, Europe, France, Belgium, the Philippines, the United States, and more[4].

Even with the means to remain and flourish in a foreign country, Khai chose to return home to Malaysia. He had a great desire to give back and help shape the lives of youth-at-risk in Malaysia[4]. Drawing from his own experience growing up, Khai remembers being influenced by peer pressure and bad company.

I was a young boy at the time. I was involved in drugs, smoking and alcohol. But I found ‘Straight Edge’ to be cooler. It told us that you could be into music, into punk rock, but you don’t have to be into drugs and vice. It told us to be clean and to think about the community. It changed my perspective. So, from a risky youth who wanted to try these things, I decided to go straight and direct positive messages through my music.– Khai Aziz, founder of Drug-Free Malaysia (DFM)[5]

In 2010, Khai founded a non-governmental organisation, Drug-Free Malaysia (DFM), promoting a drug-free healthy lifestyle with music and the arts as a gateway. Striving to be unique, DFM seeks to educate youth using different approaches. For example, through skateboarding workshops, community outreach programmes in local universities, drug-free campaigns, and inspirational talks by former drug addicts who have now turned their lives around.

A few bands and thousands of kids have become ‘Straight Edge’ because of me. I even wrote a book called Aku Nak Punk, that helped promote the message of a positive lifestyle. People got to learn from my experience. I received comments that I changed lives through the example I set, my songs and my writing.- Khai Aziz, founder of Drug Free Malaysia (DFM)[5]

To further ensure the work he does is impactful for local youth communities, Khai works closely and gets inspiration from the Los Angeles, California-based Foundation for Drug-Free World of the Americas, a non-profit organisation with goals akin to DFM.

(The Foundation for) Drug-Free World has helped me a lot in my efforts in Malaysia’s drug-free movement as they provided me with anti-drug brochures and modules.–  Khai Aziz, founder of Drug Free Malaysia (DFM)[3]

With great effort, Khai and his team at Drug Free Malaysia have been able to reach over 14,000 students at 126 schools throughout the country.

Shifting Mindsets On Punk Rock And Being A Musician

Khai and his team are made up of musicians, or those who are into the creative arts. He knows the perception formed towards musicians and artists, as these aren’t the typical 9-5 office careers.

In any given Asian setting, the desire to become something other than doctors or lawyers – which are perceived to be more successful – is often frowned upon. Instead, growing up, many have been told to pursue the arts as a hobby and to look for ‘real’ jobs. But Khai is determined to prove that such perceptions are false. He wants to extend opportunities to youth and expose them to the power music holds.

Punk rock or any other music can be enjoyed by anyone without doing drugs and I’ve been able to prove that not all hardcore music lovers are aggressive and on drugs. – Khai Aziz, founder of Drug Free Malaysia (DFM)[3]

He’s also changing the stereotypical mindset and misconceptions associated with punk rock music, a genre of progressive rock mixed with hard-edged melody and singing styles that the public perception commonly associated with drugs or substance abuse.

It’s said that music goes hand in hand with drugs during live performances. But that’s only a perception, just as some people believe that entertainers take drugs to get inspiration and perform more energetically. But we musicians who oppose drug use don’t believe in all those things.– Khai Aziz, founder of Drug Free Malaysia (DFM)[3]

For Khai’s journey as a musician, drugs were not an option, and hard work was the only way he became successful.

Youth Are Full Of Potential But Vulnerable To Influences

In Malaysia, our youth communities have turned towards drugs for several reasons. Some of these reasons include peer pressure, relieving boredom, as a coping mechanism, and living in a high saturation of villages with other people who use drugs[6]. Because of its accessibility and affordability, drug addicts don’t have to go out of their way to secure their drug supply.

We often see a consistent pattern of youth falling into negative influence when no one looks out for them. A prominent negative influence that has consumed Malaysian youth is the ardent support of youths toward the Mat Rempit community, who are often involved in illegal street racing and public disturbances using a motorcycle[6].

Calling For More Catalysts Of Change

Today, we recognise Khai Aziz as a role model and an exemplary figure in the music industry. His dedication to Malaysian youth should inspire others out there to never throw in the towel in dealing with our youth.

Khai took his story of pain and turned it around, impacting thousands. Although two decades of empowering youths wasn’t a bed of roses, he has never once doubted the capabilities youth communities possess.

No matter how many years have gone by, Khai is still actively fighting for a positive change and encourages more Malaysians to take a chance on our youth. We too can become catalysts for change. And by simply investing some of our time to educate our youth, we will be able to make a tremendous impact.