Inspiring Stories: I’m Broke, Tired & Stuck. Is There A Way Out? 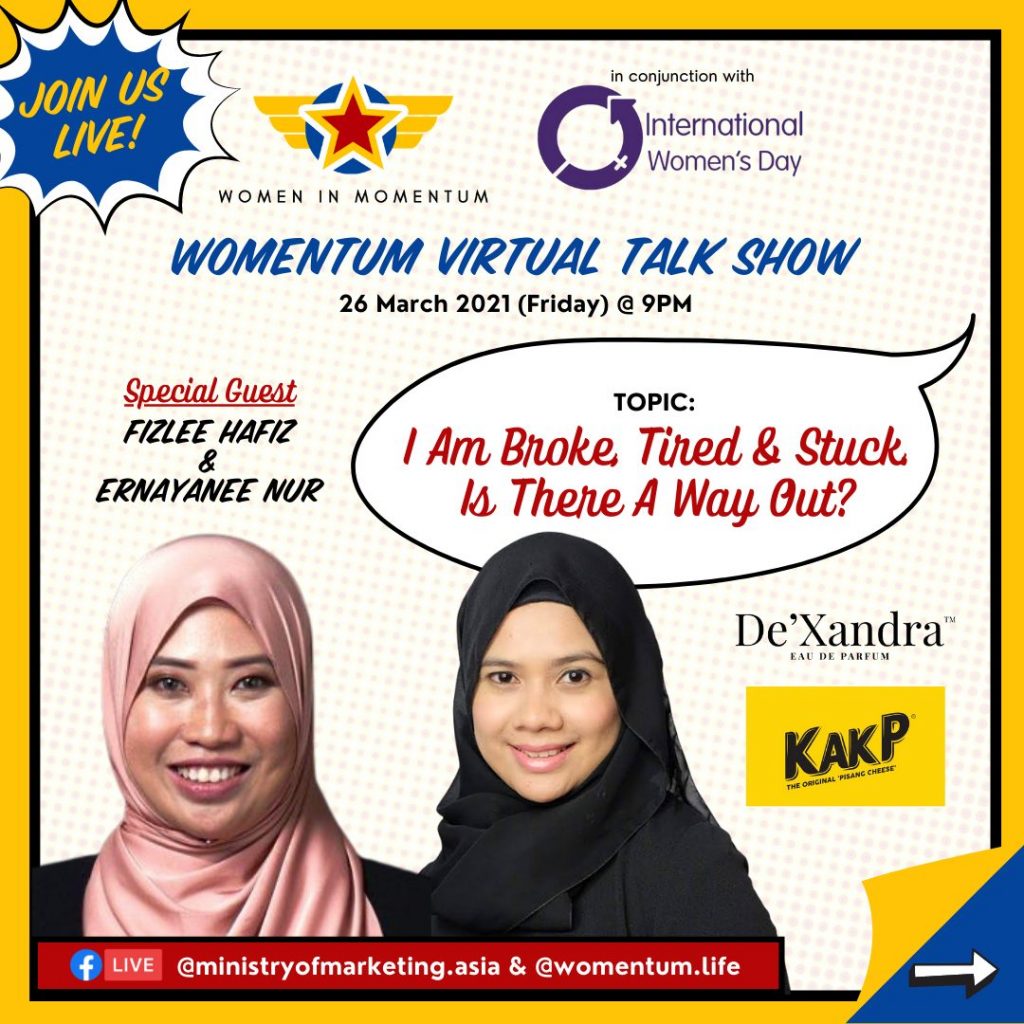 With the economy being at its most vulnerable, job security is on almost every Malaysian’s mind. Those working in industries that have been badly impacted by the pandemic have had to find new jobs in different sectors, daily wage earners have to prepare for unexpected lockdowns ceasing their ability to earn and women who carry the burden of caring and providing for their family are feeling the brunt of concern.

Whether you’re a female head of household or someone struggling to get by during this pandemic – the feeling of being stuck, broke and tired are all very relatable. Financial limitations and struggles are real. Many who have experienced this dire situation may describe it as ‘hardships in life’, ‘no hope’ or ‘mentally stressful’.

However, it is important to remember that today’s struggles are not the end of the road. During a panel discussion on Womentum, on the topic: “I’m Broke, Tired and Stuck. Is There A Way Out?” entrepreneurs Ernayanee Nur Julaimi, Founder of De’Xandra and Fizlee Hafiz, Founder of ‘Kak P Pisang Cheese’ shared their personal stories on how they got out of the financial rut and built a thriving business.

They are both female icons in the male-dominated business world. While it is easy to say they have achieved success and now able to speak confidently, their pioneering days were tiring, trying and taxing in every sense of the word.

The Making Of A Sweet Delight With Some Bitter Experiences

Prior to Fizlee’s current success in the food and beverage industry, she owned a dive company in Semporna, Sabah. She immersed in her love for the underwater world, but on a fateful day, she met a life-changing accident affecting her ear drums. The unfortunate event meant that Fizlee would have to divorce her love for the ocean forever. After years of dedicating her life to diving and planting corals in the beautiful Semporna waters, she inevitably had to part ways and find another career that could pay her bills.

Life as I knew it had changed. And I refused to accept it. When I had gotten out of the hospital and went back to my diving centre, I found that it had been robbed. My heart shattered. – Fizlee Hafiz

The robbery left Fizlee penniless. With nothing left for her in Sabah, she flew back to Kuala Lumpur.

I refused to stay down. I needed to do something. I believed in myself and constantly pushed myself. I knew I was going to make it somehow.

The time spent in Sabah had exposed Fizlee to a local delicacy that was not common in West Malaysia – it was pisang goreng cheese, deep fried banana fritters drizzled with creamy rich cheese on top.

A post shared by PISANG CHEESE PILIHAN NO 1 (@kakpthepisangcheese)

She decided that this dish would be the perfect snack and West Malaysians would love it as much as Sabahans. All she had to do was to make it available to customers in Kuala Lumpur and the sales would speak for itself.

Remember when I had come back to Peninsular, I had no money whatsoever. I had a bunch of bananas and I borrowed a kuali from my mother and started my business just like that.

From Bus Driver to Perfume Queen

Ernayanee Nur Julaimi is also no stranger to these hardships. Today, at the sound of her name, she is best known for De’Xandra, Malaysia’s top fragrance producer with a delicate range of high quality inspired perfumes. With her current success and wealth, it is hard to imagine that there was a time where this perfume queen was so broke she needed to cut a packet of maggi noodles in half to make it two separate meals.

When I had first started getting involved in the business world I had Zero-Knowledge. Zero-Experience. No one to rely on. I just wanted to succeed. It was important to me that I proved my dreams would become my reality. – Ernayanee Nur Julaimi

Despite her constant efforts, she was met with constant failure.

Those first three years were the hardest times I have ever experienced. I pretended to be fine when I wasn’t. To keep myself in check, I kept a diary. I wanted to see where I was going wrong. I needed to know what I needed to change. The diary helped me to prioritize.

Ernayanee did everything to make ends meet. From working as a bus driver to a cleaner. She earned as little as RM60 a day, collecting RM1 notes. When she was ready to return to the world of business, she borrowed money from her little sister’s PTPTN to buy a bunch of brooches so she could sell it to make some money.

She remembers spending hours selling brooches to UITM students. She was determined to make back the money she spent on it. Ernayanee committed to walking up and down eight flights of stairs to ensure that she sold every single piece. This episode taught her that anything is possible if she set her mind to it.

From brooches, she ventured into perfume selling. Before long, De’Xandra was established. This local high quality inspired fragrance reached RM7 Million in sales during its first year of launching and is being sold in five countries, including Hong Kong. The company aims to enter China’s market soon and aims to be a key player dominating the Asian market.

Looking at these women’s successes, it is almost impossible to imagine that they struggled financially. Their resilience, determination and “can do” mindset sets them apart. Their stories are a true inspiration and hope to anyone who is currently facing similar burdens.

When asked about how they were able to get themselves out of the rut, their answers were quite similar.

There are two types of people in life. The first being those who only see the problems. The second are those that only see opportunities. Every opportunity needs to be embraced. The more we fail, the better chance we have to learn and succeed. – Ernayanee Nur Julaimi

We hope that you’ve been inspired by these stories and know that you’re never alone in your struggles. You may also want to check out this article on other ways and ideas to equip, empower and educate yourself so that you’re in a better position to seize other opportunities in the future.