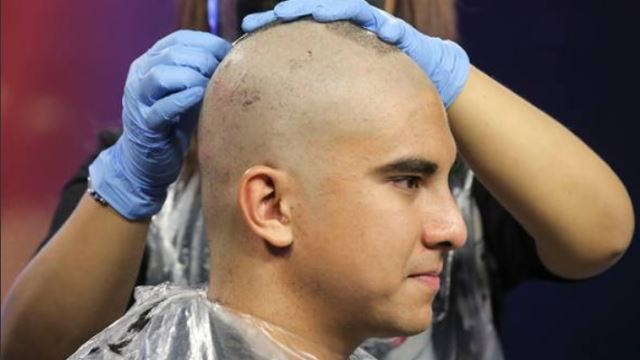 I couldn’t keep up with online classes.

It was difficult to do my assignments on an online platform.

I had to take my exam on my phone and pray that the internet didn’t disconnect.

These are just a few of the problems faced by students coping with E-learning since early last year. Although the movement to shift all education to an online platform was done to protect the people, not everyone was equipped for the sudden change. As a matter of fact, many were left to rely on their mobile phones to attend classes, get assignments done and even sit for exams[1].

Noticing the struggles of the students, the Malaysian politician and former Minister for Youth and Sports, Syed Saddiq offered to adopt a new hairstyle on the line to raise funds for less fortunate students in Muar, under his fundraiser programme named “One Family, One Laptop”. This quickly became a hot topic and was more commonly referred to as the #BotakChallenge.

Prior to its sudden social media fame, the “One Family, One Laptop” initiative had been ongoing throughout 2020 where the Muar MP cycled throughout the district providing laptops for university students from families earning RM1500 and below. The public was kept abreast with the progress of the initiative through various social media platforms. With the ultimate goal of providing five hundred B40 families with laptops, a total of 75 families had been assisted as of late September[2].

In order to boost the initiative, the young MP aimed to raise RM200,000 for 100 laptops. The former youth minister did not have any government allocation for the initiative, so he turned to the public. Syed Saddiq declared on December 26 that he will be participating in the #BotakChallenge, shaving his head if the target is hit within five days. The high budget was to ensure the laptops were of high quality and were able to keep up with the demands of E-Learning, with Acer Chromebook i5 being the selected model. Hearing the call for action to assist the poor youth of Muar, Malaysians answered in the masses[3].

When interviewed, several recipients of the initiative expressed how grateful they were to receive such high-quality laptops. The students of Muar had come from so many different fields of expertise and had previously struggled to keep up with E-learning.

Muhammad Syafiq Bin Haron, 18, taking the “Sijil Tinggi Agama Malaysia” had applied for financial aid previously but was rejected. Muhammad Syafiq was attending all of his online classes and completing his assignment through his phone. Thankfully, this initiative was able to ease his burden[5].

Other recipients of the initiative were in the midst of saving up money to buy their own laptops, but are now able to channel the funds into other necessities. Danish Haiqal Shajehan, 17, an SPM student went viral when he posted beautiful study notes done on his phone on social media. Danish has been selling clothes on Instagram to save money for an iPad. His work caught MP Syed Saddiq’s attention, and he was given an iPad[6]. All those who received aid agreed that the initiative was very helpful and hoped for it to be continued to help the youths of the B40 community.

There is no doubt that the “One Family, One Laptop” initiative has helped ease E-learning struggles for the students of Muar, Johor. However, it is no secret that others are in need of the same assistance.

Standard Of Living In Muar Is Relatively High: Take A Look

Looking at it from an economic point of view, the mean monthly household gross income of the district of Muar, 2019, is among the highest, being RM7,540, with the state average being RM8,013. Expenditure wise, Muar district recorded its mean monthly household consumption expenditure of RM4,908 is higher that Johor’s level at RM4,793. Despite a relatively high mean household income, the cost of living in Muar is also fairly high. For the B40s living in Muar, the day-to-day expenses can be a stretch[7].

According to the latest update by the Minister the total number of families that were assisted increased to 157 as of January 5. Although there is still a long way to go, Muar’s MP is working hard to help the low-income families of Muar. Here’s hoping that this new year, other states will follow suit.

Faces Of Fighters: Breast Cancer And Its Costly Toll On Patients
The Flooding Of Malaysia’s Rice Bowl - Sea Level Rise And Its Repercussions On Kedah’s Rice Farmers 
Faiz Qayyuum: Ex-Troubled Teen Turned Activist Helping The Marginalised
Explore These 9 Meaningful and Unique Community-based Experiences Around Malaysia 
6 Sports Stars Making A Social Impact In Malaysia
Deaf Artist, Lim Anuar Shares His Voice Through Paintings
Water Woes in Kelantan: What’s the Real Issue? 
Cancer Survivor, Zuraini Kamal Sets Up An NGO To Help Low-Income Patients
Essential Information To Be Prepared For The Impending Monsoon Season
6 Amazing Chefs With A Humbling Backstory That Will Inspire You