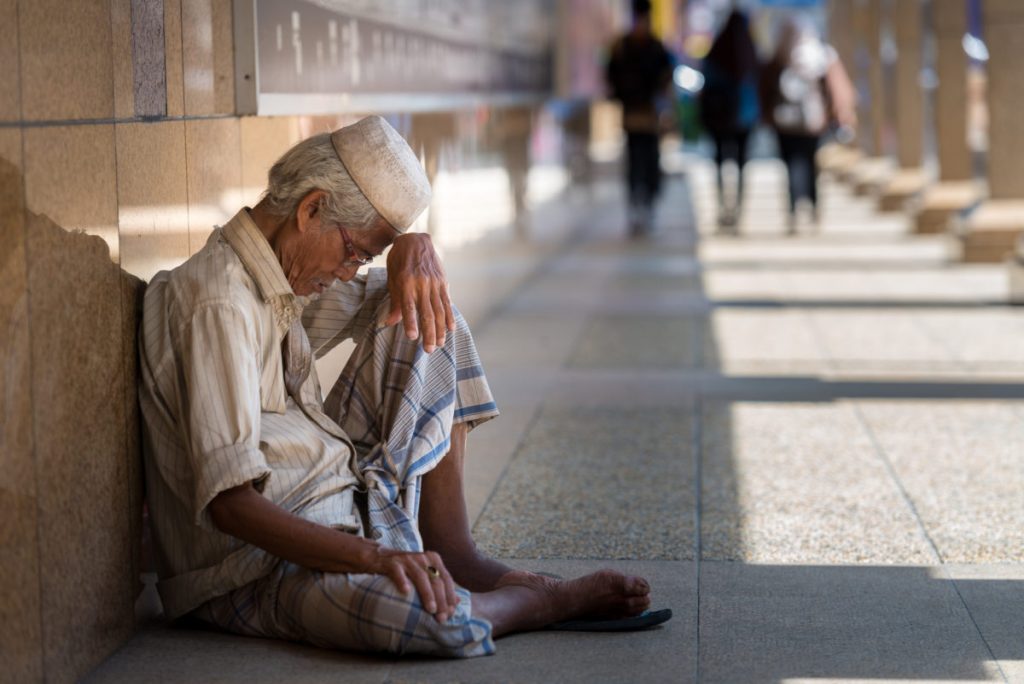 Homelessness is an emotive word that conjures up images of people sleeping on the sidewalk, scavenging for food, smelly and scruffy or the drunk, dangerous, and dirty. Apart from these common negative stereotypes, there is really no clear understanding of who a homeless person is or what constitutes homelessness.

We have all seen at least one homeless person, whether sitting in a busy market begging for spare change, sleeping on five foot ways or knocking on windows to ask for money. The sight of them may trigger some emotions, but the minute we pass them, they are out of sight, out of mind.

In Malaysia, or at least in Kuala Lumpur, homeless people have somewhat blended into the backdrop of the city. The less noise they make, the less aware we are of them. Recently however, homelessness caught the eye of authorities and NGOs.

In order to manage this situation, the Malaysian government relies on the Destitute Persons Act 1977. According to this act, anyone who is homeless can be taken into custody and transferred to relevant welfare institutions by authorities[3].

However, according to the Borgen Project, only a minority of the homeless detained are successfully transferred into welfare centres. Most of them are detained and released back into the streets without any further help[1]. The limitations of relying on an Act without additional interventions do not address the root issues of homelessness.

In order to keep people off the streets, the homeless population needs to be heard (to understand what kind of support and help they actually need) and cared for (to be treated like humans and not feel attacked and stigmatised because of their situation).

More Homeless On The Streets

In 2010, the Social Welfare Department conducted a survey on the street-dwelling homeless people in Kuala Lumpur and found that 1,387 individuals were experiencing homelessness at that point in time[3].

In 2014, this population was estimated at only 600 people on the streets however, in 2016, Dewan Bandaraya Kuala Lumpur reported that the number of homeless persons had tripled.

The latest data on the homeless population in Malaysia is not found, but it can be assumed that the numbers have increased due to the pandemic. The scarcity of studies done on the homeless population is obvious. Even the Department of Statistics Malaysia expressed difficulty in accounting for the number of homeless persons via a census in 2010[5] – a possible factor for the lack of data.

Why Are People Homeless?

Individuals don’t just end up on the streets like that. Homelessness is a symptom of an array of social issues. It has been identified that the leading causes for homelessness are unemployment, poverty, old age and abandonment, substance abuse, mental and chronic illness and the lack of affordable housing[3].

A Penang Institute study found that unemployment, low-income and old age without a living family were the top three causes of homelessness – making up 75% of all respondents[3]. Yet, in a different study by the University of Malaya, they found that debt, chronic illness and unemployment were the greatest factors leading to homelessness[6].

The results from both studies show the complexities of the problem however it does highlight that unemployment is a constant factor that keeps people on the streets. Without a job and no income, those who lack support and are impaired with illness or other disadvantages are forced to survive. Sadly some end up on the streets.

Despite the current minimum wage of RM1,200[7], some people are still paid below the minimum wage. Many workers are forced to work for less, not to mention informal sectors that offer part-time careers pay as little as RM5 per hour.

The Relentless Cycle of Homelessness And Unemployment

Homeless individuals find it hard to secure a formal job as most employers require a permanent address for application. Employers do not acknowledge them as ideal candidates as there may be an immediate lack of trust and credibility towards the applicant. Additionally, homeless individuals have to fend off negative perceptions and stigmas put on them in order to be on a level playing field with other job applicants[4].

The challenges of securing a job and keeping it is weighty. Other factors such as the lack of education, persistent poverty and the lack of support adds weight to the struggle.

Over time, this may lead to mental health issues and acts of desperation such as theft and involvement in drugs[6]. One problem leads to another and before long, a homeless individual may find themselves trapped in a vicious and problematic issue.

Despite the common mindset that all homeless people are lazy and problematic members of the community, they remain as society’s most vulnerable groups. Many are victims of circumstances and their desperation is subject to exploitation. Those that are not exploited, are forgotten, which is also dangerous especially in a global pandemic.

How Can You Help The Homeless?

There is an obvious gap in data and information on the homeless population in Malaysia. Seeking the facts and accurate data will help changemakers craft better and more effective solutions to keeping people off the streets.

The issue of homelessless, like other social issues, requires a multi-stakeholder, long-term approach from both public and private entities. Rehabilitation, job opportunities and more low-cost housing options are some possible ways forward.

But what if you’re an individual reading this and want to do something to help? A great way to start would be identify the homeless in your area. Go the extra mile and give them a Care Pack. Restore their dignity and value by leaving a note to let them know that they are seen, heard and they matter.

Some suggestions for items in the Care Pack include: ready-to-eat food or meals, water, toiletries, sanitary items (if given to a woman), tshirt, towel, socks, pillow and notes.

Sustained your efforts by volunteering for a local NGO. Connect with them and have an open dialogue to help understand the problem at the grassroots level. Offer your time and expertise to support their work. Here’s a list of changemakers you can get in touch with: