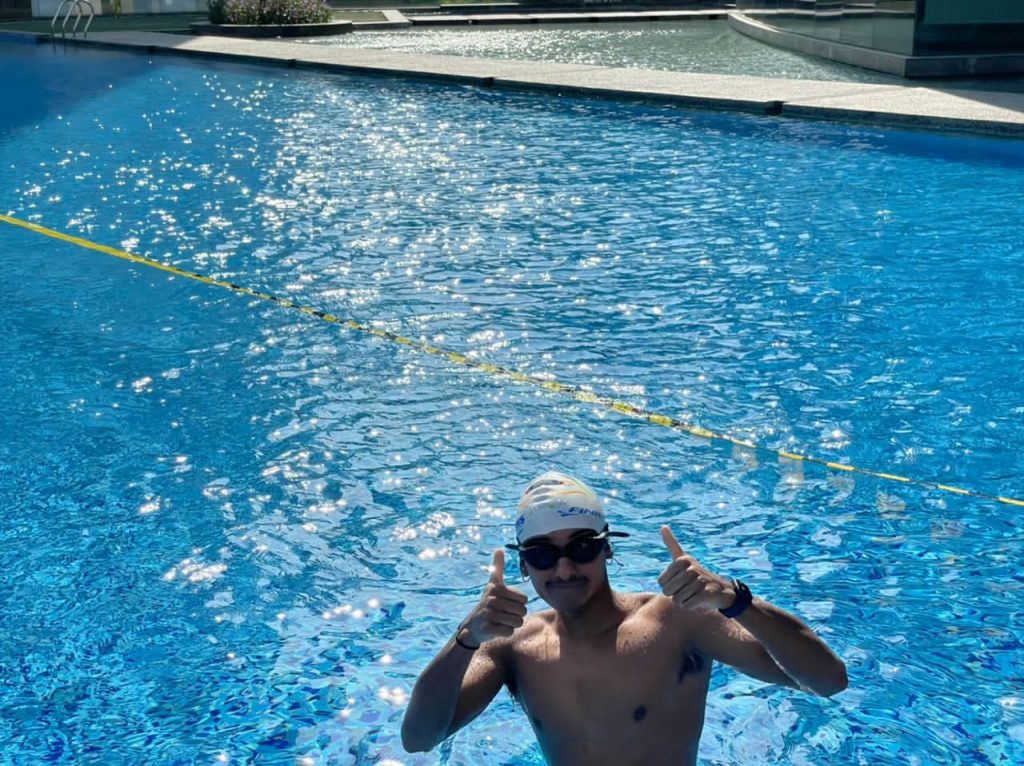 Meet Harish Dhakshinamoorthy, a 21-year old youth from Segambut with a passion for swimming and mentoring. This lad swam for 12 hours to raise over RM39,000 for a cause that’s close to his heart. Here’s his story:

Harish’s first exposure to social and community development work was during a trip to Cambodia and working with an organisation after high school where he helped teach students English and Mathematics. Since then, Harish has actively committed time to mentoring students in Australia and Malaysia.

In the past couple of years, I have tutored and guided over 50 rural, indigenous, and accelerated students in Australia and Malaysia and have gained a sincere appreciation for mentorship and its ability to grow and unlock incredible opportunities for people.

Having seen the potential of mentorship in helping students learn, Harish was drawn to Rakan Tutor, an NGO working to curb learning loss and their approach of accelerated learning via one-on-one tutoring with underserved students. He was also acutely aware that the pandemic has set a lot of students back, especially those sitting for major exams and about to enter tertiary studies.

The intersection of my value of mentorship and the current state of Malaysia inspired me to work closely with Rakan Tutor to generate a fundraiser that would ultimately provide the firepower to sustain, and expand the range of impact for the students in Malaysia that have been left behind.

Knowing that Rakan Tutor is a fairly new organisation, Harish wanted to contribute in a way that will make the organisation go further and longer.

The idea of a fundraiser was inspired by two recent wins – his graduation with a Bachelor of Biomedicine from the University of Melbourne and his upcoming birthday. To make the celebrations more meaningful, he decided on a fundraiser.

Then Harish thought about what he could do to raise funds and he was immediately reminded of something he had not been doing much of and missed – swimming!

The fundraising idea was a combo of three things: Teaching which I have been doing a lot, Rakan Tutor the beneficiary and then there was swimming. Because of the pandemic, I haven’t had the opportunity to do long-distance swimming that much.

From sunrise to sunset

Harish is an experienced swimmer, partaking in Open Water Swimming Competitions with his father in the past. Initially, he had planned to swim for 24 hours. After considering the logistics, nutritional needs and training required, the duration was cut to a reasonable 12 hours. The 12 hours swim-a-thon is a huge undertaking as compared to his previous record of 4km in Malaysian Open Water Swimming.

I wanted to push myself further than before, and ideally far enough to find my limit.

On the morning of the event, despite a restless night, he woke up ready to go. He was prepared mentally and physically and was pumped to get into the pool.

At that moment, I certainly felt ready mentally. Physically, I have never done anything to that extreme and I just had to have trust that my body will keep up and stay connected to my mind, throughout.

Once he jumped into the pool, and his swimming strokes were steady, the crowd started to gather and he felt energised by the presence of his extended social support.

As more family and neighbours came down to support, I felt this aura of energy outside me just tapping into my own reserves which kept me going further.

One notable figure that remained steadfast was his grandmother. After 3 hours of non-stop vigorous swimming, he took a break to refuel and fatigue kicked in. But, it was her motivation that encouraged him to jump back into the pool for more laps.

Harish, you need to get back in there. Like, you’re gonna feel this [fatigue] of course, but once you start swimming again, then, you will feel, you know, the rhythm again. And, you’ll not get stuck in the wrong rhythm. – Harish’s grandma

It was at the middle mark of the swim-a-thon when Harish hit a wall again and he had to challenge his thoughts and not surrender to fatigue. Beyond on-site visitors, a virtual community was cheering him on.

People tuned in and watched Harish swim for 12 hours, it wasn’t actually the swimming though, we realised – it was Harish’s incredible resilience and selflessness that engaged the audience. – Samantha Lee, Rakan Tutor, Marketing Wizard

Reaching the final moments of his swim-a-thon, his neighbours, Yang Berhormat Hannah Yeoh and her husband, Ramanchandran Muniandy, together with his family members were there at the finishing line.

Towards the end, I was very aware and conscious that there are a lot of people that are going to celebrate and support me and see me finish this swim. So, I was really excited by the fact that this had gathered that much support.

Once he came out of the water, a sense of fulfilment like no other washed over him and dissipated the exhaustion. He also came to the realisation that anything is possible and making a difference is not rocket science.

I feel like making a difference, doesn’t have to be so big and it is possible. We can all do it – use our own privileges and strengths, you know – in my case maybe it was my ability to swim that actually impacted the world in a really good way.

Splash that created a ripple effect

Harish managed to swim 21.2 km in 12 hours and it exceeded his expectations based on his previous records. Driven by his success, his future goals include swimming the seas surrounding Pulau Perhentian for 16km and 19.7km swim to Rottnest Island in Perth.

At the planning stage, Rakan Tutor had hoped that this fundraising campaign would reach at least RM10,000.  However, within two hours of the swim-a-thon, the milestone had overshot the RM10,000 mark and by the end of the swimming feat, donors had pledged more than RM39,000 to Rakan Tutor. Harish himself, who completed 530 laps, also contributed by pledging RM10 for each lap.

Harish has proven that there is room for anyone to make a difference depending on each one’s individual strength and interest. The fundraiser was also a testament of how generous Malaysians are and together, we encourage those doing good work to go further.

You don’t have to be part of a gigantic effort to raise funds for a cause – anyone and everyone in their own capacity can contribute and Harish was truly a show of that. Samantha Lee, Rakan Tutor, Marketing Wizard

Although the swim-a-thon is done, Harish is not finished with his good work yet. He is currently volunteering as a tutor in Rakan Tutor to fortify SPM candidates’ grasp on Mathematics.

Find out the impacts of the pandemic on students in Malaysia and what learning loss is and get to know more about Rakan Tutor.

Special thanks: All photos published in this article are from Harish’s personal collection.