Habitats Of The Urban Poor In Malaysia: Part II (The Real Living Conditions) 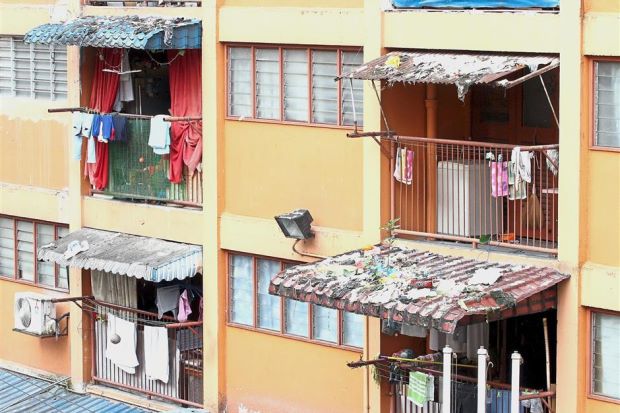 Read Part I of Habitats Of The Urban Poor In Malaysia and find out what urbanisation means and how it has impacted the poor living in urban areas.

Poor Living Conditions And Its Consequences

The first thing that comes to mind, is that most urban poor live in unsanitary places. While this is not untrue, it is important to note that this includes those living on the streets, in the slums, and public housing projects hosted by the government and private organisations. These conditions are not specific to just the homeless, but for any household living in poverty (B40 group).

Due to expensive housing, the urban poor are forced to live in affordable housing units that may have inconveniences and other risks associated with safe and healthy living.

Substandard housing is defined as overcrowded and poorly built houses that lack one or more of the following conditions[1]:

Unfortunately, these ‘affordable’ housing units are usually congested, unregulated, overcrowded, near open sewers, and even built-in geographically dangerous areas like riverbanks, and hillsides. These locations are bad because it exposes them to natural disasters such as flooding and landslides[2].

As a majority of these homes are in unsanitary areas or in bad condition, this opens up a whole host of health problems. Open sewers and stagnant water expose the residents to unhealthy waste[2].

Infectious diseases could be carried by animals and pests, not to mention human-to-human transmission. The diseases that are common in urban settings include malaria, cholera, tuberculosis, as well as dengue among others[2].

Poor construction on the other hand could lead to what is known as the sick building syndrome.

This is the result of the building and finishing materials that are used. Poor ventilation due to bad design is also another cause. This can easily be identified through the lack of windows or air wells, low ceilings, and close proximities with other nearby buildings. Sadly, these characteristics are common in low-cost housings around the world[2].

Housings with poor sanitation, plumbing or even poor construction lead to residents falling ill to respiratory illnesses, intestinal parasites, and cardiovascular diseases[2]. All these can be transmitted to other residents of the same housing area.

Most low-cost housing units have only two bedrooms per unit. Yet, most Malaysian families have five members in their households. Having more than two people occupy one room in a household qualifies as overcrowding. A study has found this to be the most cited indicator when describing the housing condition of the urban poor. The lack of space also gives rise to issues related to comfort and privacy[3].

Studies have found that the housing condition and overcrowding directly affects the development of children in terms of education, health, behaviour and safety.

Another study carried out over the span of seven years also revealed that overcrowding in early life for children can be linked to health problems such as stomach cancer, respiratory problems, and infectious diseases[3].

The surrounding environment plays a part in a healthy living condition. The urban poor mostly resides in places with limited space and no recreational areas.

For example, playgrounds and parks can be enjoyed by the community. A study found that a high percentage of low-income women in Peninsular Malaysia were unsatisfied with their housing quality compared to their rural counterpart[3]. This can be directly attributed to the lack of space available to them and their family.

How do we solve the problem?

The most obvious plan would be to engage in better construction policies that allow for better housing conditions. However, it is revealed that the state of living for urban poor could be related to the state of the economy and urbanisation. Aside from improving the socio-economic situation of the urban poor, there is a need to address the problem of rural depopulation and sudden urbanisation of cities.

As more people move into cities in search of work, this causes rural depopulation, leading to a drop in the rural labour force. This in turn affects the food supply chain both locally and globally as there is not enough workforce.

Although there is no clear and straightforward solution to this in the short term, we can definitely agree that more consideration can be made for rural development to slow the migration and for better urban planning measures to improve the basic living conditions of the urban poor.