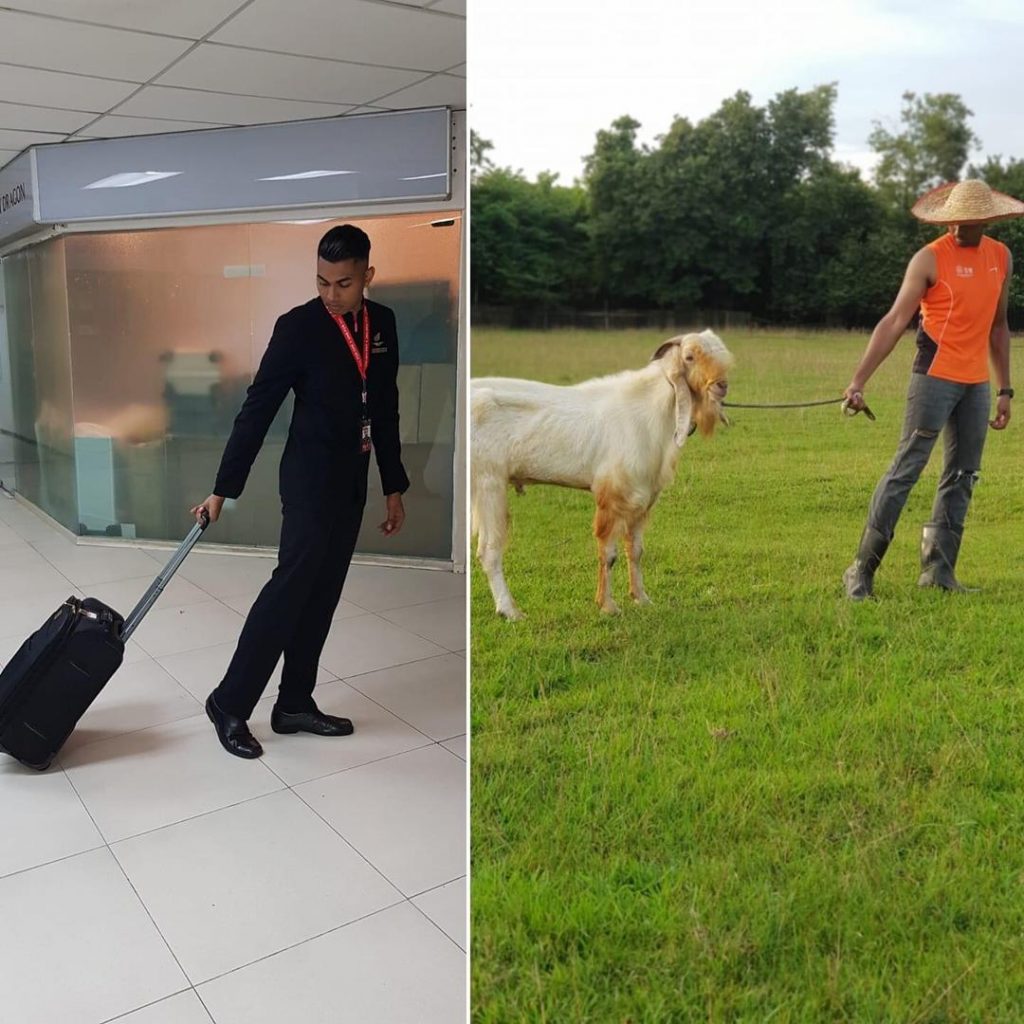 Globally, jobs in the airline industry saw a 43% reduction compared to pre-Covid times. This amounts to an estimated 4.8 million people losing their jobs[1]. Planes have been grounded, pilots, cabin crew and ground staff had to be furloughed or laid off and businesses related to aviation suffered tremendous losses.

Amidst the difficulties that come with a pandemic, the resilience of society is uncovered. Remarkable individuals have risen to the challenge and made drastic changes to not only survive, but thrive. One such individual is former Air Asia senior cabin crew, Mohd Fazrul bin Zainal Arbidin who transitioned from a career in the air to becoming a goat-father.

Fazrul considers himself an ambassador of the airline and enjoys meeting new people everyday.

“I love being in the air and enjoy serving people. It is something I am very proud of.”

After working for Air Asia for six and a half years, the 36 year old Penang-nite was retrenched in November 2020. Devastated by the news, he was saddened not just by the fact that he lost his job but he also never had a chance to say goodbye to his colleagues and friends – many of them are dear to him.

After receiving the retrenchment letter, he experienced mild depression for two weeks where he found himself shutting down.

“It was difficult to come to terms with not being able to do what I love and not knowing when I will be able to fly again. When you love something so much and it’s taken away from you so suddenly, it’s really hard to comprehend.’

A Start To Something New

After having days of sleepless nights, he told his friends and family members that he should not wallow in self pity, but instead to pick himself up.

Fazrul decided to reskill himself and take on the business as a livestock trader. He buys, sells and breed livestocks such as goat, cow, chicken, turkey and duck and delivers them all over Penang. His customers include individuals (for kenduri or festive season), hotels and restaurants.

When the lockdown restrictions tightened, Fazrul lost businesses from hotels and restaurants and had to pivot quickly. He rented a small piece of land  to breed selected high quality pure-breed livestock. From this selection, a number of produce was generated such as fresh milk and meat cuts suitable for regular households.

His service expanded to include the masses and now he delivers orders to homes instead of just businesses. Fazrul personally delivers the orders and most days he is up early, knocking on doors and delivering fresh produce to his customers on his motorbike.

Previously as a cabin crew, he was able to support his parents but now, he is unable to do so although that is a goal he intends to achieve in the near future.

“I want to give money to my parents, as a good son should. But they see my struggles and refuse it. I want to get to a place where I can take care of them again”

In order to keep things tight, he does everything on his own. He rented a small farm on the outskirts and relies on government support. Recently, he received a grant from the Ministry of Agriculture under the Agropreneur Muda scheme to enable him to do so. To promote his business, he leveraged on the power of social media and manages his Facebook and Instagram account on his own.

Airline Skills Not Gone To Waste

The skills and values he picked up while being a senior cabin crew did not go to waste. The way he treats and engages with his customers is attributed to the training he got in the air. Patience is of utmost importance.

“In the air, I meet new people every day and have to deal with all kinds of people in all kinds of situations. Today, when I meet difficult customers, I do not get stressed and deal with the situation with great deal of patience.”

The airline industry has very strict Standard Operating Procedures (SOPs) and this is to the benefit of Fazrul. As a livestock trader, he took on the same value of meticulous scrutiny to ensure that his business and the animals are well taken care of. Protocols such as getting the business registration and permits, ensuring the animals receive the right medication and storage requirements for the produce as just some examples.

The Desire To Fly Again

Although the current and future circumstances seem bleak, Fazrul dreams of flying again.

“If given the chance, I would love to fly again – just ask any cabin crew. I miss the sky. I miss being up there. But for now I want to focus on my business.”

The story of this young man is one of courage, resilience and never giving up. Nothing is ever impossible if we set our heart to it.

“Believe in yourself. Get out of your comfort zone. Be yourself. If you find yourself struggling, talk to someone – be it a family member or friend. It does get better.”