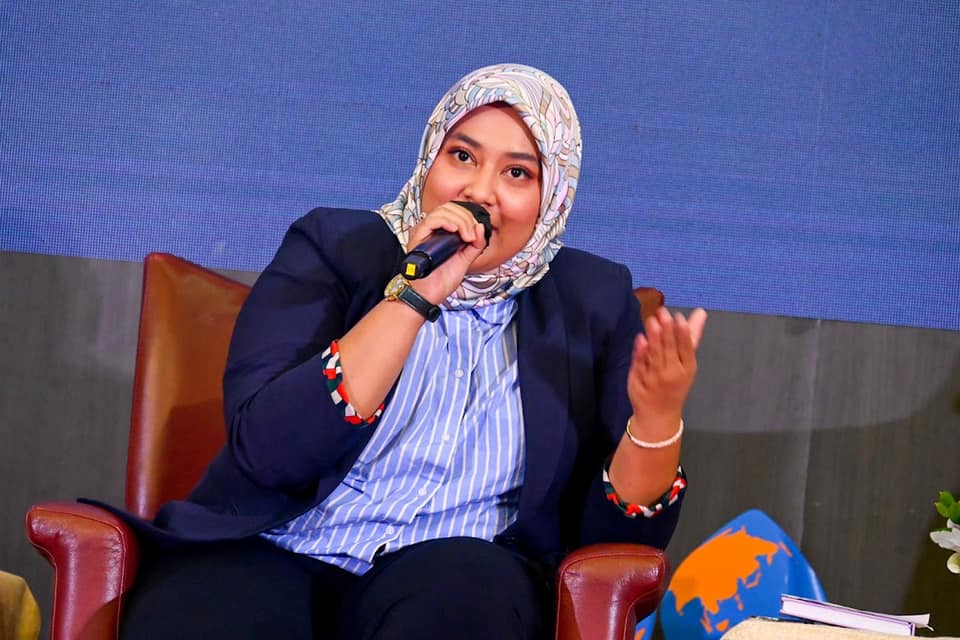 An hour’s drive away from Kuala Lumpur southbound, we will arrive at the state of Negeri Sembilan. Despite its proximity to Klang Valley, the state lags when it comes to household income in 2019.

We feel very uncomfortable as Negeri Sembilan is not far from the Klang Valley and has a household income of RM5,055 which is below the national average of RM5,873. – Datuk Dr Mohamad Rafie Ab Malek, State Investment, Industrial, Entrepreneurship, Education and Human Capital Action Committee chairman[1]

Many have sought jobs in neighbouring states either through daily commuting or migrating to Selangor, Klang Valley. Those who stayed in the state settled in the capital city, Seremban. A sentiment Dinie Fadil, who grew up in Negeri Sembilan, found to be shameful.

It’s a shame because Negeri Sembilan actually has untapped potential. We have women and youth here but we lack economic activities. – Dinie Fadil, founder of Tokey

Dinie’s interest in social activism and social entrepreneurship derives from her involvement during her university days. Armed with an International Relations degree from the University of Essex, Dinie co-founded Pertubuhan Generasi Aspirasi Pemimpin Wanita Malaysia (GAPMY), an NGO she established with the former parliament speaker, Dato’ Sri Azalina Othman Said, Puan Sri Bibi Sharliza and others, to help women unleash their potential in leadership, especially survivors of abuse.

But Dinie understood advocacy and aid alone weren’t enough to empower women; there needs to be a sustainable method that gives the reign of control to women.

During her five years in the UK, Dinie witnessed the strong presence social enterprise has and how most businesses have implemented social business models, a change that Malaysia has yet to see.

Combining her interest in women empowerment as well as tackling the rapid migration of youth from Negeri Sembilan, Tokey, a social enterprise came into the picture.

Smaller Slice Of The Pie

Currently, in Malaysia, there are more than 20,000 established social enterprises[2]. However, the reality is that 64% of social enterprises are based in Klang Valley[2]. Residing in Negeri Sembilan, Dinie saw how social enterprise and NGOs in the state are similar to finding a needle in the haystack.

There is an issue of saturation when it comes to social enterprises. The focus is quite heavy on Klang Valley. The youth in Negeri Sembilan rarely get the opportunities and the same information Klang Valley youths do, and that only motivates me to establish Tokey here. – Dinie Fadil, founder of Tokey

In some parts of Negeri Sembilan, the adat perpatih that emphasises matriarchal society did not permeate the opportunities women are provided in the state. Dinie had witnessed women having been silenced, and lacked autonomy.

We have plenty of women and youth in Negeri Sembilan driven to create changes, transform and want to run their businesses. But they don’t have enough opportunities. They need to go to work in KL and Klang valley. – Dinie Fadil, founder of Tokey

However, doing good has been part and parcel of her family members. In the past, her late great grandfather Dato’ Haji Yusuf Lakhan played a crucial role in employing youths and women in Kuala Pilah. A mission that Dinie and her team are currently attempting to emulate.

My late great grandfather, Dato’ Haji Yusuf Lakhan, was a businessman. He sold shoes and empowered youth through his rubber factory in Jalan Pantai. So, most of the people working with him were youths and women.– Dinie Fadil, founder of Tokey

In championing gender equality and women empowerment, it doesn’t suffice to only involve women. We need youth, regardless of gender to become our allies. An ally that understands what work does for women and we hope to change their world views through Tokey.– Dinie Fadil, founder of Tokey

Tokey is arguably the first and only known social enterprise in Negeri Sembilan. Their work began in 2020, and despite the raging pandemic, Tokey travelled to different districts in Negeri Sembilan to understand the needs and wants of youths and women. The Tokey Connect initiative sees Dinie and her team sitting with villagers in rural Negeri Sembilan.

What I have learnt when communicating with people in Negeri Sembilan is we have to approach the locals, [and] use their local representatives as a bridge. Talk to their ketua kampung, they’ll be happy to help us because they know the community best. – Dinie Fadil, founder of Tokey

The turnout may have been small, especially in some villages where there are only 10 youths to speak to. But, to Dinie, it was a start.

Through Tokey’s dialogue with the locals, she understood that much more needs to be done in order to provide employment and how information does not trickle down to the most vulnerable in the community.

In Kg Parit, the local representatives shared that only 10 women and youth remained in the village. The rest have left to work in Seremban. It’s solid proof that we have to do something about it. – Dinie Fadil, founder of Tokey

Through Tokey’s on-the-ground findings, Dinie is only fuelled to get the next phase of Tokey running.

We gathered interested B40 youth and women.  We shared with them what our organisation is all about. Those who were interested joined us for a six months programme, and we provided them with different workshops on running the business. – Dinie Fadil, founder of Tokey

Eight showed interest in establishing a business, their participation allowing Tokey to provide personalised and attentive care to each of the newly-born enterprises. Tokey then invested RM500 to each Tokeypreneur, a term Tokey referred to their beneficiaries as, to kick start their business, and guided them through the process.

Tokey supported eight beneficiaries by ensuring they were registered under Suruhanjaya Syarikat Malaysia and pushed them to get Halal certifications. All of them are running an F&B business, so we made sure that they received typhoid jabs. – Dinie Fadil, founder of Tokey

Success Is On The Horizon

The eight Tokeyentrepreneurs focused on F&B enterprises ranging from traditional kuih-muih to savoury pastries. All are women from B40 households within the age range of 18 to 30 years old.

Some have bloomed more than the rest.

For example, Mr GnA, a Tokeypreneur selling nasi kandar, started with a food truck. But now, it is running from a central kitchen in Lavender Heights, Senawang.

Mr GnA started with zero customers and social media presence. A year later, they are getting steady catering tenders. They once earned more than RM 5000 in a week. – Dinie Fadil, founder of Tokey

Another Tokeypreneur, Ladychef.my, specialises in Western food and is run by a mother to two children. She has shown tremendous growth since starting with Tokey. Ladychef has received large corporate orders and a steady stream of regular customers.

Once, Ladychef.my received a corporate initiative for 200 orders. She was really shocked, it was out of her imagination. But, these are small victories and Tokey is grateful for customers who want to support our work. – Dinie Fadil, founder of Tokey

Shafiq [Solomak’s general manager] was initially clueless about what a social enterprise is. He was also lacking in confidence. But, we left him in charge at Solomak Yellow By Tokey. We saw him talking to the customers, explaining to them what social enterprise is and simply running the show. – Dinie Fadil, founder of Tokey

Solomak Yellow’s stride however was short-lived. The team decided to close the cafe due to a recent rental hike.

However, Dinie and Tokey aren’t too dismayed by the closure of the community cafe, seeing it as a bump on the road. In return, Dinie has seen how Along has grown and bravely ventures into uncharted territory.

I usually bring Shafiq or any other beneficiaries to networking events. In the past, Along, for example, shied away from talking to others or speaking in public. Now, he’d seen me doing it often and he’s confident enough to do so. – Dinie Fadil, founder of Tokey

The formidable woman, however, knows no stopping. Dinie is on the lookout to establish Solomak in a new location. Until then, Solomak would be operating through food trucks and catering orders. Tokey will continue to make its presence known by participating in local bazaars and the marketplace. Tokey is also keen to build a website or mobile application named Tokey All-in to help promote Tokeypreneurs products.

A Year Of Learning

Dinie does not believe in making a quantitatively large impact. Rather, she focuses more on how her initiative has changed the lives and the households of her Tokeypreneurs.

I don’t believe in big numbers like 7000 or 8000. I believe in small numbers. That’s why Tokey’s direct impact is only 8 because I need to sit down with each of my beneficiaries and ask them what they need. – Dinie Fadil, founder of Tokey

Like many other social entrepreneurs, funding has been her constant struggle. The situation is more difficult, especially in Negeri Sembilan, where awareness of the importance of social enterprise and grant distribution has been sparse.

Even so, Dinie and Tokey are in for the long haul. Since Tokey’s presence is known, 200  volunteers came to assist during flash floods in Negeri Sembilan and during the #bendera putih initiative. Further proof that Tokey’s presence is necessary is exemplified by youth sending their CVs to her and also more wanting to be part of Tokeyprenuers.

When I saw that we were able to gather up to 200  volunteers during our #waghihbantuwaghih initiative. I realised that people in Negeri Sembilan are keen to participate in volunteering activities. Recently, I have also received CVs and people seeking Tokey’s help, the population here needs help and opportunities.– Dinie Fadil, founder of Tokey

It is a sight to behold with the growing reception Tokey is receiving. To keep the momentum going, Tokey Connect initiative is taking place in the coming months, approaching more rural women and youth. Dinie also hopes to collaborate with NGOs and governmental organisations to change the fate of youths in her hometown and eventually nationwide.

True to the motto she lives by, we rise by lifting others; Dinie is slowly lifting the youths and the marginalised women in Negeri Sembilan not just by providing economic means but also by the potential they have to grow.