Dato’ Lim Kok Cheong: From A Family Of Rubber Tappers To A Wealthy Millionaire Made Rich By Water 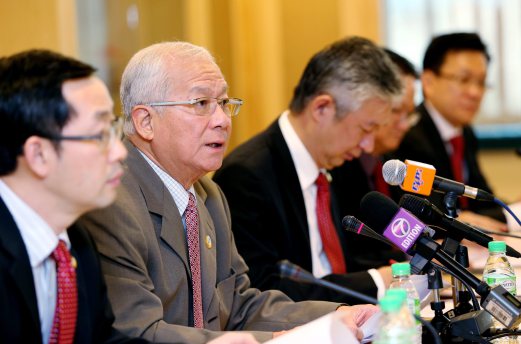 Lim Kok Cheong was born in 1945 amid uncertainties and at the height of the Second World War. Lim was born in Batam, Indonesia, but the worsening condition and work scarcity forced his parents to move back to Kuala Kangsar to earn an income as rubber tappers[1].

Once the war ended, food shortages were imminent, followed by communist insurgency in Malaya leading to the imposition of the state of emergency from 1948 to 1960. Lim’s family was once again uprooted and settled in Taiping, Perak. His parents took on the role of agents selling and distributing biscuits to support their livelihood[1].

Even through hardships, Lim continued with his education until he was 18. As Malaysia earned its independence in 1957, the young Lim left his hometown and ventured into Kuala Lumpur in the mid-1960s to find employment[1]. His first job was with a company selling edible oils. Lim was promoted to salesman from his initial role of delivering cooking oil in a van[1].

Lim shared sleeping quarters with his colleagues and slept on foldable canvas beds on the floor which they had to roll away every morning. But he wasn’t deterred, Lim had his eye on a bigger prize.

Lim worked long hours and saved his monthly earnings diligently. Once his savings reached RM5,000, he started a business with his friends and relatives. He founded the Yee Lee Company in 1968, a business that he was already familiar with – repacking edible oil.

There were around 20 people. I put 5,000 ringgit into the company. There were those who put in more. – Dato’ Lim Kok Cheong, non-executive chairman of Spritzer and Yee Lee Groups[1]

The Start Of Something New In The “City Of Millionaires”

His successful venture in the repacking edible oil business led him to build a palm oil refinery factory in Ipoh, in 1974. The capital of Perak, Ipoh, was coined as the ‘city of millionaires’ in the early 20th century. The city was producing more than half of the world’s tin by then and created its crop of successful entrepreneurs until the tin prices crashed.

Red Eagle (or known as Helang), the company’s cooking oil was launched a year later and till today, the brand of cooking oil is widely sold throughout Malaysia.

When the tin market collapsed in 1985, many of the self-made millionaires fled the city for other opportunities. But Lim Kok Cheong was left unscathed.

I was not in the mining industry so I was not much affected. – Dato’  Lim Kok Cheong, non-executive chairman of Spritzer and Yee Lee Groups[1]

From Oil To Water

It was also in the late 1980s that Lim Kok Cheong was struck with a novel idea. He noticed that the available bottled water in Malaysia such as Evian and Volvic were imported from overseas. In the early years of setting up the Spritzer company, the idea of making a local mineral water brand profitable was almost laughable.

Everyone laughed at me and told me that I was crazy. At that time, Malaysians mostly drank tap water. Even when you went to a restaurant, you would get served tap water. – Dato’ Lim Kok Cheong, non-executive chairman of Spritzer and Yee Lee Groups[1]

Nothing could break his spirit, Lim approached nightclub owners convincing them that mixing tap water and alcohol would hamper the quality of the drinks. The skills and experience he had as a salesman came in handy to build his customer base. To put Spritzer mineral water on the map required a hefty amount of money and marketing ploys.

It took three to four years to get sales going and we had to spend a lot of money on marketing. It started taking off in 1992 to 1993. – Dato’ Lim Kok Cheong, non-executive chairman of Spritzer and Yee Lee Groups[1]

Today, it is a well-known and trusted brand of mineral water in Malaysia earning recognition for its quality. In 2020, Spritzer received The Superior Taste Award 2020 by The International Taste and Quality Institute, Belgium. The brand has won its 19th consecutive Trusted Brand Platinum Award in 2020 reflecting the trust Malaysia has in the quality of its mineral water. It has also won the 6th consecutive Putra Brand Awards in 2020, one of the most prestigious consumer awards in Malaysia[2].

Starting with a small set up in Tupai Industrial Estate in 1989, and relocating to the present 330-acre facility in Taiping and a facility in Shah Alam and Yong Peng, the brand grew from strength to strength[3]. In 2017, Spritzer had a breakthrough in the global market through the launch of silica-rich ACILIS water[3].

Now, the Spritzer is being exported to Britain and the Netherlands and the company is setting its eye on the Chinese market in the foreseeable future[1].

Sustainability At The Core Of Spritzer’s Mission

Dato Lim served as the Group Managing Director for more than 30 years after growing the business into the largest bottled water produced in Malaysia. In 2015 he stepped down from his position and his eldest son, Lim Ee Young took up the mantle.

With a headcount of 837 employees and an annual production of three plants with over 750 million litres of bottled water, there is a priority and responsibility to be sustainable[2].

Spritzer is committed to its Environmental, Social and Corporate Governance (ESG) mission of holistic sustainability. The company goes to great lengths to ensure that the production of bottled water would not harm nature in any way.

Malaysia has been guilty of single-use plastic waste, mostly from food items. In 2019, the highest annual per capita plastic use was recorded at 16.78 kg per person[4]. The number has only increased during the series of pandemic lockdowns.

As the leading mineral water manufacturer, the amount of plastic waste derived from their packaging has been a particular concern that Spritzer addresses through its Corporate Social Responsibility. The company introduced the first-ever plant-based bottles using corn and unused sugar cane in 2019[2].

At the same time, the Spritzer Natural Mineral Water bottles labels are 100% recyclable starting from 2020. Ramping up their effort in environmental sustainability, the Spritzer plant installed solar panels, lowering at least 1,100 tonnes of carbon footprint in 2020[2].

In 2015, Spritzer Eco Park opened in Taiping, to educate Malaysians to become a better ally in preserving nature[5]. Spritzer also collaborated with non-governmental organisations in beach cleanups and coral replantation projects in Pulau Tioman to improve the ocean ecosystem[6].

At the community level, Spritzer is doing its part in education and awareness on good habits of recycling through the installation of its recycling machines and awareness programmes – Spritzer on Wheels[4]. During the flash flooding that hit Malaysia in 2021, the established mineral water provider took a step forward in distributing more than 50,000 potable bottles to affected victims nationwide, ensuring their access to clean drinking water[7,8].

Driver Of His Own Destiny

Dato’ Lim Kok Cheong has rarely been in the limelight with sparse media snippets of his nitty-gritty journey in breaking the poverty cycle. With grandparents who travelled from Fujian in cargo ships to his parents who were rubber tappers in the early days, the cards were stacked against him traditionally.

But, with his sheer willpower, he created a formidable enterprise that distributed palm oil for the use of household kitchens and bottled mineral water that lasted in the market for more than three decades. Lim, who used to deliver oil in his early days, was elected to lead the Associated Chinese Chambers of Commerce and Industry of Malaysia (ACCCIM), an influential trade association with over 100,000 members in 2002[1].

His silent toil in building a well-known empire is a story of a man who steers his path.