Could Toxic Masculinity Be The Undercurrent Behind Social Ills? 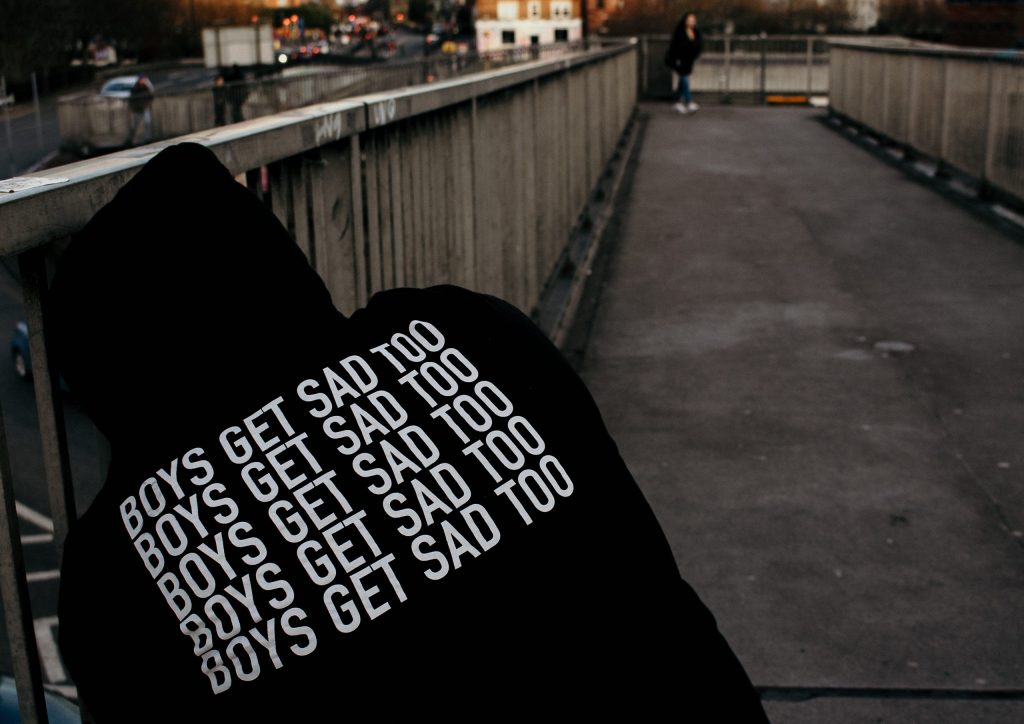 The higher suicidal attempts and death toll may likely be due to “toxic masculinity” traits most boys grew up with. This further translates into their ineffective coping mechanism where males are more likely to be independent problem solvers while females often ask for advice or seek help.

There is nothing wrong with having inherently masculine traits, however, it is problematic when it causes harm to themselves or to others. Social ills such as alcoholism and violence are forms of expressing inner turmoil. And it is possible that poverty can amplify these tendencies.

The toxic masculinity ideology has been spewed with negative connotations and firstly gained prominence in the past as retaliation to feminist movements.

Most of us can relate to or have heard these phrases spoken to boys, “Just man up!” or “Don’t be a baby, boys don’t cry”. These phrases hold much weight in forming the perspective of how boys should conduct themselves in public.

Boys who grew up in families with unhealthy and toxic notions of masculinity have to put on a front that they are tough, independent and any show of emotion is scorned upon. Inner turmoil that is not resolved can turn up in undesirable actions that may be perceived as masculine.

Despite, no gender breakdown on crime rates in Malaysia, the risk factor of crime are poverty-riddled boys, living in rural areas or urban poor neighbourhoods as well as being part of the minority groups.

Notably, crime rates appear to be higher in poorer urban circumstances, those who have fallen out of the education system and struggle to find stable employment [4]. The social ills that poverty induced the boys such as drug abuse and violent acts of crime is an indication of poorer emotional regulation. Plus, the media representation of what a male should be added on to the case that aggression is synonymous with being a man.

“Aggression is virtually the only emotion men are allowed to have. It’s because people believe that real men don’t cry, don’t complain or grumble.” Tamara Martsenuyk, a Ukrainian sociologist and associate professor of the Sociology Department at the Kyiv Mohyla Academy [5]

The factors of drug abuse participation consist of peer group influence, also seen as a form of escapism from the tough reality of poverty along with substances being accessible to their neighbourhood both in rural and urban areas. In addition, witnessing their father, a crucial role model leading the boys to a vicious addiction cycle.

A phenomenon that is unique in Malaysia is the illegal motorcycle racers or mat rempit. Mat rempit by definition is “individual or group who participates in illegal racing by riding a motorcycle at risk and is associated with violent crime” [7] . Arguably, their risk-taking behaviour is common with adolescence. However, their action also echoes the perceived masculine actions exhibited in films and songs [8]. The boys, part of the mat rempit group, emulate the warped masculine traits of a smoker, dashing, strong, brave, wanting to be respected, gaining recognition and acting aggressively [7].

“Each scar sustained from falling off motorcycles is like a feather in our caps as it earns us bragging rights over our endeavors on the road,” Wazi Hamid, former mat rempit [9]

The comfort of the temporary relief

With the stress of modern-day living, some men resort to coping mechanisms such as alcohol consumption and smoking.

High alcohol consumption is not just reserved for urban areas such as Kuala Lumpur but also in the rural areas of Sabah and Sarawak in which their homemade alcoholic beverages became a part of their selection [11].

Men are more likely to partake in social drinking and to affirm their manhood or masculinity in the group – they overdrink, challenging their alcohol tolerance and the result is health-related issues such as liver cirrhosis or even behaviour that could harm the general public such as drunk driving.

The issue of smoking is also notorious in Malaysia, smoking has been more common among the society. Based on National Health and Morbidity Survey 2019 findings, at least 4.8 million Malaysians aged 15 years and above are smokers. The proportion of smokers is 30 times higher among males as compared to females [12].

Interestingly, the high prevalence of smokers was recorded in states such as Kedah, Sabah and Terengganu and those who did not enrol into a tertiary education [12]. This is aligned with a study on smoking determinants which cites poverty or poorer circumstances would propel its inhabitants to use tobacco more [13].

“Cigarettes become good friends according to smokers to overcome a variety of negative emotions. Many smokers believe that smoking helps them cope with stress. They may feel calmer and less stressed while smoking, their bodies are experiencing just the opposite reactions. Smoking affects the performance in dealing with stress or psychological stress.”  From a study entitled Gender Differences of Smoking Perception among Adolescents in Terengganu, Malaysia conducted by M. S. N. Abu Hassan et al.(2019) [14]

The hidden pains of the traditional breadwinner

The traditional breadwinner is commonly men, and they carry the heavy burden of ensuring financial security to their family. During the pandemic, we observe almost 156,000 Malaysians [15] were laid off which resulted in the loss of income.  Men who are stereotypically held accountable for the financial running of a household experience loss of purpose.

“Male mental health is on a decline ever since the pandemic hit. Men do not usually let their wives to go to work as our culture expects men to hold all the financial burden of the family. This puts unhealthy stress on the male to perform but also on the wife who is now powerless.” Rizal Rozhan, who currently runs a support group for men in Selangor [16]

Many have associated poverty as a common denominator to domestic violence.  However, its perpetrator could be any man who in the light of stressful events could only resort to lashing out at the vulnerable. This is one of the biggest implications of toxic masculinity that is exerting dominance or power on the perceived vulnerable individuals; in this context; women and children.

Driving in the point, we observe a surge in gender-based violence and child abuse cases nationwide during the same period. Over 9000 domestic violence cases were recorded since the nationwide closure in March 2020 until August 2021 [17]. In 2020, the Women, Family and Community Development Ministry reported that there is a total of 4,349 cases of child abuse [18].

The act of domestic violence observed by a young boy patterned this youth’s future interpersonal relationship and his perception of what being a man and powerful entails. And a boy who is abused by his father’s rage would only keep mum in fear of being seen as weak.

The danger of toxic masculinity is the hesitation to seek help, as a cry for help is a meek trait, and – yes, feminine.

“Toxic masculinity also has detrimental consequences for the men who subscribe to these ideals. The very premise of hegemonic masculinity in some ways is based on the idea of isolation because it’s about being autonomous and not showing a lot of emotion. It’s hard to develop friendships living this way.” Stef Shuster, Michigan State University  assistant professor in Lyman Briggs College and the Department of Sociology [19]

Gender-based violence (GBV) in Malaysia proportionally affects the female population. But it is presumptuous as there is a lack of data on male victims in Malaysia. Male have often been ruled out as victims yet boys and men may be sexually assaulted as past headlines have shown. By practising toxic values of masculinity, we are silencing male victims and burying their stories.

At the same time, the “dominant alpha-male” trope should be reconsidered as in the long run we are inhibiting healthy emotional expression, which is undeniably human.

The root cause of toxic masculinity is the bitter gender stereotype that we have swallowed from generation to generation and the consequences led males to cope in ways to prove their manliness.

The repercussion of these values had also caused a lower likelihood among men to seek healthcare assistance, especially for psychosocial concerns [20]. This hesitation had only transformed to higher suicide prevalence amongst males in Malaysia. Not only that, males, globally, may only visit the hospital when general health issues are severe [21].

Men Are Human Too – Let Them Cry

Based on a simple poll on Wiki Impact’s Instagram account, perhaps, the tide has changed amongst the more educated group of males as more than half indicated that sharing their problems is not a sign of weakness, they would disclose if they were a victim of abuse and their willingness to seek help from mental health practitioners in moments of need.

However, it is not a cause for a celebration just yet, as there are at least 20% of our audience who are hesitant and find opening up about their problems makes them vulnerable.

Plus, most families in rural parts of Malaysia may still subscribe to damaging ideas of masculinity. As discussed prior, toxic masculinity only gives way to more criminal acts among the poor and a way to beat this is through education. It is also essential for every one of us, gender aside, to encourage the boys and men in our lives to channel their emotions to a healthier medium.

If you are suffering from mental health illness or interested to practice better emotional regulation, yet apprehensive to make the call or ring the bell of the counsellor’s office – help is just one click away as more and more mental health services are available online.