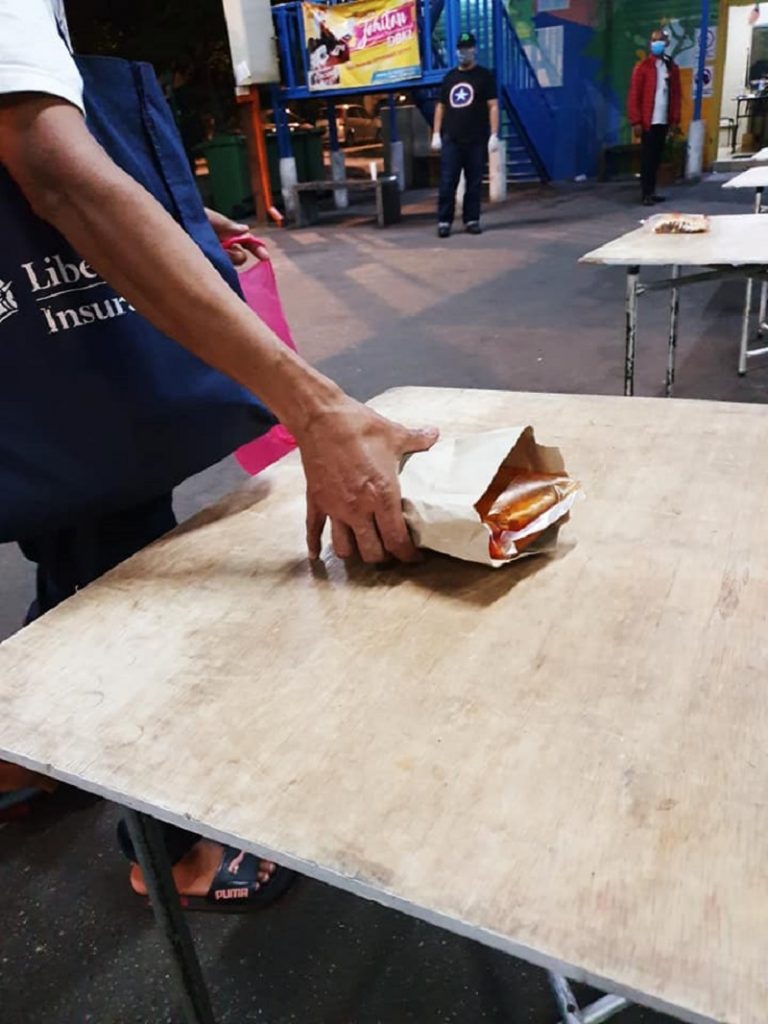 In a month that teaches moderation, Alam Flora cleared out 33,000 tonnes of food waste during Ramadan in 2021[1]. Solid Waste Management and Public Cleansing Corporation (SWCORP), on the other hand, is projecting that there will be an increase of 15-20% in food wastage during Ramadan and Hari Raya[2].

Of course, we are quick to point to the throngs of bazaars operating as the nation embraced endemicity. Some would attribute food waste to the long buffet lines in hotels as the number of reservations has only soared this year.

However, there is also food gone to waste stemming from good intentions. In the holy month of Ramadan, Muslims are promised more rewards (pahala) for acts of giving (sedekah). But, sometimes, good intentions alone aren’t enough when it comes to giving.

Food Wastage Not A New Problem

In the early years of her involvement, Datuk Munirah who helms PERTIWI Soup Kitchen, said the condition was under control. However, as more and more people would like to do their part for the community – the problem arises.

In our early years, everything was managed well, but as feeding street dwellers became a trend, it presented a problem with too much food being handed out.  – Datuk Munirah Abdul Hamid, President of PERTIWI which runs the PERTIWI Soup Kitchen program [3]

During the COVID-19-induced closures, food wastage was significantly reduced.

Wastage was controllable in the last two years as the pandemic restricted people from hanging out on the streets to give and receive.  – Datuk Munirah Abdul Hamid, President of PERTIWI [4]

Before the pandemic, a person could end up with 16 to 17 packets of hot food a night. – Justin Cheah, Operations Director At Kechara Soup Kitchen[2]

Nor is it an isolated issue among Muslim devotees as the Penang Hindu Association (PHA) has faced similar issues of uneaten food packets being left behind during New Moon Day at the temples[5].

Naturally, many people would offer food donations near the temple as it is where the destitute, poor and homeless linger. Though this practice intends to offer aid, this act of care creates a perishable surplus, which we want to highlight.  – P. Murugiah, president of Penang Hindu Association (PHA)[5]

Unfortunately, the food strewn on the streets would only end up in the waste bins eaten either by rodents before being cleared away by clearing services.

Give Some Thought Before Giving

The problem is however more acute during Ramadan, and this year, with the restrictions lifted, soup kitchens in Chow Kit and its surrounding areas are anticipating more food distribution that would only lead to wastage.

The donations came from ad hoc individuals and non-governmental organisations. Some, in the past, have come from outside of the Klang Valley to assist.

Sometimes, the unsold foods from traders end up in the hands of the homeless community.

In 2021, so much unsold food was dropped off at mosques and homeless areas or ended up in the bins. – Datuk Seri Rosli Sulaiman, president of the Malaysian Federation of Hawkers and Petty Traders Association[6]

This led to each homeless individual receiving 20-30 food packets at night. But as many soup kitchens have pointed out, it would be left to be cleared by Alam Flora.

It is heart-breaking to see mounds of food abandoned by the roadside. Imagine if the funds are used to purchase and prepare the meals which are given to those in need, and the aid reaches the right beneficiaries. – Datuk Nadzim Johan, lead activist at Persatuan Pengguna Islam Malaysia (PPIM) [7]

It isn’t that the homeless are ungrateful for the food distribution, but the condition of the food itself leaves a lot to be desired.

The community was saying; how can we eat so much biryani in a day? There was once when good Samaritans came from Pahang and cooked during sahur (pre-dawn meal) and by the time the food was distributed, the food was already spoiled. – Datuk Munirah Abdul Hamid, President of PERTIWI

It is also the consideration of what constitutes a good meal. PERTIWI Soup Kitchen serves a warm meal that constitutes freshly cooked rice, a source of protein and vegetables. But, meals coming from ad hoc donations may require some improvements.

The idea of a meal to them is probably rice drenched in curry or gravy. It is also important to realise that with the humidity in Malaysia, things go off very fast, so when you’re preparing a hot meal and serving, you cannot leave it out for more than a couple of hours – it goes off. – Datuk Munirah Abdul Hamid, President of PERTIWI which runs the PERTIWI Soup Kitchen program

There were instances when the communities were promised special gifts from celebrities or other organisations, and mothers and children would camp and wait on the streets till the middle of the night anticipating the arrival of the convoy of cars.

This, however, had only resulted in the children being unable to wake up for school, an issue she has seen prominently before the pandemic and now as we are transitioning to endemicity.

An additional layer to giving to the community has only fraught them with the sense of having less.

If people keep giving fancy gifts, and they stay up because they don’t want to miss out when their friends say, “You weren’t there that’s why you didn’t get this.” I don’t want them to feel that they have to stay up with their young children till late and wait for handouts so they don’t miss out on wonderful gifts. – Datuk Munirah Abdul Hamid, President of PERTIWI

Over the years, the homeless community has reduced in numbers and there is a well-oiled system that serves them. Credible NGOs which have stood the test of time and continued to change their strategy of giving have helped the homeless survive and even thrive.

The homeless and the urban poor are very well-looked after. The system is already very organised and well in place. The community knows where to get good food, they know where to get reliable sources of food because they’re all there. They are well aware of the collection points and the times to collect their meals. – Datuk Munirah Abdul Hamid, President of PERTIWI which runs the PERTIWI Soup Kitchen program [3]

With the boom in street feeders, soup kitchens had brushes with the authorities in the past. Sometimes, soup kitchens have been pointed out for perpetuating the issue of homelessness by feeding them, especially during Ramadan.

But they have learned to adapt to the situation after most of their advice has been ignored by the general public.

Anticipating donations from the public, PERTIWI Soup Kitchen operates on a rotational basis with other NGOs to avoid overlaps.

Meanwhile, Persatuan Pengguna Islam Malaysia (PPIM) is working in tandem with other NGOs to reduce wastage and ensure no one is left behind.

We also cooperate with several other NGOs to avoid wastage and ensure that all those in need are helped. – Datuk Nadzim Johan, lead activist at PPIM[7]

PPIM hopes that members of the public who are planning to provide food to the community will work together with existing changemakers to reduce food wastage.

It is best if they entrust it to others who are more proficient in aid distribution instead of leaving it damaged, stale and abandoned like that. – Datuk Nadzim Johan, lead activist at PPIM[7]

Kechara Soup Kitchen, on the other hand, decided to forego warm food and provide dry food instead.

We decided to give dry food which has a long shelf life and basic necessities instead of warm food.  – Justin Cheah, Operations Director At Kechara Soup Kitchen[2]

Channel Your Good Will With A Better Approach

Helping underserved communities does not necessarily need to be done through food distribution. Even in soup kitchens, food distribution serves as an ice-breaker to better understand the needs of the homeless community.

Food is one way for us to get them to open up. The homeless are not consistent in their schedules. If you see them today, you might not see them again at the next round of food distribution. So, when you have them there in front of you, you have to do your best to help them. – Justin Cheah, Operations Director At Kechara Soup Kitchen[8]

Hunger is only the tip of the iceberg. With their basic needs fulfilled, soup kitchens are developing steps to bring the community out of poverty. The best way the public can help them is through being involved with the existing programmes as a volunteer or filling in areas of need.

Our problem is no longer hunger. The best way to help the community is to work with other NGOs on the ground. Each one has a different focus. Join them at the centres where they are already running the programmes. Nurture them [the marginalised] and help them out of poverty. – Datuk Munirah Abdul Hamid, President of PERTIWI

Giving food and gifts are unequivocally an easy way of helping. The lasting impact on the community is never built in a day.

Get to know the community and do real work, there is no easy solution. It takes time. – Datuk Munirah Abdul Hamid, President of PERTIWI

As soup kitchens have shared, giving would have to be coupled with the following question: “How does the gifts or assistance affect the community?” In the past, it came without understanding the needs of the community itself. Before thinking of giving to the homeless and urban poor community, reflect on the words of Datuk Munirah:

Whatever your intentions of giving are, you have to do it without any self-interest attached. – Datuk Munirah Abdul Hamid, President of PERTIWI

In the spirit of Ramadan, let us consider once more the intention of fasting, which is placing ourselves in the shoes of the community. It is only by walking in their shoes, that we would recognise the differing needs of the underserved communities and that there is more than one way to help them.