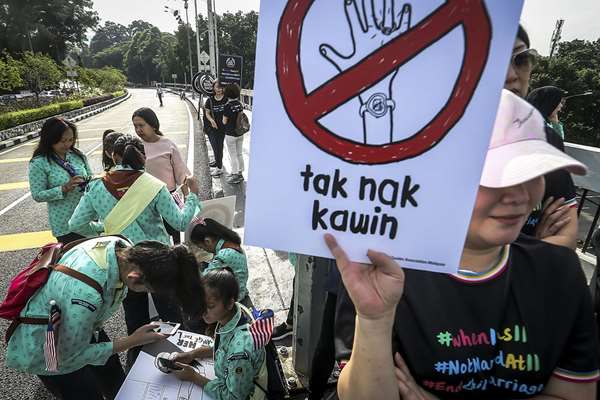 For a child who is forced to grow up too fast, their childhood memories become a distant memory far too quickly. The days that were meant to be dedicated to learning, creating, growing and playing are snatched away. These children are forced to pick up burdens that are only meant for adults – paying bills, raising children and growing a family. Truth be told, these burdens are a struggle, even for some adults – what more children?

Child marriage is what we are talking about here.

The occurrence of child marriage strips away a child’s privileges and forces them into adulthood with little or no skills and knowledge to chart the future. Let’s break it down here:

An estimated 12 million girls under 18 are married each year globally[1]. This is approximately 32,876 girls a day, or 23 girls EVERY MINUTE.

In Malaysia, at least 1,500 children marry every year, either via a formal or an informal union[2].

Where Are These Marriages Happening?

Contrary to popular belief, this is not just limited to rural regions. Child marriage occurs throughout Malaysia in both rural and urban settings. From Selangor to Sabah, all the states consist of both urban and rural regions.

Previously between 2013 – 2018, JKSM mentioned the states with the highest number of Muslim child marriage applications were Sarawak, Kelantan and Sabah. In comparison, non-muslim marriages were concentrated in Sarawak, Johor and Selangor[3].

Is It Just Religious Rituals?

The incidence of child marriage is not bound by geographical location, a certain ethnicity, culture, religion or tribe. It is seen in varied pockets of Malaysian society.

On the other hand, when a case study was conducted on the non-muslim marriages involving adults marrying underage brides – these marriages took place among Chinese, Indian Orang Asli and indigenous communities throughout Malaysia. There are even instances of marriages occurring within the refugee communities[2].

As it occurs in almost every ethnic community and religion in Malaysia, religion and culture are not the main reason these children are married. There is, however, a common thread among all underage marriages – most of them are socially vulnerable. They could have severe financial limitations or face marginalisation in other areas of life. These vulnerabilities make them highly susceptible to child marriage.

A variety of interlinking factors drive child marriage in Malaysia, each as important as the other.  Everything from legislation, social norms, lack of access to education and household income[2]. To properly mediate the issue of child marriage, intervention is required for each factor.

For example, a young girl from a low-income family may be inclined to help her parents financially if they are already doing poorly. Child marriage may seem like a good option as her family may receive financial assistance or a dowry for marrying off their daughter off. At the same time, the young girl may feel that she has helped relieve her parents from the financial burden of feeding and caring for her.

The simple-mindedness of short-term thinking, in many instances, have caused young girls to sell away their futures.

Malaysian law states that every Malaysian citizen child must attend school until Primary 6[4]. Many children drop out of school after that because their family cannot afford the hidden expenses of education such as transportation, school uniforms and books[5].

With no formal educational qualification, children are more prone to enter the workforce early or be married off at a young age. The effects of child marriage set off a trail of other negative impacts.

Recommendations To Combat The Problem

In March 2021, UNICEF released an advocacy brief that addressed the topic of child marriage in Malaysia. It mentioned that solving child marriage alone would benefit the country’s future generations and help Malaysia meet at least eight of the Sustainable Development Goals under the United Nations.

In order to do so, several recommendations were included to combat the occurrence.

1) To improve the centrality of data on child marriage.

This includes the need to address the need for standardised data collection and the lack of disaggregated data.

Children have to stay as children when they can. After all, childhood is a right, not a privilege.[1] – Tan Ejin, Advocacy Champion at the World Association of Girl Guides and Girl Scouts (WAGGGS)

For a more in-depth look at Child Marriage In Malaysia, its implications and the list of changemakers working to combat this issue, read our whitepaper.