Blind In A World That Relies Heavily On Vision: Malaysian Youth Shares Struggles In School And At Work 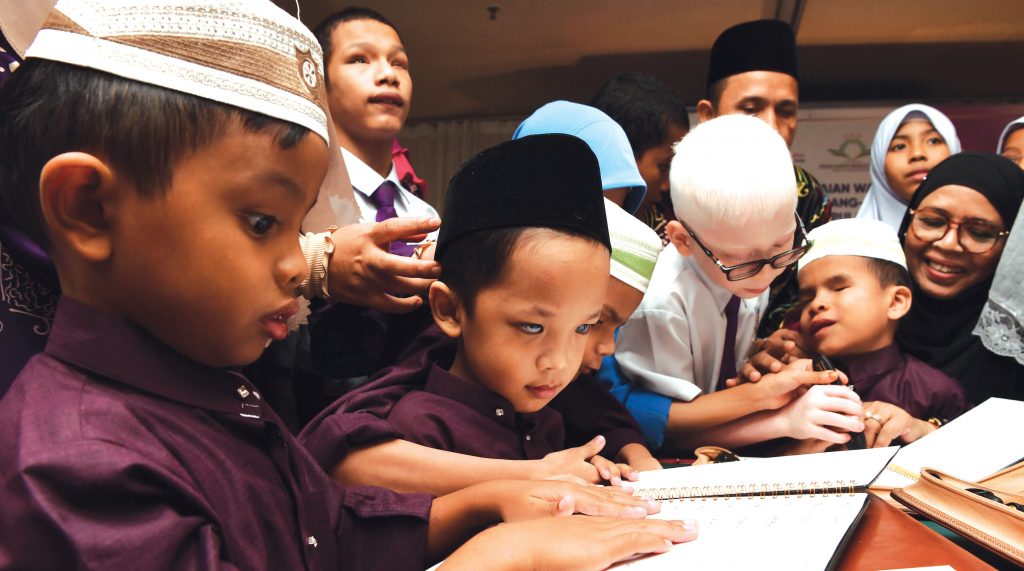 Suffering from or experiencing visual loss can easily affect the quality of one’s life. According to the World Health Organisation, around 1 billion people have cases of vision impairment[1].

Although statistics show blindness usually occurs in people over 50, it still has the potential to affect anyone under that age.

An individual suffering from any visual impairment makes it tough to manoeuvre around a society that heavily relies on vision. What makes it difficult is the lack of Braille facilities available, which would ensure the visually impaired have easy access to what they need.

For example, the ATMs once had Braille patterns on the keypads, but they are no longer available now that the machines are touch screens. Due to such a change, retrieving money proves to be more difficult than it once was. Likewise, many departments like hospitals and post offices do not have Braille installed or equipped to assist them[4].

Does it Have an Effect on Education Quality?

Having access to Braille books is no easy feat either. Many young Malaysian students with visual impairments are not receiving the appropriate materials to learn appropriately[5].

Some of my blind friends do not even have access to Braille books until late in the semester. This makes it difficult for them to get a quality education. – Hani Nursayahira Muhamat Halis, 15 year old student[5]

The case of a young visually impaired Malaysian who prefers to remain anonymous experienced difficulties throughout her educational years. She grew up completely blind due to being born prematurely at only six months old and attended schools for the blind until she reached university. There, she happened to be the only visually impaired student at Monash University Malaysia and she had to put in more effort compared to the rest of the students to keep up[6].

Sometimes, I would be left behind in my studies due to the enormous time required for the conversion and editing processes. – Anon, Visually Impaired Malaysian Graduate[6]

Similarly, Cheah Tzi Qi, now 24, was diagnosed with hereditary eye disease when he was only 16 years old. The eye disease turned out to be one with no cure, so he lost complete sight in his left eye and could only see to a certain degree on his right. Like any child suffering from it, he had his fair share of struggles when he had to attend school[7].

There was a time when I came out from my exam and my school bag (which was left outside the classroom) was missing. I searched for it the entire day and even my classmates helped me. Later, it was found in the rubbish bin. – Cheah Tze Qi, 24, visually-impaired employee at Food Dreams Kitchen[7]

Not only did Cheah have to endure the bullying from his classmates, but he also struggled to keep up with his secondary school studies. After completing his SPM, he realised the struggles didn’t end there as he learnt that getting a job due to his disability was near impossible.

He eventually met Stevans Chan, the founder of Dialogue In the Dark (DID), who also happens to be blind. Cheah got offered by him to work in a venture called Food Dreams Kitchen. There, he got the opportunity to work in a community where differently-abled people got hired and learned a lot from his job[7].

I want to tell other people with disabilities to stay determined and continue pursuing their dreams. Also, to be brave in taking that first step. – Cheah Tze Qi[7]

However, not many people have the chance to find a job despite their disability. Although many are educated and have the skills to take on the requirements mentioned in the job descriptions, they still do not land them.

Abby, who is in her 30s, has a human resources degree from Universiti Teknologi Mara. Still, instead of working in that field, she works by manoeuvring the streets of Kuala Lumpur to earn money. In order to do that, she sells tissues and uses the busking skills she learned from the Malaysian Association of the Blind (MAB) to make herself money. She says she uses a third of what she receives for her rental room[8].

Facing challenges and difficulties is something they have to experience on a daily basis, from having to travel around or having to find materials they want in accessible formats, the list is endless. The silver lining to this is that there are active changemakers supporting the visually-impaired community – in education, training, and employment, with the ultimate aim of helping them lead independent lives. Here are several organisations in Malaysia assisting the visually impaired in order to help them ameliorate their quality of life: