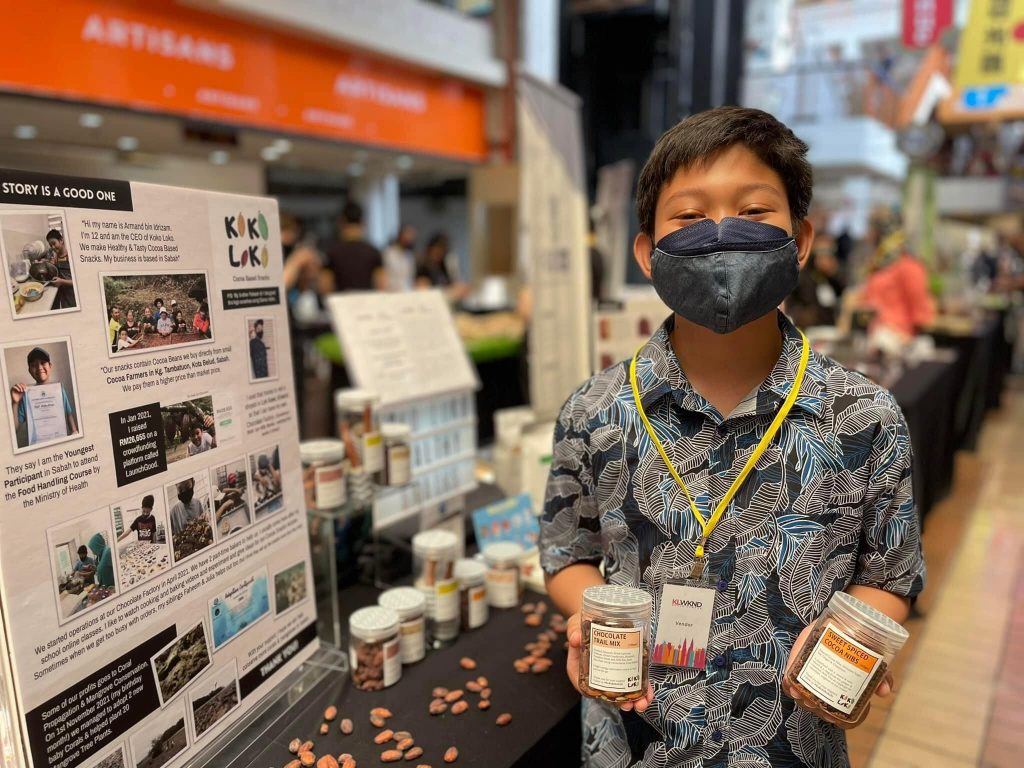 Meet Armand Idrizam, a young entrepreneur, who at a very young age had a vision and set it into motion to make it a reality.

Koko Loko is a cocoa-based business that purchases cocoa from small farmers in Sabah so they can get more income and also sell cocoa-based snacks to earn money for their own goals and help green the Earth by planting more trees, mangroves, and coral propagation.

The Beginning & The Spark

This journey first began when Armand accompanied his mother who was conducting a rural empowerment training programme in one of the villages. There, he got to see the cocoa trees weren’t being used to their full potential, igniting a spark within him and creating a desire to do something about this issue. But, that wasn’t the first time the young boy was interested in the world of business. Before the family moved from Selangor to Sabah in 2018, he was running a homemade sausages enterprise along with his siblings at the tender age of 6 before it came to an end due to their movement[1].

After the experience and having witnessed the situation in the village they visited, he began purchasing cocoa from the farmers and experimented with it in order to achieve his ultimate goal of creating chocolaty treats.

After the success of one of their first products, Cocoa Granola, they began working on their breakfast spreads.

I wanted to come up with a spread because I have very fond memories of eating peanut butter with chocolate swirls or jam. But I decided to mix things up and thus, we have the chunky cocoa peanut butter spread and the dark cocoa peanut butter, which is blended up with cocoa nibs. – Armand Idrizam, CEO of Koko Loko[2]

A step forward meant going for something bigger and grander. After the success of their first products, Armand opted to take it on a different scale and give the country a chance to get a taste of his chocolate business, introducing it to a larger audience. Another reason was that they believed making it from home wasn’t very hygienic[3]. On the suggestion of his mother, a funding campaign was set up and they managed to obtain more than the amount they needed, receiving a total of RM26,655. The Do Good, Eat Chocolate was then set up in Kinarut. It is located 20km away from Kota Kinabalu, which was where Armand and his family were busy baking and working[2].

In terms of the products they sell, there is a wide range of options with one of their first products being C4 Granola. They also sell two types of peanut butter (Lav Peanut Butter and Dark Cocoa Peanut Butter) and a wide variety of cookies such as Afghan Cookies, Mini Cornflakes, Chunky Peanut Cookies and Ginger Molasses Cookies[3].

Despite being a young Entrepreneur and running a business, Armand doesn’t struggle to juggle both his business and studies. During the weekdays, he spends Monday to Friday focusing on school work, assessments and homework waiting to be tended to. However, during the weekends or when he has time for himself, alongside the school holidays, that is when he focuses on his orders from Kuala Lumpur, Penang, and Sabah[3].

I usually settle my homework and school meetings by noon. All my extra time, weekends and school holidays are spent in the factory. – Armand Idrizam, CEO of Koko Loco[2]

At this point, his business is also thriving and it looks like the young lad is laser-focused on doing well, both in the business and school front.

The business is currently doing great as of now we have an air conditioner to make tempered chocolate and our new product the chocolate praline. – Armand Idrizam, CEO of Koko Loko

The Path Ahead & Future Goals

Armand’s greatest achievement was the beginning and birth of the company itself, actually getting it to start and seeing it grow, and he intends to continue maintaining it that way. He also intends to continue running the business, as one of his motivations is to grow corals and plant mangroves to promote a greener Earth.

One of his pieces of advice for young people just like him, who happen to want to become an entrepreneur as well, is to go and initiate it because you will never know what the future holds in store for you.

My advice is to go for it because you never know that someday you’ll be a successful entrepreneur. – Armand Idrizam, CEO of Koko Loko

Lastly, one of his biggest dreams and what he wants for Koko Loko is for it to grow in the future and become just as big as Milo.

I want Koko Loko to be as big as MILO, so I want the whole of Malaysia and other countries to know about our business. – Armand Idrizam, CEO of Koko Loko[3]

If you are interested in trying out and supporting Armand’s business, as well want to support and help Sabah’s farmers, check out their Facebook and Instagram.