All Fished-Out: The Impact of Climate Change on Malaysia’s Artisanal Fisheries 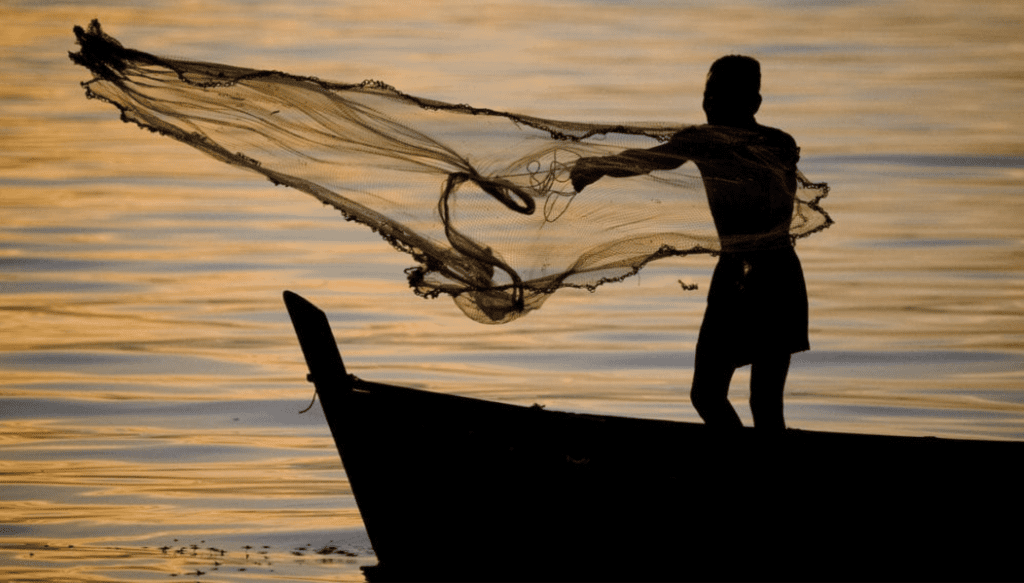 There was a time when fishermen in Mukim Tanjung Kupang were able to catch kilos of crabs and prawns in a single morning, making hundreds and sometimes, even thousands of ringgit a week.

Nowadays though, they barely catch anything.

Like it or not, we have to drift with the waves and wind to look for 1,000 ringgit [in seafood], but if we’re half-dead, what is the point? It’s dangerous so we might as well head back home. – Indasari Othman, fisherman[1]

The dwindling catch is a problem that has been plaguing Malaysia’s small-scale or artisanal fishermen in recent years. Livelihoods are at stake and the traditional skill of fishing is fading away because climate change and its impacts are being felt.

Artisanal fisherfolk (both men and women) form a vital part of many coastal communities in Malaysia, providing both food and income to such places.

The changing weather patterns, a direct impact of climate change, are currently affecting the artisanal fisheries. In the past, fishermen relied on wind patterns to determine where and when it is safe to fish. Recently, the winds have become far more erratic and heavy storms have become more frequent. As the small fishing boats used by artisanal fishermen cannot withstand such weather conditions, many fishermen are forced to return home early without catching anything[1].

No fish today. The winds were blowing strong and I came back. Not worth risking being capsized in the dark. – Lan Tumpat, Bajau Laut Fisherman[3]

Mukim crab fisherman, Muhamad Jainuddin Mohd Rosli is one of many affected. He recounts his younger years when he could take his boat out to the nearby coastline to get his daily catch, often hauling in up to 30kg of crabs in a single morning[1].

Nowadays, however, Muhamad Jainuddin would ride out for 30 minutes, hoping that the weather does not change too quickly. And when he does manage to make a catch, at best, he can only bring home an average of 6kgs of crab[1].

We used to be able to pull up our nets when the bad weather is approaching, but now we just leave it and head to safety first. – Muhamad Jainuddin Mohd Rosli, crab fisherman[1]

Bad weather is not the only thing artisanal fishermen have to worry about. Ocean temperature rise is one of the most distressing problems caused by climate change. A report by Universiti Putra Malaysia Institute for Social Studies indicates that temperatures in the country have increased between 1.75% and 2.69% over the last 50 years[1].

As ocean waters become warmer, it becomes harder for the winds to mix surface and deep waters, leading to increasing stratification that reduces oxygen content and affects nutrient distribution[4].

The warmer the water, the less dense it becomes and the harder it is to get it mixed. The surface waters warm to a point where the difference in density between the layers is so large that wind and waves can no longer generate enough energy to incorporate both the water layers. – Dr Aileen Tan, director for Universiti Sains Malaysia’s Centre for Marine and Coastal Studies (CEMACS)[4]

This change in nutrient and oxygen availability has affected the populations of fish and other marine life, causing some species to become unavailable during their intended seasons[2]. Others become more populous outside of their predicted seasons.

Previously, you’d almost never get squid during [the] Chinese New Year season here. It’s more in season towards mid-year. But [in 2021], we’ve been catching a few tonnes here and there since the beginning of the year. – Chia Tian Seng, Hai Seng Huat Fishery co-founder and operator[4]

But [in 2020] and [2021], fishermen have been pulling in kembung like you wouldn’t believe it, until even we are asking what’s going on. – Chia Tian Hee, president of the Sekinchan Fishermen and Fish Traders Welfare Association and the National Fish Industry General Association[4]

While this may seem like a boon, it is merely a prelude to far worse problems.

Warming oceans are linked to mass coral bleaching events, where warmer waters cause corals to expel their algae, turning them white and killing them in the process[4].

Such bleaching events have already occurred in Peninsular Malaysia multiple times, with the latest occurring between 2019-2020. And the bleaching event between 2014-2017 was one of the worst on record, in spread, severity and length[5].

Should greenhouse gas emissions continue at their current rate, it is predicted that Malaysia will experience far more severe annual bleaching events by 2043. At this rate, coral reefs will all but disappear, with an estimated decline of 90% by 2050[5].

Coral reefs provide a permanent habitat for many important fish species as well as endangered species. Some of the important species, which are commercial ones, in turn, provide food and livelihood security for coastal communities. – Dr Henry Chan, conservation director for World Wildlife Fund (WWF) Malaysia[4]

Dr Chan also notes that ocean acidification (a result of increasing carbon dioxide content) will make it more difficult for certain marine species, including commercially important ones such as shrimp and shellfish, to form their protective shells[4].

If the ocean water becomes too acidic, it can start dissolving their shells, and in turn, alter the food web too, where these animals are important food sources for commercial fish species. – Dr Henry Chan, conservation director for World Wildlife Fund (WWF) Malaysia[4]

More frequent rainstorms and changes in nutrient availability can lead to harmful algal blooms that can kill off the populations of commercially important species and affect their spawning and migration patterns[2].

Such adverse changes are already being witnessed by the residents of Mukim, who reported that unusually cool or unusually warm waters have adversely affected crab catches and created unseasonably high volumes of algal growth, hampering fishing efforts and destroying nets[2].

You have more frequent harmful algal blooms, increasing incidences of diseases and parasites. The growth rates of marine bacteria and fungi are positively correlated with temperature, hence resulting in increased fish mortalities due to disease. – Dr Aileen Tan, director for Universiti Sains Malaysia’s Centre for Marine and Coastal Studies (CEMACS)[4]

As you can imagine, all of these problems combined have led to plummeting fish stocks, further jeopardising the livelihoods of Malaysia’s artisanal fishermen.

Rosilawati Ismail, a fisherwoman for the past 14 years, observed that many of her peers are coming back empty-handed. The lingering effect of the Covid-19 pandemic is felt heavily by the community[6].

We spent RM120 (on fuel) to go out there but we came back with a catch worth about RM45 – we didn’t even cover our costs. – Rosilawati Ismail, fisherwoman[6]

Ibrahim Ismail is in the same predicament, noting that a fishing trip off the coast of Kuantan saw him return with only two senangin (striped threadfin)[6].

In the past, I could earn RM700 to RM800 from catching senangin, now it’s hard for me to even catch 10 fish per trip. – Ibrahim Ismail, fisherman[6]

In the past, I would travel about 8km and I could get kembong (Indian mackerel), kerisi (golden threadfin bream) and selar (yellowtail scad), now I have no choice but to go at least 40km out to sea to come back with something. – Rosilawati Ismail, fisherwoman[6]

Many artisanal fishermen will even cross the maritime border into Indonesia, risking their freedom to make ends meet. This issue is further compounded by the fact that the exact maritime border between Malaysia and Indonesia isn’t always clear[6].

I have no choice but to enter Indonesian waters almost every day. This is the only way for me to survive. – Mohd Zuhir Lamsah, fisherman[6]

Other artisanal fishermen, unwilling to risk such dangers, find other means of making money. In the case of Mukim fisherman Indasari Othman, he started doing part-time work washing boats to make enough to feed his family of six[1].

I get 20 ringgit (US$4.50), and sometimes 30 ringgit for washing boats, so that’s one way for me to make some money. When I cannot go out to sea, I can’t even bring back some catch for my family so that’s additional spending on food for the day. – Indasari Othman, fisherman[1]

Others have started venturing into ecotourism as a new source of income, using their expertise to take amateur fishing enthusiasts out on their boats to experience sea fishing[6]. Pontian resident and part-time fisherman Mazlin Rahmat is among those fishermen.

I’ve emptied my pockets but luckily I received a booking from some people who wanted to go out fishing. What’s even luckier is that our tauke was willing to put up the money for diesel upfront and allow me to pay it back later, otherwise I wouldn’t have been able to accept these customers. – Mazlin Rahmat, part-time fisherman[6]

Meanwhile, fellow Pontian resident Rasid Md Said has been tapping into his creative side by making bamboo ships and other ocean-themed handicrafts to supplement his income nowadays[6].

I once sold pisang goreng but when the competition became too much I had to stop. So now I try my luck selling handicrafts, both physically and online. – Rasid Md Said, fisherman and handicraft maker and vendor[6]

Not everyone is as flexible, however; Muhamad Jainuddin is one of many who grew up as a fisherman and has more difficulty finding non-fishing-related jobs[1].

We cannot do alternative work because we only know how to fish. So what else can we do but to wait until the storms go away? – Muhamad Jainuddin Mohd Rosli, crab fisherman[1]

Regardless of whether they adapt or not, one thing is for certain: Malaysia’s artisanal fishing culture is dying out.

An Uncertain Future For Artisanal Fishermen

As certain fish are becoming scarcer, their prices have started going up. Ironically, it is this scarcity that makes it more difficult for artisanal fishermen to take advantage of the price hikes.

I went fishing for three days. The first two days I came back with nothing. On the third day, I got three red snappers which earned me about RM1,000. – Mazlin Rahmat, part-time fisherman[6]

This is just one problem out of the many listed here. A problem that is threatening the existence of cultural heritage.

A ground-up approach is needed to help artisanal fishing communities with these problems. It requires grassroots sustainable fishing programmes, community-managed habitats and efforts to improve fish stock or release fry[2]. Above all else, we need to listen to artisanal fishermen and learn how to apply their knowledge and experiences to aid them in this dilemma.

Artisanal fisheries are more than just a part of our cultural identity; they are vital in preserving our marine ecosystems and ensuring our country’s long-term marine sustainability.

These were the foundation – the coastal villages, the inland fisheries – this is the basis of our people and if we allow them to disappear because now the fishermen are more endangered than the fish, we lose all that heritage. – Serina Rahman, visiting fellow at the Malaysia Studies Programme at the ISEAS-Yusof Ishak Institute Singapore[1]