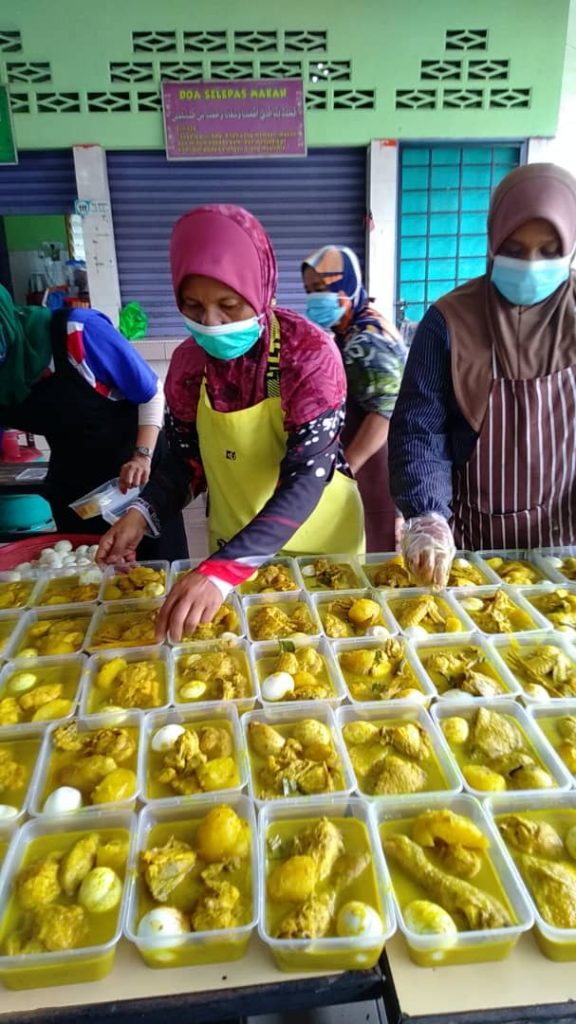 Cikgu Nor Azainah Adnan, 52, diligently takes note of hungry students coming into her class falling asleep or losing concentration. Since 2019, she decided to visit her students at their homes periodically. There she took the time to understand the challenges they were facing and noted their needs in writing. Over time, this collection of notes is now a database of over 600 families in Lembah Subang that she has helped.

As my classes begin at 230pm, I will ask my students what they have eaten and some of them will tell me they only ate plain bread. They say their mum did not cook as there are no more groceries at home. I record the name of the student and then visit them. – Cikgu Nor Azainah

Being a school teacher, Cikgu Nor Azainah meets students from all walks of life. She made it a point to them individually and not just as a class or grade.

Some of my students come from broken homes or vulnerable situations. Many homes that are often led by females tend to be the most vulnerable. Homes with many children often lead to the children going hungry. Some of these vulnerable kids succumb to stealing because they become desperate.  – Cikgu Nor Azainah

Cooking Up A Storm In The Midst Of One

During the pandemic, she knew that the community she was serving would be hit hard. True enough, many had to put their jobs on hold, some lost their livelihoods and a majority could not afford basic necessities and daily meals.

Cikgu Nor Azainah went straight into problem-solving mode. She rented the school canteen of Sekolah KAFA in Lembah PPR Subang for a small fee and organised several women to cook for families in need.

With her own money and monies raised from friends and family, she bought basic essentials and groceries and delivered them to various homes.

I have been organising this [feeding initiative] since 2009. During puasa months especially, I can feed these families daily because I have a steady stream of donations. During other months, I help them whenever I have sufficient funding. – Cikgu Nor Azainah

Cikgu Nor Azainah makes giving so simple and affordable. She calculated the cost of goods and decided to cap it at RM6 per meal for a family. Donations were given by friends, family and the public go toward buying ingredients, paying rent for the school canteen and giving the women who cook a small token of appreciation for their hard work.

Activity at the school canteen rarely stops! There was an occasion when the team of women cooked up to 200 chickens and 200 kilograms of meat to feed 600 families.

A Community Networker By Nature

A former teacher of student affairs at a public school, Cikgu Nor Azainah has a gift of organising. Apart from managing the team of women in the school canteen, she meticulously records stories of different people she comes across – information on their employment status, social issues, family hardships, education challenges are all remembered.

Cikgu Nor Azainah’s eye for detail is her way of caring and giving back. She knows the people she helps and their stories matter to her. And unfortunately, at times, the data she records helps her make clear decisions on who needs the help most.

The pandemic has heightened the problem of hunger among the vulnerable. Many do not have enough to go by day by day. I am unable to feed everyone so we will have to be selective in our giving. Only those who are in desperate need, we will focus on them on that day. Daily, I help up to 50 families per day, depending on my funds. – Cikgu Nor Azainah

Three Lessons We Learn From Cikgu Nor Azainah

The teacher painstakingly takes note and collects data of those in need. With that information, she can be more effective in giving and distributing help to those in need.

#2: A catalyst can rally an army of changemakers to transform a community

There is definitely power in one person making a difference. However, effective and purposeful change requires more hands in the plough. This story teaches us that when a community comes together greater change can happen.

#3: Realise your key strengths and allow others to compensate where you lack

In the case of this teacher, her strength is through organising and rallying for support. As an employed teacher, she does not have the time to cook or give out food to every family – hence she enlisted people who can use their skills for the greater good so that she can focus on organising and fundraising. She galvanised support from her community to support.

How You Can Help

If you wish to support the good work that Cikgu Nor Azainah has started, you can get in touch with her for more information.