Abandoned But Not Forgotten: How Senior Citizens On The Streets Are Helped By Changemakers 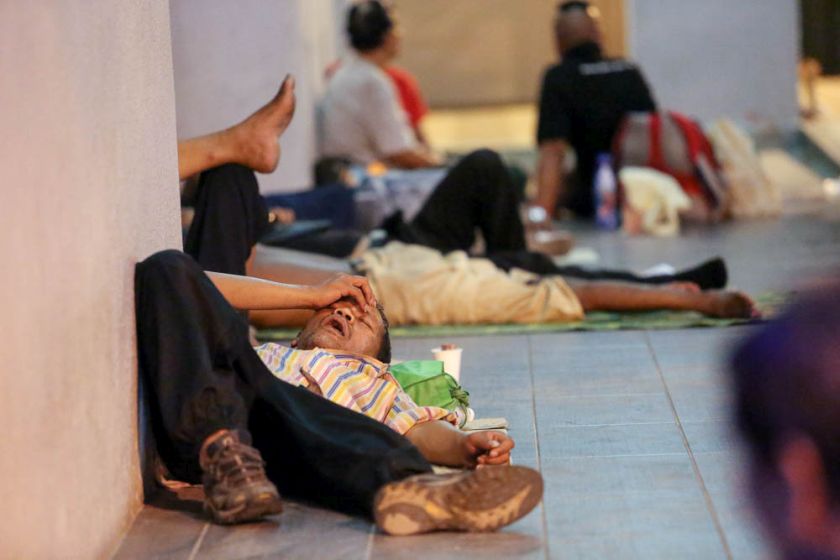 Behind all the skyscrapers and alluring constructions submerging the numerous cities within the country lies another story once it is unveiled.

With many retrenched, they no longer received the payment they needed for rent and they struggle to buy the food necessary for survival[2]. Many homeless people are left without shelter due to the conflict that ensues within their families and their families or friends no longer have the means or are willing to help them in their time of need[3].

I’m old already, so it’s hard for me la. I’m jobless and I also don’t ask for any government welfare or anything. Yes, I’ve been collecting this (recyclables) to sell them. I get a bit of income from doing this la. – Aunty Fern (not her real name), 72[4]

The number of homeless people has only increased in the past few years with the elderly and urban poor amidst the crowd[5].

Many are elderly folk who have no income and need food to survive. A recent video, taken in Kompleks Ruby in Jalan Kancil, Pudu, shows many elderly sitting along five-foot ways and restaurants waiting for food and groceries to be distributed. This is happening everywhere. – Francis Tan, Tzu Chi Foundation Malaysia recycling coordinator[2]

According to the 2018 National Health and Morbidity Survey by the National Institute of Health, 79% of the elderly in Malaysia have hypertension while 42% are suffering from hypercholesterolemia (high cholesterol), and another 28% were reported to have diabetes[5].

Many homeless senior citizens feel afraid or too shy to visit health clinics to seek help as they feel neglected by society[4].

Dr Madhu Shanmugam of the Teddy Clinic realised the problem and has been making medical care more accessible to the homeless, since 2015. Being nicknamed the ‘The Teddy Bear Doctor’, he dedicated his time to treating the poor who required medical aid and attention. He treats his patients at homeless shelters to ensure they lead more comfortable lives by giving them medical treatments for free[4].

Most of our homeless friends are undergoing a lot of stress, the poor living conditions are one of the reasons most of them have high blood pressure. – Dr Madhu Shanmugan, Doctor at Teddy Mobile Clinic[5]

Although many of the homeless and elderly are in government shelters, there are others that do not have a place and live outside under frigid and challenging conditions.

Another volunteer, Dr Ming Hui Ying, stated they see around 50-60 cases every Saturday when Kechara Soup Kitchen (KSK) sets up the operations in two stations at Medan Tuanku and Pudu. The medical and food team caters to the ones in need of medical treatments living on the streets. The team also taught homeless individuals to take better care of their health by having a healthier diet[5].

I believe the number of urban poor will increase in the coming years, which is very concerning. We must be prepared to help and feed them – Gurmit Jassal, Coordinator at GCS KL[7]

Coping in times of need when you have no one else to turn to can be difficult. A common reason why the elderly turn to the usage of drugs and alcohol during their late years is due to not having someone to live or socialise with. And even if the substances taken among the elderly are considered to be fairly small, the heaviest substance users are among people over the age of 55[8].

Casa La Obe 60 (CLO) is one of the shelters operating under the Malaysian Drug Intervention Community (Komited). It is a rehabilitation centre and a shelter for drug users for citizens aged 60 and above.

Abang Azizi, who was a former drug user and used to be a shelter resident himself, is now in charge of the six residents occupying the shelter. The shelter attends to the resident’s health by monitoring their medical intake and future doctor appointments. Azizi would assist by taking them to the hospitals to attend hospital appointments[4].

I came to Komited to build a new life for myself and to save myself from dying alone under the bridge or somewhere isolated. – Abang Azizi, a former drug user working with Casa La Obe 60 (CLO)[4]

A 72-year-old resident of CLO, Tajul, and also a recovering drug user, stated he was happy to have settled where he is surrounded by his friends[4].

The same applies to another senior citizen named Maniamah, a resident in a home for the elderly in Jalan Haji Ahmad. Previously, she spent her days sleeping on cardboard panels on the corridors of a block of flats before she was discovered by a good samaritan named Chan Chung Kuang, who temporarily moved her to the shelter home.

At first, the plan was to find her family members. However, no one seemed to step forward. Although she hopes she reunites again with her family members, Muniamah is grateful she has finally made friends and was able to spend Deepavali this year meaningfully[9].

Last year, I wasn’t even aware that it was Deepavali until someone told me. They gave me some food. This year, I have new friends and I am grateful to have proper meals and a good place to stay. – Muniamah, Senior Citizen[9]

Just like these organisations and changemakers that are extending their hands to assist the senior citizens during their golden years, here are several other groups that are achieving the same: