A Young Syrian Refugee’s Story Of Survival To Social Transformation 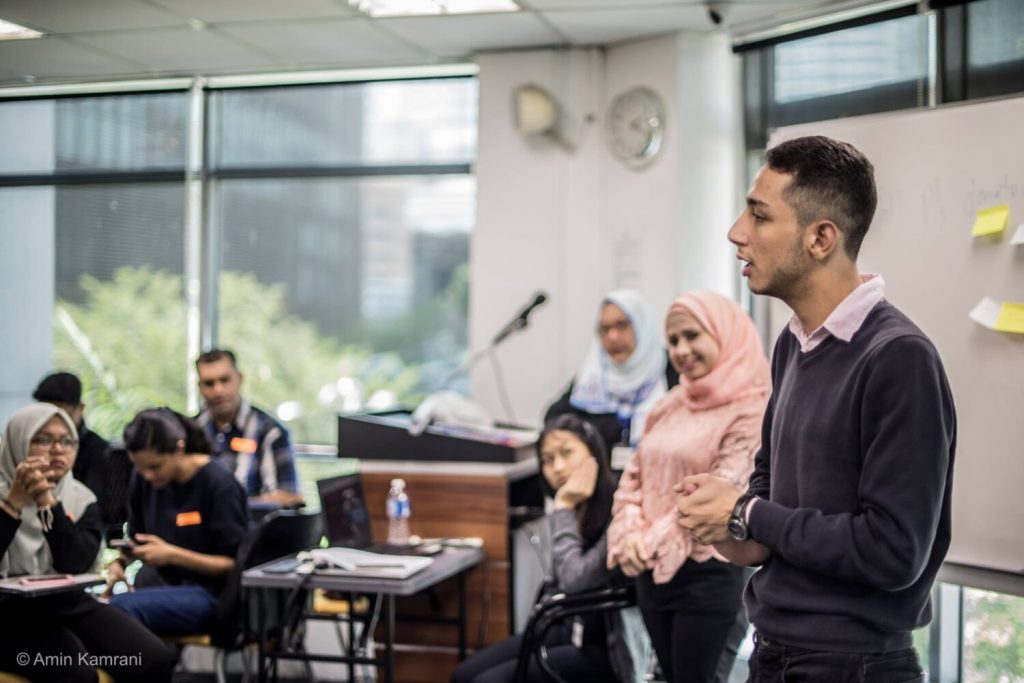 In 2011, a young Syrian boy was on a rooftop with his cousins, listening attentively to his mother as she indulged them in a bedtime story. It was a warm, peaceful summer night at home with his family.

Until all of a sudden, bombs flew over them—engulfing the neighbouring village in flames.

The family quickly went downstairs. But even as they hid underground, the continuous sound of explosions penetrated the walls and made it difficult for them to sleep. The next day, they woke up to the heart-wrenching sight of a destroyed village.

Such was the experience of Hasan Al-Akraa when he was 11. For their safety, Hasan and his family had to flee from war-torn Aleppo and move to Malaysia in search of a better future. Adjusting to life in a foreign country was not easy, but Hasan was determined to make the best of his circumstances. He was especially keen to help young children who, like him, had lost their homes to war and conflict.

What started as a volunteering teaching position at a refugee school blossomed into a profound love for education and community service.

At the age of only 16, Hasan founded Al-Hasan Volunteer Network (AHVN), a non-profit organisation dedicated to uplifting refugees and underprivileged Malaysians. Along with a team of over 500 volunteers, Hasan currently runs over 14 projects for marginalised communities in Malaysia[1].

This is the story of Hasan Al-Akraa. A Syrian refugee who, despite having so much being taken away from him, continues to give.

A Teen Working To Live

When Hasan and his family first arrived in Malaysia, his father fell ill. To support his family, Hasan decided to step in by working at a restaurant. He washed dishes, cleaned tables, and ran restaurant errands at just 12 years old. From not knowing a word of Malay or English, Hasan learned to master these languages on his own by reading books and newspapers, as well as watching TV.

Witnessing Hasan’s quick improvement in language and communication skills, his boss decided to appoint him as the chef’s assistant and cashier.

It was hard to work 12 hours a day, at a young age, with very little payment. But I didn’t care; all I wanted to do was to protect and help my family pay house rent and other bills[2]. – Hasan Al-Akraa

One day as he sat behind the counter, what he expected to be a typical day at work quickly turned awry when a group of immigration officers raided the restaurant. Along with a few other coworkers, Hasan was arrested and put in handcuffs.

As it turns out, refugees like Hasan do not have the legal right to work—Malaysia is not a signatory to the 1951 UN Refugee Convention.

They put me in a lorry of 20 people and handcuffed me. Being only 14 at the time, I was terrified[3]. – Hasan Al-Akraa

Hasan spent a total of 9 days in a detention centre—one of the most horrible experiences in his life.  Cramped in a small room with 20 other detainees, Hasan could not sleep for days. Gradually, he became depressed.

The conditions were dehumanising; it was a traumatic experience Hasan finds painful to recollect. Along with the other refugees, Hasan was forced to sleep on the floor and endure unsanitary conditions, pungent smells, hunger and abuse. Overwhelmed by distress, suicidal thoughts began to occupy his mind. Hasan nearly wanted to give up.

It was dark. All of us had to sleep on the ground. It was so horrible inside the detention centre that I thought to myself, I’d rather die with dignity in a war rather than in a horrible condition like this[2]. – Hasan Al-Akraa

What helped him hold onto hope were the three friends he made in the detention centre. They were younger than him— 11, 12 and 13-year-old Rohingya children. As they exchanged stories, Hasan realized how lucky he was.

One of the kids had to witness his own father being murdered. One had his family’s house and his village burned to the ground. By boat, they spent months crossing the ocean to reach Malaysia, hoping to finally find refuge.

Unfortunately, they were arrested the moment they arrived.

Hearing these stories prompted Hasan to reflect on the blessings of still having his family with him. Moreover, unlike many refugees, Hasan was documented. His UNHCR card meant that he could soon leave the detention centre instead of facing immediate deportation. He began to be more grateful for what he had.

Upon his release, Hasan felt a mix of emotions: he was happy to return to his family, but he also felt sad to part with the children. Thereon, a strong desire emerged. He wanted to do something for those in need. For young, refugee children—much like the three kids he met in the detention centre.

Finding The Power Within For Greater Good

This compelling introspection was what encouraged him to volunteer at various refugee schools. Always keen to share his knowledge, Hasan’s enthusiasm remains evident from the way he teaches his students English with great passion.

My main aim was to inspire the children to come to school every day with the hope that tomorrow will be better[2]. – Hasan Al-Akraa

From his interactions with the school community, Hasan learned more about the challenges faced by refugees, particularly healthcare, employment and educational barriers. This sparked his interest in joining NGOs and participating in charity work to help troubled communities facing these situations. Thereafter, Hasan began to carry out his own workshops and training programs for refugee youths.

Hasan’s work increased as he became more involved with community projects, but so did the number of volunteers eager to help him with the cause. This was when he decided to launch his own non-profit organisation, called the Al-Hasan Volunteer Network (AHVN)[4].

Alongside partnering organisations, the network has carried out numerous projects that cater to not only refugees but disadvantaged local Malaysians too. From funding health checks, emergency surgeries, providing education for children and upskilling programs for the youth, Hasan’s projects in AVHN covers various community concerns.

Other than attending to medical and educational needs, Hasan also finds joy in fostering a tight-knit community through fun and meaningful activities. During AVHN’s ‘Our True Colours’ program, volunteers painted murals at refugee schools, orphanages, PPR centres and elderly homes to brighten up the environment. To further provide a sense of belonging for refugees, Hasan organized community dinners, women empowerment programs, athletic events, as well as Eid and Mother’s Day celebrations[2].

More recently, AVHN collaborated with Faith Freemarket to distribute Eid Baskets and toys to over 400 refugee children[5]. Along with a group of volunteers from SEGi University, Hasan also carried out ‘Camp Hope’, a virtual programme to provide mental health and emotional well-being support to refugee teenagers[6].

By the end of 2020, AVHN had funded over 200 medical cases and collected over RM300k in donations. To this day, Hasan continues to wear many hats: he is a teacher, public speaker, social activist, fundraiser and community organizer. Acknowledging the heightened risks towards refugees amidst COVID-19, he also works with Asylum Access Malaysia to disseminate information on the vaccine rollout to refugees by making video tutorials in several languages[7].

We are encouraging them to register, and soon, we are planning to conduct online workshops for refugees to come forward and ask questions that they might have about the vaccine[7].  – Hasan Al-Akraa

Hasan’s unwavering dedication to serving the community continues to fuel his efforts until today. In one of his TED Talks, Hasan highlights a common dilemma amongst youth when taking the leap of courage in creating change. He reminds the audience that helping does not always have to come in the form of grand charity work or large-sum donations. Rather, he encourages people to start small: by stirring discussions on refugees among our own circle of family and friends.

Hasan also encourages people to befriend refugees and to use social media as a tool for advocacy. By amplifying refugee voices and stories, one can raise awareness of the barriers and struggles faced by these communities. “That is what we really need,” he says[2].

We often doubt ourselves and feel that we might not be capable of making any change. But that’s not true. If you look within your own power, there are so many things that you can do[3]. – Hasan Al-Akraa

In one of his speeches, Hasan outlined a common misrepresentation of refugees: that they are unqualified and have nothing to contribute.

He corrects this by pointing out that many of his refugee friends were once nurses, doctors, engineers and teachers—intelligent individuals who graduated with high degrees and qualifications in their home countries. However, because refugees aren’t allowed to work in Malaysia, many of them ended up working in restaurants, unable to utilize their knowledge and skills.

Imagine studying so hard for almost five years—spending so much time, money and energy—only to end up working as a waiter. How would you feel?[8] – Hasan Al-Akraa

From Hasan’s story, we can already see that refugees have much to contribute to their host country if given a chance. In fact, many of AVHN’s volunteers are refugees themselves—a clear testament that many refugees are keen to extend a helping hand, even when they are in need of help themselves.

From his heartfelt community work, Hasan shows us how refugees can be agents of positive change and social transformation. Not just to their own communities, but to others too.

A Dream To Rebuild Syria

Despite his numerous community service projects, Hasan still makes time for what he loves most: education. Currently pursuing his foundation studies at the University of Nottingham, he hopes to equip himself with knowledge and skills to become an educator in the future[9].

His dream to rebuild his country and educate Syrian youth continues to become a driving force for his actions. Also aspiring to become Syria’s Education Minister one day, Hasan seeks to reform the education system to create one that would instil love, respect, and humanity within its people.

I look up to Malala Yousafzai. She is proof that education is stronger than a gun. With education and knowledge, we can change the world.[10] – Hasan Al-Akraa