A Slow Fade: Why Tamil Schools Are Disappearing In Malaysia 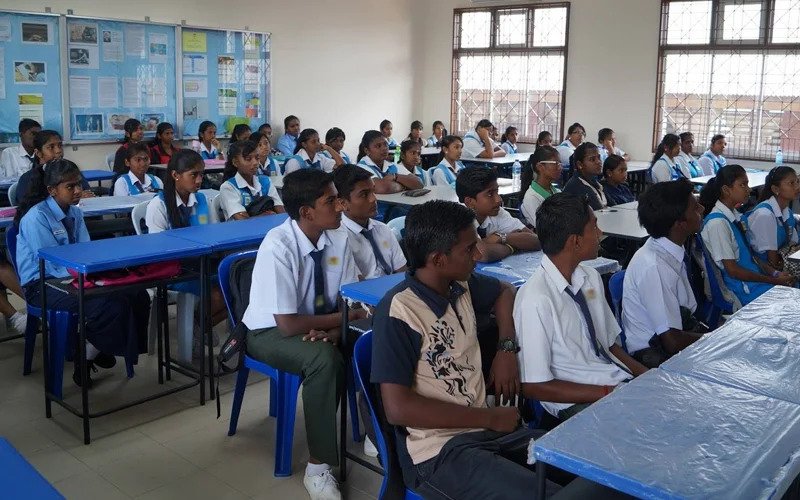 When Angel Nathalina was set to enrol in a Tamil school as a then 7-year-old, the reality was a vast contrast from her expectations. Growing up in an English-speaking household, Tamil was a foreign language to her.

It was definitely a culture shock at first. I transitioned from a preschool that had many different races and religions. It was hard for me to adapt [to] a school that was attended by a majority of Tamil-speaking Indian kids. This was because I didn’t know the language coming into the school.– Angel Nathalina, Broadcasting student

Although she’d hear fellow Indians around her converse in Tamil, she never thought she too would one day have that privilege. Today, Angel attributes her fluency in Tamil to her once worn-down, single-standing building Tamil school in Penang.

26-year-old Alvin Yinab shares a different perspective. Alvin grew up in an ethnic household. Enrolling in a primary Tamil school for him was a natural next step. Throughout his primary years, Alvin received formal education at SJK(T) Sungai Ara, in Penang.

I’m a Tamilian, born in a Tamil-speaking family. Learning Tamil Is part of my identity. There is pride. There is a phrase in Tamil Nadu, India that says “People don’t speak Tamil, They Breathe Tamil”. – Alvin Yinab, Engineer

Just like Angel and Alvin, other Malaysians have their own stories and experiences of pursuing their primary education in a Tamil school.

Though their experiences may be different, they share a similar fate – not having an option to continue their education in a Tamil secondary school. This is because there isn’t one in Malaysia.

Yet, 200 years later, the fate of Malaysian Tamil schools is still on the fence.

In the early 20th century, the British colonial period was the dawn of the nation’s Tamil schools[2].

It was also during the colonial period that a large migration of Indian labourers were brought in from Tamil Nadu to work in estate rubber and sugarcane plantations. To secure an Indian workforce for a long period of time, the former colonial government was adamant about establishing Tamil schools[2].

What followed was the start of Tamil schools amongst the estate plantations.

While there was a call to establish Tamil schools, the Tamilians dealt with several other issues. For decades, poverty engulfed the lives of the Tamil plantation workers. This was an addition to their daunting realities of having little to no freedom and living in fear[2].

Protecting The Rights Of Indians in Malaysia

Today, the vision behind Tamil schools has changed for the better. These schools exist for the betterment of the Indian community and open their doors to those passionate about the Tamil language.

Some say that Sanskrit is the oldest language. But it’s a dead language. Tamil is the living language. By knowing Tamil, I get to read Tamil history, politics and social justice as well. These ideologies really impacted me as a person and my beliefs. All these happen because I know Tamil. Thank God. – Alvin Yinab, Engineer

For those who have attended Tamil primary schools, the experience paints a picture like no other. However, it is an unfortunate and sad reality that they’re not able to elevate these experiences by progressing in a Tamil secondary school.

At the school I attended, it was always a tradition that everyone goes to the temple together every Friday morning. Seeing as my school was behind an Indian temple, every Friday morning the teachers would get all the students in order to walk to the nearby temple. Even though I am not a Hindu, they still let me come along. It was a very fun experience I always looked forward to, especially because of the delicious food served at the temple. – Angel Nathalina, Broadcasting student

In 1958, SMK Vivekananda – the oldest school in Brickfields, stood as the only secondary Tamil school. A few years down the road, it was transformed into a non-vernacular school[3].

It was tough in the beginning, people made fun of me because my English was poor. Even fellow Indians in my secondary school made fun of Tamil schools. At that time, it was very painful. These Elite Indians thought if you know English, [you were] an intellectual, a “Puluthi” (show off). But murderers, thieves and rapists in the US speak English. I’m not against the English Language. Now I’m an Engineer and I speak standard English. Elite Indians act like it’s knowledge. People are changing now. Tamil schools are at a different level,  their UPSR performance is better than the SK schools. Not far from beating Chinese schools either. – Alvin Yinab, Engineer

Amidst the struggle, prominent figures in Malaysia – the late Tun Samy Vellu and Lim Guan Eng, have been advocating for the establishment of Tamil secondary schools, and for the legacy of the Tamil language to live on.

However, their efforts crumbled through the cracks of countless rejections.

Aside from being rejected, the existing Tamil schools in Malaysia operate on a tight budget.

This was especially evident when the estate workers who built the first Tamil schools lacked the fundamentals. As such, these schools lacked proper infrastructure, teaching facilities and qualified teachers[2].

The same fate was lived out by numerous Tamil schools in Malaysia decades later. In Penang, SJK(T) Subramaniya Barathee was once a worn-down one-story school that lacked proper security and educational facilities for conducive and safe learning. On occasion, outdoor learning meant conducting classes in the school canteen.

Today, this school has been revived and relocated, equipped to educate. But it doesn’t change the countless years prior when previous students were subjected to a poor learning environment.

To tackle the issue, the root cause must be identified. In many instances, the lack of stable infrastructure points back to the financial constraints these schools face.

In 2022, the Education Ministry received a budget allocation of RM52.6 billion[4].

This budget will continue to prioritise education as the most important segment in the government expenditure. – Datuk Seri Zafrul Tengku Abdul Aziz, Finance Minister [4]

But if education is a priority, it should be inclusive of all schools, irrespective of the medium of instruction or type of school.

In another instance of injustice, the allocation of funds for Tamil schools was slashed by 40% in 2021. Tamil schools only received RM29.98 million to cover administration costs. To make matters worse, the Tamil schools were not allowed to purchase learning and IT equipment with the same funds[5].

A Silent War In Plain Sight

Despite there being a call for change, matters pertaining to the Tamil education route are often swept under the rug.

In December of 2021, three associations – the Federation of Peninsular Malay Students (GPMS), the Islamic Education Development Council (Mappim) and the Coalition of National Writers’ Association (Gapena), filed a suit against vernacular schools in Malaysia.

These associations questioned if the existence of vernacular schools goes against provisions in the Federal Constitution. Ultimately, the suit was dismissed. The judge ruled that the existence of about 1,800 such schools, catering to about 500,000 students, is legal and constitutional[6].

Given that the use of Chinese and Tamil in vernacular schools as a medium of instruction is constitutional as it is protected under the exceptions in Articles 152(1)(a) and (b) of the Constitution, there is no basis to contend that the establishment and existence of vernacular schools are inconsistent with or infringe Articles 5, 8, 10, 11 and 12 of the Federal Constitution. – Justice Datuk Mohd Nazlan Mohd Ghazali,  High Court Judge[7]

Although the judge ruled in favour of the defendant, it goes to show that arrows are being shot from every possible angle to bring down vernacular or Tamil schools in the country.

As Malaysians, we often take pride in coming from a country rich with diverse cultures.

But until we strive to make Malaysia a nation of growth for each person, we will never know what it means to be truly unified in spirit and soul.

Aside from having a strong financial foundation, moral support, encouragement and respect among Malaysians are greatly needed if Tamil schools were to progress beyond a primary level.

Looking forward to the future, my opinion is that we should do it like Singapore, all races go to the same schools but learning their mother tongue is compulsory. Doing this builds our unity as Malaysians and protects our languages and identify. Unity in diversity. – Alvin Yinab, Engineer