A. Pamnaswaran Grew Up Among Gangsters And Today He Is Malaysia’s Top Cop 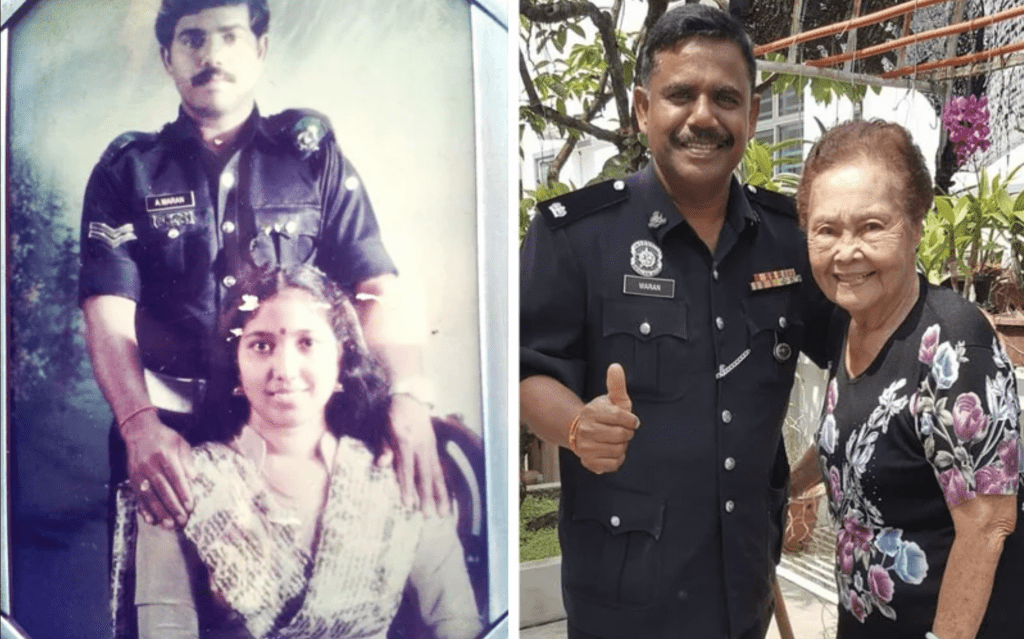 Buntong is a state constituency in Perak and is a suburb of Ipoh. Despite being well known for its cuisine and kacang putih, there was a period when it was once dubbed the “gangster town”. The town has its fair share of stories regarding gangsters roaming around the town’s vicinity and the crimes committed by gang members.

Growing up in an environment with prevalent gangsterism issues isn’t ideal, as a child’s environment plays an essential and crucial part in forming their behaviour[1].

However, although it unfolds as such in many circumstances, it does not apply to a little boy who grew up under challenging conditions.

A.Pamnaswaran, now 60, grew up in Buntong, Perak, a town that is riddled with gangsterism.

His mother worked as a homemaker and his father as a construction worker; they bore eight children together, including himself[2].

As a child, he would lend his mother a hand by selling kuih from one door to the next and would often find himself in a predicament as he was faced by gangster members who were adamant about not paying him after taking his vadai, an Indian fried delicacy[2].

They poked my hand with a cigarette when I asked them to pay. – A.Pamnaswaran, Sungai Siput Deputy Police Chief [2]

However, he hadn’t chosen to fall in the same way of life and instead decided to become a police officer. Pamnaswaran chose a path less travelled by many in Buntong as he grew fatigued from being targeted and bullied by the other children.

But, that was not the sole reason, Pamnaswaran wanted to help his family break loose from the shackles of poverty[2].

Journey To Becoming A Top Cop

Pamnaswaran was a constable since 1983 but then opted to take the Sijil Tinggi Pelajaran Malaysia (STPM)  examination to advance from his position. However, the first three attempts had proven to be unsuccessful.

At the same time, he was working part-time as a gardener at the residence of the Tengku Mahkota of Pahang, Tengku Abdullah Sultan Ahmad Shah (now Sultan Abdullah, and Yang di-Pertuan Agong).

When his fourth chance presented itself and rolled round the corner, he finally managed to pass.

I was helping my family to ease our financial burden. When I was finally promoted to inspector in 1993, I couldn’t sleep for three days because I was overwhelmed with joy – A.Pamnaswaran, Sungai Siput Deputy Police Chief[2]

He was qualified for an inspector position interview, followed by the deputy superintendent[3].

Eventually, throughout his journey and his many trials, he became the deputy district police chief in Sungai Siput.

He wasn’t the sole member of his family who opted to choose this career path. His eldest brother,  A. Thaiveegan became the Penang Police Chief.

His Accomplishments In The Force

Throughout his career, Pamnaswaran had a fair share of high-risk cases that required his skills. However, there was one case that he held dear and gained him the moniker “Tuan Kambing”  (Mr Goat) amongst his colleagues.

In 2013 when a total of 100 goats went missing from the complainant’s farm in Nibong Tebal. They found the suspect selling 30 goats to someone in Taiping[2]. He found and gathered critical evidence during the investigation phase, which led to the suspect’s apprehension[3].

We set up a roadblock and managed to round up the suspect who was ferrying dozens of goats in the lorry. The goats, which were quiet, turned noisy after their owner arrived to check on them. While I got used to meeting criminals, seeing this seemingly mundane occurrence baffled me – A.Pamnaswaran, Sungai Siput Deputy Police Chief[2]

In this way, he managed to serve and bring justice not only to the goats but to the owner as well. Pamnaswaran took his job very seriously, to such an extent that he would regard and look at the victims as family members.

As a policeman, you must spend time with the complainant. You must put your heart and soul into it, and be professional.  – A.Pamnaswaran, Sungai Siput Deputy Police Chief[2]

Perak and Its Gang Activities, Where Does It Stand?

Although there was a point when it was dubbed as a town which was very much inflicted with gangsterism and similar activities, there was a sign of change and improvement.

In 2020, it was reported Perak was among the states in which the crime rates diminished over the past couple of years[4].

The crime rate especially gangsterism has dropped and is a positive sign from the community safety point of view. While the crime rate had dropped and is under control in Buntong, we still have to tackle drug abuse and will continue to carry out operations with the cooperation of Rukun Tetangga (RT) teams and other NGOs  – DSP Ng Bo Huat, Perak Crime Prevention and Community Policing department officer[5].

Despite the promising changes, A. Pamnaswaran believes there’s more to be done to combat gangsterism not just in Perak but nationwide.

If we don’t help the kids, they would only perpetuate the culture of gangsterism as that’s often seen as the easy way out – A.Pamnaswaran, Sungai Siput Deputy Police Chief[2]

Although the reason behind A. Pamnaswaran becoming a cop was to catapult his family from poverty and to stop being bullied by the neighbourhood children, he has a larger mission to pursue.  A. Pamnaswaran hopes to curb crimes unfolding in the country and made it his mission to ensure the youth and the next generation wouldn’t wind up following an unfortunate path during their lives.