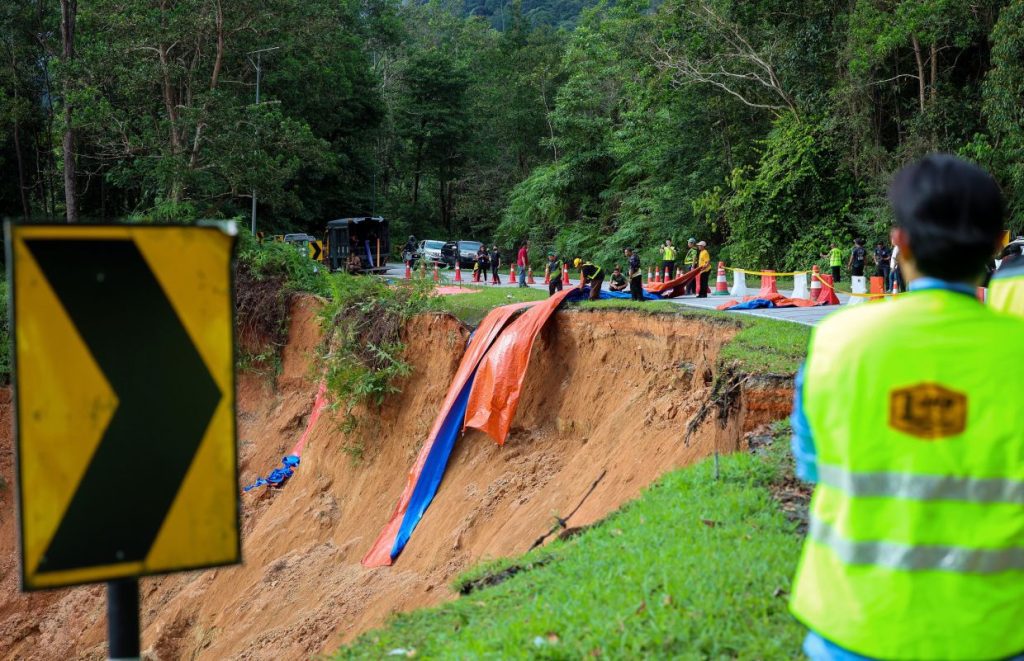 On Friday, December 16th 2022, a section of slope (about 70m high, 120m wide and 330m long) along B66 Seksyen 13.0 Jalan Batang Kali-Genting Highlands came crashing onto Father’s Organic Farm campsite[1], affecting an area of over 500 metres long, 200 metres wide and eight metres deep[2]. What happened is one of the most tragic disasters of the year, with 31 lives claimed and a total of 61 survivors[3].

As we continue to grieve over the families and friends lost to this tragedy and as the culprit of the incident is being determined, let’s remind ourselves of previous landslide disasters that shook our nation and learn from their mistakes.

With our constant heavy rainfall that can occur daily, it is no surprise that landslides are a common and frequent threat in Malaysia. Indeed, Malaysia sits among the top 10 countries with a high number of landslides over the past decade[4]. In 2011, Malaysia experienced an average of about 100 landslides annually[5]. The death toll caused by these disasters has been 600 since 1961[6].

A landslide is a downward movement of rock, earth, or debris moving down a slope influenced by gravity. Landslides are commonly caused by disturbances in the natural stability of slope (in Malaysia specifically), it usually occurs following periods of heavy rainfall[7] that can result in high soil saturation and pressure from the accumulation of underground water[3].

Numerous factors contribute to the likelihood of landslides occurring as well as their severity:

The Klang Valley is considered to be one of the most landslide-prone areas in Malaysia, especially at Hulu Kelang, Kuala Lumpur, which has been frequented by landslides since the 1990s. The Star newspapers noted that Sabah recorded the highest number of landslides over the years at 42, followed by Kuala Lumpur (26), Sarawak (25), Selangor (22) and Penang (14)[8].

The Batang-Kali disaster was the latest and worst landslide out of 23 that occurred in 2022[2]. And it will most certainly go down in history as one of the worst landslides in Malaysia. As such, we must go back in time and learn more about some of the country’s worst landslides to learn how to prevent such disasters from happening.

December 11th 1993 marks the date of one of the most tragic disasters in Malaysian history. It was on that day that one of the three blocks of Highland Towers collapsed and took the lives of many, shocking the entire nation[9].

Built on a steeply sloped terraced hill between 1975 and 1978 at Taman Hillview, Ulu Klang Selangor, the Highland Towers consisted of three blocks 12 story high apartments, named Block 1, 2, and 3 respectively, and served affluent middle-class families, most of whom were expatriates[10].

These families would experience true horror when at 1:30 pm on December 11th 1993, following 10 days of torrential rain, Block 1 collapsed, burying the building’s occupants under tons of debris. Over 500 rescue workers, including from Singapore, Japan, France, the UK and the USA, worked around the clock in a desperate race against time to find survivors, despite safety concerns over the stability of the two other towers. Unfortunately, over the first 24 hours, only three survivors were pulled out of the rubble[10].

Indonesians Umi Rasyidah Koiruman, 22 and her toddler Nur Hamidah Nadjib survived the ordeal. But Japanese national Shizue Nakajima, 50, succumbed to her injuries. Subsequently, on December 17th, the search for survivors ended at 3 pm and no signs of remaining survivors were detected, it became a search for bodies. This search ended on December 22nd after 48 bodies were recovered[10].

It’s not something that ex-residents like me can talk about easily, even today. It was devastating that a tragedy like this had happened to us. I was playing video games at a friend’s apartment in Block 2 when we heard a loud bang. We rushed to his balcony, which faced the hillside, and when I saw the landslide rushing towards my block, my heart sank. – Zhariff Afandi, a former resident of Block 1[11]

Long before the land was developed, there was a stream, Sungai Timur nearby, the Highland Towers site.  Despite its size, water from the stream kept flowing into the towers’ construction site, prompting the construction of a pipe system built to divert water from making its way to the site[9].

The construction of the Bukit Antarabangsa Development Project in 1991 would only lead to things getting worse. Development for the project led to a massive clearing of trees and ground cover, exposing the underlying soil to rainwater erosion. The new construction site also had a problem with water seeping into it, necessitating the construction of a new pipe system to divert the water into the previous pipe system used for the Highland Towers[10].

As you can imagine, this also meant that the old pipe system was getting overloaded with water (as well as sand and silt) from the construction site. In December 1993, following 10 days of torrential rainfall, the pipes burst at several locations around the hill, causing the ground to give way. An estimated 100,000 square metres of mud slides downhill, destroying retaining walls around Block 1 and subsequently weakening the tower’s foundation which led to its collapse[10].

The building was gliding, there was a low snapping noise and it just collapsed. – Bruce Erin Mitchell, an American Marine pilot who was a resident of Block 3[9]

In the aftermath of the disaster, the Malaysian government declared it a national tragedy. On December 20, 1993, the government decided to freeze the approval of new hillside developments in the area, although that temporary ban was lifted on June 23, 1994. While there were plans to fix Block 2 and Block 3, further inspections showed that they were structurally unstable[10].

Since then, the remaining two towers were left abandoned, overgrown with vegetation and falling victim to vandals, drug addicts and other criminal elements. Even the memorial stone erected in memory of the victims was not safe from irresponsible wrongdoings[9].

What makes me angry is whenever I see hill slopes still being cleared in an improper manner, because of pure greed.  Local developers have not learned from the incidents of slope failures near hillside developments.

My plea to property developers is to please adhere to government guidelines on construction on slopes. Cutting corners for profit could lead to another tragedy like Highland Towers. – Dr Iain Gray, chief foreign architect and master planner with the South China Architectural Design & Research Institute in Guangzhou City and a former Block 3 resident[11]

On May 21st 2011, 20 orphanage children and their five caretakers were taking part in an event in a tent at the Hidayah Madrasah al-Taqwa orphanage in the district of Hulu Langat when they were suddenly buried by two landslides, within seconds of each other[12].

I heard a loud noise. Suddenly the earth was chasing me. I had to run to save myself. – Mohamad Hambali Ismail, a warden at the Hidayah Madrasah al-Taqwa orphanage[12]

Rescuers dug through 14 feet (4m) of sludge to find victims and the last body was retrieved nearly 15 hours after the landslides. The landslide claimed the lives of 16 people – 15 boys, aged between eight and 18 and a 34-year-old caretaker at the orphanage[12].

Tourism, Consumer Affairs and Environment Committee chairman Elizabeth Wong (PKR-Bukit Lanjan) blames this disaster on human activities, citing construction activities that include clearing vegetation, cutting the slope too steep and doing nothing to strengthen it[13].

Furthermore, there was an absence of a buffer zone and maintenance zone. – Tourism, Consumer Affairs and Environment Committee chairman Elizabeth Wong (PKR-Bukit Lanjan) replying to a question from Dr Shafie Abu Bakar (PAS-Bangi)[13]

Following the Hulu Langat landslide tragedy, the council conducted check-ups in high-risk areas, near slopes with a gradient of more than 25 degrees, urging owners of buildings without a Certificate of Fitness (CF) to submit building plans[14].

It will take us two weeks to conduct our checks and we will give them three months to apply for a CF. If they still fail to do so, then they will have to bear the consequences if there happen to be any calamities. – Datuk Hassan Nawawi Abdul Rahman, then council president[14]

Indeed, many case studies have highlighted the link between landslides and the mass removal of trees and vegetation. Heavy machinery used in logging has damaged precious topsoil and decreased its ability to absorb water, while logging slash (leftover tree limbs) and debris will block natural drainage basins. The removal of forest vegetation has exposed the delicate root systems that eventually die off, leaving the soil vulnerable to oversaturation[15].

I don’t see this as climate change. I see this as a continuing disregard for the most basic ‘mitigation’ action any country with high rainfall must take very seriously.

Under the canopy cover, rain doesn’t loosen and move soil. Roots additionally hold soils firm. Only when we adapt our development practices, our catchment policies, our forest cover policies and our forest conversion policies, can we bring such disasters to a halt. And halting them isn’t rocket science! – Anthony Sebastian of the Forest Stewardship Council (FSC) international board of directors[15]

Anthony Sebastian, a member of the Forest Stewardship Council (FSC) international board of directors, adds that forests play an important role in reducing landslide risk through various mechanisms. Large trees provide strong root structures that penetrate fragile cracks in the underlying bedrock and help anchor the soil. The forest also creates a canopy of foliage that helps dissipate rainfall over large areas.

Tying climate change to the landslide tragedy requires extensive scientific analysis. But what appears to be more worrying is the seeming lack of monitoring of hill slope development and landslide-prone areas. – Environmentalist Gurmit Singh[15]

Although the National Slope Master Plan by the Public Works Department, which provides a comprehensive and effective framework of national policies, strategies and action plans to reduce the risks and losses from landslides, has been in existence since 2009, the recent tragedies show that we still remain woefully unprepared to prevent or even mitigate such disasters[15].

Landslides are truly tragic disasters. But what can we, as Malaysian citizens, do to prepare for such things and to better avoid them?

Looking Out For Landslides

Following the tragedy at Batang Kali, it has become more important now than ever that we look out for signs of landslides and places susceptible to them. Follow these steps from the United States Geological Society in order to better prepare yourselves against landslides.

Pay Attention To The Warning Signs:

Areas that are generally prone to landslide hazards:

What To Do Before a Landslide:

What To Do During A Landslide

What to Do if You Suspect Imminent Landslide Danger

What To Do After Landslide

6 Horrible Realities Faced By Unwed Mothers And Their Children In Malaysia
Daylight Scams: Bogus Health Products A Big Hit Among Malaysians
ESG Uptake, Increase In Eco-tourism And Other Environmental And Sustainability Trends In 2023
5 Subtle Ways Climate Change Can Affect Your Finances
9 Malaysian Who Don’t Mince Their Words And Fights For Those Who Can’t
Malaysians Want To Use Playgrounds, Parks and Recreational Areas, But Who Takes Care Of Them?
7 Things You Need To Know About The New UN Biodiversity Agreement Signed By 190 Countries
Good News: A Gift Of A Healthy Heart And Five More Hopeful Stories
The Golden Era of Cameron Highlands Is Over Because Of Climate Change 
Does Malaysia Need To Declare A Climate Emergency?