8 Talented Malaysian Indigenous Artists The World Should Know About 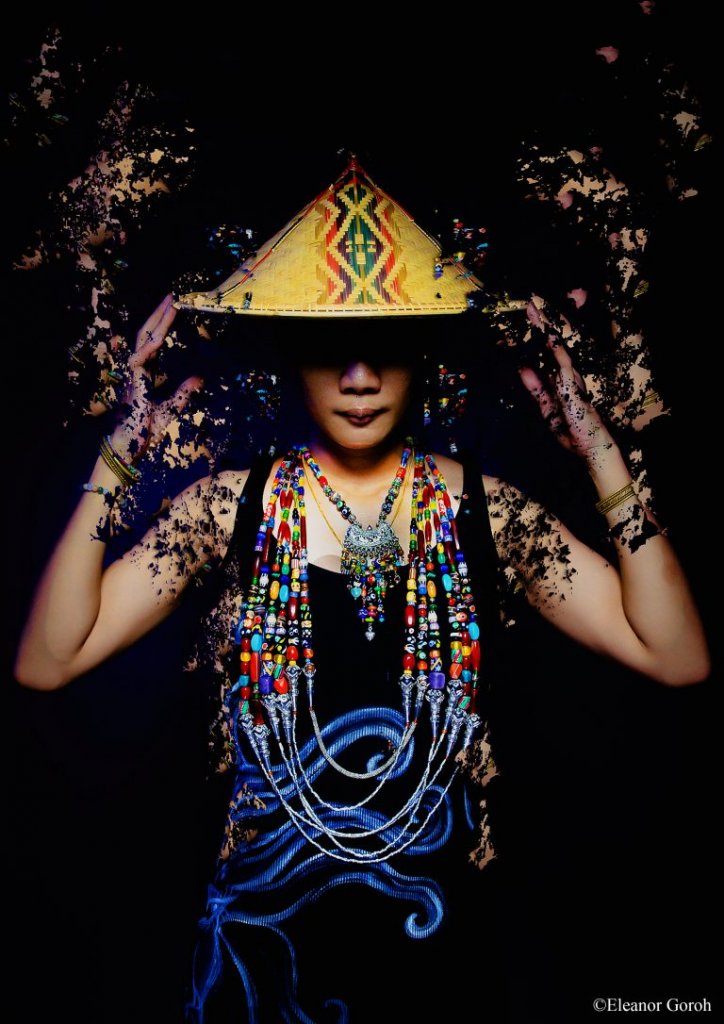 Malaysia is a land of diverse and rich cultures that make our nation unique and one-of-a-kind. The Orang Asli in Peninsular Malaysia is made up of 18 tribes and over 50 different indigenous ethnic groups reside in Sabah and Sarawak. Some of these indigenous communities continue to live in rural areas, while others have assimilated into modern life and urban living.

Nonetheless, the diverse cultural make-up of Malaysia owes much of its credit to our indigenous and native people groups. And one of the ways to keep this heritage intact is through the arts. The beauty of Indigenous art is found in the creators’ deep connection to the land, community and culture.

Join us in celebrating Malaysian indigenous artists and find out how you can support their work so that our nation’s cultural diversity lives on.

Temuan indigenous artist Leny Maknoh’s passion for art began when she was just six. Growing up, her reverence for art grew as she progressed at different stages. First colouring, then tracing, and now sketching. Despite her talent, Leny took an eight-year-long detour to become a music and science teacher. During that time, she craved and longed to get back into art.

Today, Leny is a renowned sketch artist, as her sketches depict realism, reflecting her Temuan tribe and its culture.

I draw anything that catches my eye, but I mostly draw portraits of indigenous people. Indigenous people are very close to nature. Therefore, I sometimes add leaves, flowers, insects, and animals to the portrait. – Leny Maknoh, Temuan indigenous artist[1]

Her works of art are often inspired by her roots – an isolated village in Negeri Sembilan called Kampung Guntur. The Temuan tribe are a Proto-Malay ethnic group, often residing in Selangor, Pahang, Johor, Negeri Sembilan and Malacca. They are among the largest Orang Asli ethnic groups in the country.  According to Leny, she uses art to bridge the isolation of her kampung and the modern world.

In every piece of artwork we create, each has its own story about our people, history, traditions and culture. There’s a bright future for indigenousart and artists if we preserve our traditions. – Leny Maknoh, Temuan indigenous artist[2]

Shahar Koyok, better known as Shaq Koyok is an activist and award-winning artist who paints and weaves. He hails from Pulau Kempas, Banting, and grew up in a deep-rooted Orang Asli (OA) setting. Shaq bagged the Merdeka Award Grant for International Attachment (2017), Indigenous People Icon Award and the indigenous People Excellence Award by Tourism Selangor in 2015.

His works of art are a fusion of activism and arts representing the OA community. He’s a familiar face at protests, always seeking justice for his fellow OAs.

My paintings reflect my people and the rainforest in which I grew up and show the importance of nature to the Orang Asal. The presentation of my artworks also captures a contemporary view of such struggle faced by Malaysia’s indigenous people, which contributes to a deeper understanding of a multiracial Malaysia. – Shaq Koyok, Indigenous activist and artist[3]

Growing up, developers would buy up and destroy the land. When this happens, the plight of the OA was constantly ignored. These remained Shaq’s prime motivations. He admits that the legacy that once was will be quick to remain history if nobody knew about them.

It is almost as if our identity is hidden, our history is hardly taught in schools. – Shaq Koyok, Indigenous activist and artist[4]

He recalls the days when finding food after school meant having to fish. To earn extra cash, he sold vegetables at a local market.

After school, I used to find our lunch in the jungle. I used to go fish in the stream and search for vegetables. Having a lot of siblings meant it was tougher to find enough food. To get to school we need to take the bus and we needed money. I got creative and sold extra vegetables in the market for cash. – Shaq Koyok, Indigenous activist and artist[4]

And today, his art masterpieces ground his identity as he makes a living.

Art is not just a rigid picture, it is a moving conversation. – Shaq Koyok,  Indigenous activist and artist[4]

69-year-old Mahat China aka Akiya, is an indigenous writer and poet of the Semai descent from Kampung Erong, Ladang Ulu Bernam, Hilir Perak. Mahat grew up in a generation where Orang Asli practices and livelihood were still intact. As a child, Mahat worked in rubber fields and collected ratan – products that helped the Semai community survive economically.

His storytelling abilities came from his mother. She was known as a cemor expert – an oral storytelling session among the Semai Orang Asli community.  In his teen years, he piqued an interest in literature and reading. He realised that when outsiders – those not from the community, told the OA’s story, it was a far cry from their reality. Mahat then decided to be a voice for his own people.

Some of his work includes novels such as Perang Sangkil (The slave raiders war) and Hamba (Slave), and a poetry collection titled ‘Suara dari Dalam’(The voice from within)[3].

World-renowned Borneo musician Alena Murang has preserved her Dayak- Kelabit heritage in ways unimagined. Growing up in a mixed household – Borneo-Dayak-European, Alena has always stayed true to her roots. The Kelabit tribe is one of the smallest ethnic groups in Sarawak.

Alena uses the sape’- a traditional flute instrument to tell melodic tales of her culture and heritage. As a child, Alena was surrounded by a musically inclined family where song and dance were a constant. She learned traditional Sarawakian dances from her aunties.

As native people, our identity is tied to our land. Our songs are about land, our stories are about our land, and we know who planted what fruit trees three generations ago. It’s so important for us. – Alena Murang, Borneo sape’ artist[5]

In 2000, Alena picked up the sape’ instrument along with several other girls – Anak Adi’ Rurum Kelabit. In 2007, they debuted an album. In her 20s, Alena sought to inherit the songs of her tribe. Along the way, she received wisdom and teachings in dance, songs and music. Her talent may come as a surprise to many, as she never formally studied music.

When I started playing the sape, almost no one was learning it. Even from my dad’s generation, hardly anyone was playing it. – Alena Murang, Borneo sape’ artist[6]

Her works are recognised globally, having been invited to perform in countries such as the USA, Czech Republic, France, Germany, and Australia. Just last year, her song ‘Warrior Spirit’ bagged double awards at the International Music Video Awards (IMVA) in the UK.  Make sure to check out the rest of her work here!

From Miri, Sarawak, we have Brandon Ritom – an exceptional portrait and landscape artist.  He specialises in figurative and plein air landscape painting. Other than exploring local cultures, Brandon aims to explore global indigenous cultures through his art. For instance, the indigenous background of Kurentovanje, Slovenia.

Locally, his art is no stranger to art exhibitions. With his heritage linking back to Iban and Bidayuh roots, he doesn’t plan on stopping anytime soon. Instead, Brandon is determined to carve a path for the Orang Asli community.

The beauty of his art doesn’t come easy, as a single portrait sometimes takes at least three hours to paint. This Dayak descent artist’s art has been featured locally, where he showcased a series of his artwork at the Centre for Malaysian Indigenous Studies (CIMS) in Kuala Lumpur[7].

With East Malaysian creatives, we are often shoehorned into very narrow categories. Like you always have to be culturally aware, and always have to dress up. There are a lot of ‘exoticising’ elements that go on, and certain perceptions towards us. But I hope this helps with our visibility: show people that we are around, and we have our own stories to tell. – Brandon Ritom, Sarawakian indigenous artist[8]

Aside from being a full-time senior lecturer at Tunku Abdul Rahman University College (TARUC) in Setapak, Kendy Mitot is a Sarawakian artist from the Bidayuh tribe. He wears many hats as an artist – educator, cultural researcher, visual arts practitioner and writer.

Whatever our religion, we are Bidayuh and this is our tradition. – Kendy Mitot, indigenous Sarawakian artist[9]

The ancient Bidayuh tribe were more commonly pagans and animists – believing in nature and ancestral spirits. Although times are different now, the process and traditions involved in said believers are rich and still performed. Hence, the need to preserve such a rich history.

As an artist, educator and researcher, I look for creative ways to document, preserve and educate people, especially the younger generation, about our culture –  Kendy Mitot, indigenous Sarawakian artist[9]

One of Kendy’s most prominent works close to home was in 2017, displayed at the Galeri Petronas, Suria KLCC in Kuala Lumpur. Paint, charcoal, dry wood and leaves- elements found easily back home in Kuching, were used for his piece-  Bilayar Simonggi l’eng D’e Piobuo (The last voyage of the souls/spirits).

Cultural enthusiast Eleanor Barbara D.Goroh tells her story by using vibrant beads. She belongs to the Dusun community in Sabah, originating from Kampung Pinasang Tamu Darat. In 2010, Eleanor discovered that beads were part of her indigenous heritage. Her knowledge birthed a hobby that evolved into a full-time job.

I learned that beads are part of our indigenous heritage. Just like our land, territories and resources, beads bring distinct meanings to each tribe and we share common favourites – the Agit (carnelian), blue-green healing glass, orange mutisalah, and polychrome glass beads. – Eleanor Goroh, indigenous beader and cultural enthusiast[10]

She then established Magic Borneo Beads, a space showcasing her designs and keeping up with her journey.

Magic Borneo Beads was set up as I wanted to keep a journal of my spiritual journey learning about the cultures and traditions of our land and people. This journey continues as my beads open new pathways venturing into new things and new chapters of my life. – Eleanor Goroh, indigenous beader and cultural enthusiast[10]

Eleanor’s beadwork has been featured around the globe, some of which include the Georgetown  Literary Festival (GTLF) Penang, Circus Charivari, Berlin, Germany and the  Open-Eye Festival, Bremgarten, Switzerland[10]

We actually only started this project in  2013 as research. In 2014 I started the community-based project with seven weavers. We also have a lot of young weavers learning together with their mothers and grandmothers. – Welyne Jeffrey Jehom, Rh Gareh Pua Kumbu founder and indigenous artist[11]

These hand-made textiles which sometimes take months to complete have been showcased in Kuala Lumpur, Paris, Penang and Kuching.