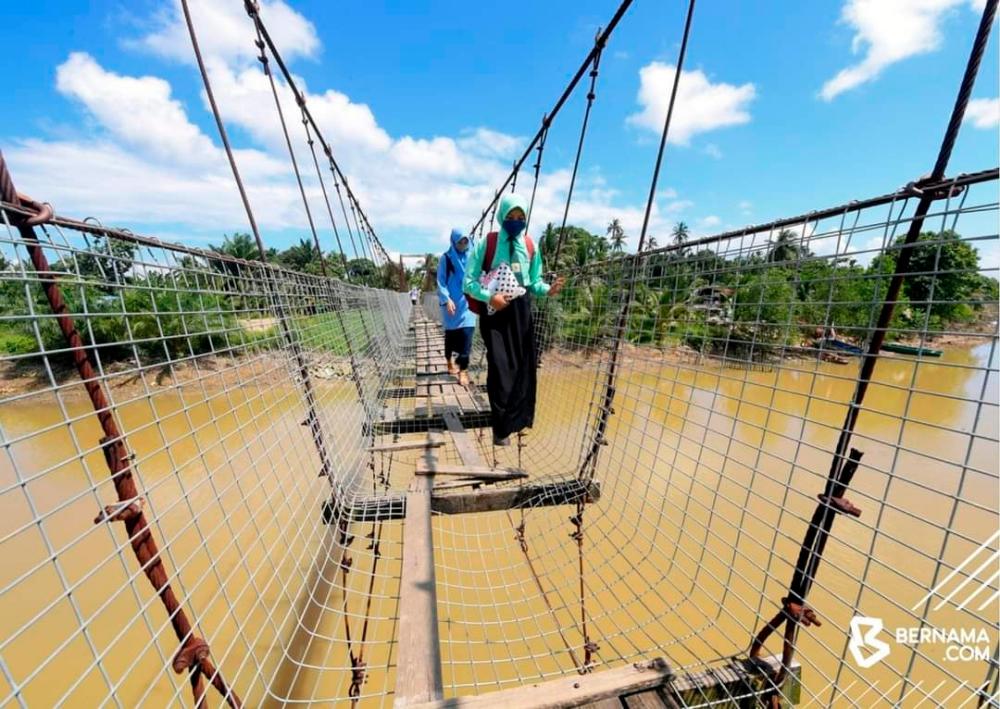 To many of us, going to school involves a journey on the bus or a van or by car. Sometimes we are blessed to live within the vicinity of our schools, allowing us to walk to school with our friends or cycle to school.

In 2022, school bus fare in Penang depending on the location is within the range of RM100 to RM200[1]. The cost may be higher in different cities, and according to the United Nations, an increase of RM1 in education-related costs is enough to dissuade lower-income families from sending their children to school[2].

Many in the interior parts of Malaysia where travelling to attend school requires a journey that may take hours and involves putting themselves at risk. This is due to the long distance from their homes to school.

For example, in Tongod, Sabah, 58.2% of primary and secondary schools are situated over 9km away from their homes. A distance that is 4 times the distance of travelling to schools in Sabah[3].

Our distance from the school map found many schools in East Malaysia that exceed the 9km distance and in one of the poorest areas in Malaysia in Lojing, Kelantan – the same story is observed.

Map Notes: This map is based on distance to school released by the Department of Statistics Malaysia in their Household Income & Basic Amenities Survey Report 2019 Credit: Map visualised by Bryan Choi

However, the school bus and van facilities available to many of us in more urban parts of Malaysia are inaccessible to many in the rural areas due to the terrains that involve muddy roads and precarious bridges.

We have compiled the many life-threatening ways Malaysian students go to school, shedding light on the community’s great perseverance in ensuring their youth would not be left behind. It also serves as a closer inspection of what needs to change in infrastructure to ensure no school dropouts among the marginalised communities.

In April 2022, the students in Kampung Nangkawangan, Nabawan in Sabah reportedly had to rely on makeshift rafts or use a zip line to go to school following the suspension bridge that the villages had once used washed away a month ago[4].

A video shot by a villager and uploaded on social media shows children clad in school uniforms rowing their makeshift rafts to get to the other side of the river. When the water level rises or the currents are strong, the alternative is the zip line. Children were placed in a sawn-off oil barrel and sent from one end to another.

It may feel like it’s fun to cross the river on a zip line but it is dangerous, especially for children, without the proper safety precautions. But they are so eager to learn that they have to go through all this. Going on a raft, zip line. Where are the boats? – Zazila Roslan, Kampung Nangkawangan spokesperson[4]

Cikgu, on TV we saw children going to school riding a bus, why do we have to ride a truck? – Students in Kampung Tungau, Kuala Lipis, Pahang[5]

Because the road here is not suitable for a bus, you know our road is bad. Buses are not durable, lorries are. – Ameer Firdaus, a teacher in SK Lenjang, Kuala Lipis Pahang[5]

The children in Kuala Lipis, Pahang get ready as early as 5.30am and wait for the lorry or as the students would like to believe “bus” arriving at 6.00am. The “bus” picked up the children from neighbouring villages nearby SK Lenjang and blazed through the roads when the sky was still dark without fail.

Students’ of Ameer Firdaus, a teacher at SK Lenjang, documented the journey of his students from Kampung Tungau with their mothers waving good-byes to their children. When there are younger students in Standard 1 and 2, the lorry driver, Faizal, would lift them into the lorry.

In late 2020, a social media post originating from Kota Marudu highlighted that more than 30 students in Kampung Muhang’s daily trip to school and kindergarten requires them to cross the river via piping[6].

Some of the students were wearing their school uniforms, and some in fear of getting their clothes dirty, placed them in plastic bags. The younger ones are piggy-backed and guided by adults to ensure their safety.

The bridge is old, if it is not repaired or replaced with a new one, it can collapse at any time. The same goes for the pipe. When it gets tilted, the lives of the villagers will be at-risk. – Muruni, a homemaker in Kampung Muhang[7]

Since the news surfaced, the authorities promised an upgraded concrete bridge would be in place. The old bridge the villagers relied on is often submerged after bouts of heavy rainfall[8].

Even when water rises and their homes are being flooded, the students in Sekolah Kebangsaan (SK) Sungai Kerawai in Teluk Intan, Perak were not stopped from attending school.

The floodwater originating from an overflowing river caused road closures leaving students stranded in school. The affected students rode on a lorry provided by Angkatan Pertahanan Awam Malaysia (APM) and a tractor on their way home[9].

#5: Trekking Through The Jungle

It’s unimaginable to many of us to wake up early and walk through the jungle as early as 6 am every day to get to school. But that’s the life of many in the rural parts of Sabah and Sarawak. At least 20 students in Kampung Tiku, Papar walk an hour each day to get to school, often barefoot on their journey and only donning their shoes once they arrive at their school in the neighbouring village of Buayan[10].

This was also the case for a 12-year-old boy in Penampang, Sabah – Ayon. Hearing his plight, his former primary school teacher, Fera, helped him, but Ayon would have to find his own means of transport[11].

But, there was another hurdle for Ayon as he had to travel 14km by foot through muddy roads, slopes and a peak to trek up. Once Fera found out Ayon had set off, she drove to search for the boy who was three hours into his hike carrying his backpack on his back and torso[11].

In 2017, three siblings were seen riding on a bicycle with their father’s friend, Encik Ali in Kedah. On a fateful day, their father, Rasaluddin, was unable to send them to school due to his car needing repair. That did not stop the father from ensuring his children would attend school, his daughters were placed at the back of the bicycle while his son sat at the front of the bicycle[12].

The students in Sekolah Kebangsaan Sibugal Besar in Sandakan, Sabah have to cross the Seguntor River and the only way to cross the river is by using a suspended hanging bridge connecting Kampung Nelayan to the other side of the river. The suspension bridge is worse for wear, risking the children’s possible danger of falling, drowning and crocodile attacks[13].

With the issue going viral on social media, the bridge was temporarily closed and the villagers held a gotong-royong to replace the wooden planks and repair the bridge[14].

Now and then, the news of children in East Malaysia crossing the river with small boats. The students placed themselves at risk of crocodile attacks and unpredictable currents, especially after a heavy downpour. Recently, the children in Pitas, Sabah – one of the poorest districts in Malaysia relied on perahu (small boats) to cross the Bengkoka River, some weren’t wearing life jackets[15].

At least 58 children braved this RM 2 journey after the hanging bridge that connects five villages to Kampung Dandun where the school is located was destroyed after massive flooding in January 2022. But, there have been previous cases such as the one in Kg Pituru and Kg Timbang Taun that was solved after the goodwill of a non-governmental organisation donating two fibre boats to the villagers.