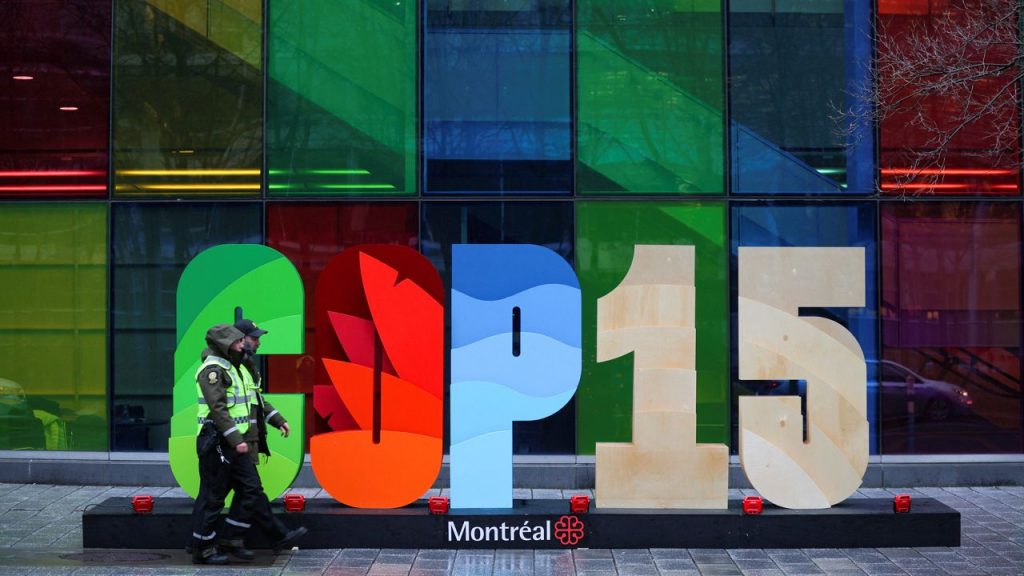 On 7-19 December 2022, the UN Biodiversity Conference (Fifteenth meeting of the Conference of the Parties (COP15) to the Convention on Biological Diversity (CBD)) took place in Montreal, Canada. Governments from around the world came together to agree on a new set of goals to guide global action through 2030 to halt and reverse nature loss.

With surmounting pressure to protect our planet’s fragile ecosystems and biodiversity from the threat of unchecked human activities and climate change to meet the Sustainable Development Goals (SDG), COP-15 aims to introduce a global biodiversity framework that addresses the key drivers of nature loss. This agreement, signed by more than 190 countries, represents a landmark in biodiversity protection and ecosystem restoration lauded by many.

However, it also has more than a few detractors who feel that the guidelines created by the agreement still fall short.

But how exactly does this historic agreement apply to the average citizen?

Here are some key takeaways from COP15:

The “Kunming-Montreal Global Biodiversity Framework” (GBF) presents 23 targets for achievement by 2030. Chief among these targets is the effective conservation and management of at least 30% of the world’s lands, inland waters, coastal areas and oceans, emphasising areas of particular importance for biodiversity and ecosystem functioning and services.

The GBF prioritises ecologically-representative, well-connected and equitably-governed systems of protected areas and other effective area-based conservation, recognizing indigenous and traditional territories and practices. Currently, 17% and 10% of the world’s terrestrial and marine regions respectively are under protection[1].

The ’30×30’ target marks the largest land and ocean conservation commitment in history. It will have major positive impacts for wildlife, for addressing climate change, and for securing the services that nature provides to people, including clean water and pollination for crops. – Brian O’Donnell, director of the Campaign for Nature[2]

#2: All About Biodiversity To Keep The Earth Healthy

COP15 recognizes the value that biodiversity provides to our planet. Biodiversity is what drives our ecosystems, from the oceans to the forests. It is the basis of the Earth’s food systems, provides fresh water, sustains the quality of the air and soils, regulates the climate, provides pollination and pest control, absorbs carbon emissions and reduces the impact of natural hazards[3].

Nature is also key to achieving Net Zero and provides solutions that enable us to better understand the challenges we face due to a changing climate (e.g. drought, land use, and food security)[4]. Unfortunately, nature has already reached a tipping point with a million species of plant, animal and fungi being threatened with extinction[5]. Some scientists even said that we are currently experiencing a Sixth Mass Extinction driven entirely by human activities.

The Four Overarching Global Goals of the GBF are designed to combat threats and restore biodiversity. The Goals seek to ensure that the integrity, connectivity and resilience of existing ecosystems are maintained, enhanced, or restored, substantially increasing the area of natural ecosystems by 2050, reducing the extinction rate and risk of all species by tenfold and halting human-induced extinction of known threatened species[1].

The goals also seek to ensure that biodiversity is sustainably used and managed, nature’s contributions to people (including ecosystem functions and services) are valued, maintained and enhanced, with those currently in decline being restored, and supporting the achievement of sustainable development, for the benefit of present and future generations by 2050[1].

Finance played a key role at COP15, with discussions centred on how much money developed countries will send to developing countries to address biodiversity loss. A Special Trust Fund set up by the Global Environment Facility was requested to be put in place to support the implementation of the GBF, to ensure an adequate, predictable and timely flow of funds.

As part of its 23 Targets, the GBF aims to earn at least $200 billion per year in domestic and international biodiversity-related funding from all sources – public and private by 2030. It will also raise international financial flows from developed to developing countries, in particular, least developed countries, small island developing States, and countries with economies in transition, to at least US$ 30 billion per year by 2030[1].

Countries also approved a series of related agreements to implement the GBF, including planning, monitoring, reporting and review to ensure that there is not “a further acceleration in the global rate of species extinction, which is already at least tens to hundreds of times higher than it has averaged over the past 10 million years.”[7]

#4: COP15 Is Different To COP27 But There Are Similarities

COP27 was held in November in the Egyptian resort of Sharm el-Sheikh and produced a mixed set of results. This included a landmark deal to provide “loss and damage” funding that will see rich nations pay poorer countries for damage and economic losses caused by climate change. However, critics say COP27 isn’t going as far or fast enough in cutting greenhouse gas emissions[3].

It did, however, acknowledge the link between climate change and biodiversity loss. Indeed, COP27’s final agreement included a cover decision – known as the Sharm el-Sheikh Implementation Plan – that included, for the first time, dedicated sections on oceans, forests and agriculture, demonstrating a recognition of the link between protecting nature and climate change[3].

#5: Lofty Ambitions, But A Past Of Falling Short

Though COP15’s new frameworks and guidelines were lauded, with much-expressing optimism towards them, there was also a fair share of detractors who worry that these goals may be too ambitious for their good.

It can be undermined by slow implementation and failure to mobilise the promised resources. – Marco Lambertini, director general of WWF International[2]

The new framework “is the equivalent of simply agreeing on the ‘to-do list’ — now the hard work must begin to ensure it gets done,” said Terry Townshend, a Beijing-based fellow for the Paulson Institute, which had previously estimated the annual shortfall in biodiversity funding to be around $700 billion[8].

Perhaps these fears are not wholly unjustified; the last time around, countries failed to fully achieve any of the targets in the previous 10-year agreement and only partially achieved six by 2020. The failures prompted some to question whether it was even worth setting more ambitious targets this time around[8].

Some complained the past targets were too vague, while others cited the delays of several years in setting up a reporting mechanism. There was also much less money in that deal[7].

COP15 sought to rectify this issue by giving clearer and more precise targets that cover a wider array of issues affecting biodiversity, including pollution, invasive species and pesticides[8].

There is also clearer language for protecting the rights of indigenous communities who have an outsized role in protecting the world’s biodiversity but have often been overlooked and, in some cases, even forced from the lands in the name of conservation.

It “has the potential to usher in a new paradigm for conservation, one in which indigenous peoples’ and local communities’ rights are upheld and where they are recognized for the leadership they have provided,” said O’Donnell[2].

At this point, there is a global conversation happening,” Andersen said. “I would say the difference between these 12 years is that there is a broader societal engagement. Some countries will lean in and will get closer to those targets that we’ve now set, some will surpass them. Others may not. – Inger Andersen, UN Environment Program Executive Director[8]

#6: Commitments Declared Only On Paper To Some

Among the criticisms levied against the agreement is its lack of quantifiable pledges centred around reducing production and consumption, which are key drivers of biodiversity loss[2].

The agreement is not legally binding. Countries have agreed to a monitoring framework to evaluate progress but, “no binding commitments are making the whole mechanism look weak,” Imma Oliveras Menor, senior researcher at Environmental Change Institute, University of Oxford, told the Science Media Centre in London[2].

Some environmental groups have also expressed worries that big business had taken the conference hostage and that the language related to corporations was little more than “greenwashing.”[8]

The text does not stipulate any regulation on corporations and instead promotes greenwashing measures such as ‘Nature-Based Solutions,’ which allow for offsetting environmental destruction. – Nele Marien, Friends of the Earth International’s forests & biodiversity coordinator[8]

Others have stated that the agreements fell short of setting up a strong system of monitoring a country’s progress, meaning that it will be the responsibility of credible, independent third parties to measure progress[8].

Countries’ failure to set robust systems in place for monitoring progress on the biodiversity targets is one notable weakness in the outcome. Monitoring progress with robust, credible systems is critical to ensuring that countries’ actions are delivering the intended impact and unlocking finance for nature-based solutions. – Craig Hanson, managing director for programs for the nonprofit World Resources Institute[8]

Regardless, others have remained optimistic about the agreement, praising the language in the document covering the private sector. It calls for legal and administrative policies that enable businesses, especially larger and transnational companies, to “regularly monitor, assess, and transparently disclose their risks, dependencies and impacts on biodiversity.”

The target on corporate disclosure of biodiversity risk also sends a powerful signal to the private sector that it must adjust its business models and investment strategies towards a nature-positive economy. – Terry Townshend, a Beijing-based fellow for the Paulson Institute[8]

Kaddu Sebunya, CEO of the African Wildlife Foundation, also praised the frameworks given, saying that the new agreement “provides a basis for many of the changes we need in conservation, especially in the way conservation is financed.”[8]

Nearly a third of the world’s biodiversity exists in Africa, although “Africa receives less than 4% of global biodiversity financing,” Sebunya said. That needs to be changed,” he said, adding that the new framework could help jumpstart the change[8].

6 Horrible Realities Faced By Unwed Mothers And Their Children In Malaysia
Daylight Scams: Bogus Health Products A Big Hit Among Malaysians
ESG Uptake, Increase In Eco-tourism And Other Environmental And Sustainability Trends In 2023
5 Subtle Ways Climate Change Can Affect Your Finances
9 Malaysian Who Don’t Mince Their Words And Fights For Those Who Can’t
Malaysians Want To Use Playgrounds, Parks and Recreational Areas, But Who Takes Care Of Them?
A Muddy Mess That Can Turn Fatal - The Truth About Landslides in Malaysia
Good News: A Gift Of A Healthy Heart And Five More Hopeful Stories
The Golden Era of Cameron Highlands Is Over Because Of Climate Change 
Does Malaysia Need To Declare A Climate Emergency?