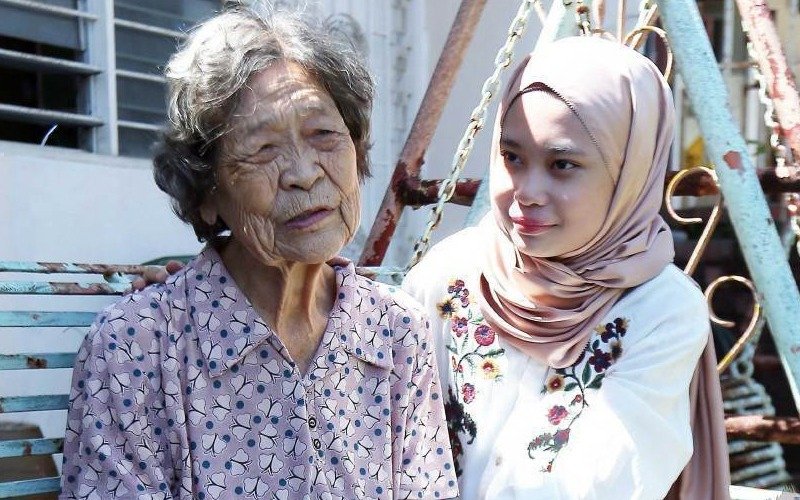 The heartwarming story of Rohana Abdullah and her adoptive mother, Chee Hoi Lan, whom she affectionately called laoshi (Translation: teacher) caught the attention of many Malaysians[1].  Rohana was born to an Indonesian mother and a Malaysian father. However, her father was out of the picture early on. Her mother who was working at a daycare centre left the country when Rohana was only two months old.

Chee Hoi Lan, 83 years old, a teacher at the daycare centre, took Rohana under her wings in 1999, ensured she received appropriate Islamic teachings by enrolling her to Kelas Asas Fardhu Ain (KAFA) and provided her with halal food.

I love her like my own child. Since she was little, I made sure she ate Halal food and performed her worship as a Muslim to this day… I took on the responsibility as her mother, I taught her, nurtured her. The only thing that separates us is our religion and culture. – Chee Hoi Lan, Rohana Abdullah’s adoptive mother[1]

However, Rohana’s life trajectory faced a bump on the road due to her stateless status.

But now, I have a citizenship problem, because my mother is Indonesian and my father disappeared when I was little. I’ve tried applying for citizenship since 2016 and until now, I’ve yet to receive any reply. – Rohana Abdullah[2]

There’s hope on the horizon as the news has reached the ears of Prime Minister, Dato’ Seri Ismail Sabri and the Home Minister, Datuk Seri Hamzah Zainudin. She has since received assurance that the corresponding teams are working to solve her concern.

I am touched by the story of Rohana. I have instructed my officers to investigate the veracity of it before we can make any decision. – Datuk Seri Hamzah Zainudin, Malaysia’s Home Minister[3]

Not An Isolated Case

The National Registration Department (NRD) or the Jabatan Pendaftaran Negara (JPN) has received 31,494 citizenship applications for persons under the age of 21 from 2015 to June 2020. The applications are still waiting for the authorities to seal their fate[4].

Over the years, there has been a lack of developments in the law reformation front. Responding to this issue only when news coverage takes place is no longer the way to go.

We know that her’s [Rohana’s]  is not an isolated case. There are tens of thousands of children and young adults who are in similar situations as Rohana throughout the country and their sufferings deserve equal attention. – Zaid Malek, Lawyers For Liberty head coordinator[5]

Rohana was forced to drop out of school at the age of 16. She continued her studies through private tuition and took the SPM examination as a private candidate. Rohana hit a low point in life after the realisation that her undocumented status was the cause of her exclusion from the Malaysian public school system. Following this, she has been suffering from severe anxiety and at times, a sense of hopelessness in life.

She is unable to open a bank account or utilise e-hailing services and avoided encounters with authorities such as the police. For years, she was denied the fundamental basic rights that Malaysian citizens often take for granted such as education and healthcare services. Rohana had to work informally as a tuition teacher to get some income.

Despite her father’s supposed Malaysian citizenship, the frequently contested existing Malaysia’s citizenship law states that children with non-Malaysia biological mother’s should take on their mothers’ citizenship despite many being born and raised in Malaysia.

A similar story of Nalvin Dhillon, who left school at the age of 15 is still fighting for his citizenship. Nalvin, who had since graduated with a Diploma for Human Resources, struggled to earn a white-collar job due to his stateless status.

There are many many other cases with such sad circumstances. In all stateless or citizenship applications, every single child is innocent. The home minister needs to review the entire policy, amend laws and not look at the cases one by one because every month counts for these children — education, health care and safety! –  Hannah Yeoh, Segambut MP[6]

Being stateless is not an individual choice – not for Rohana, Nalvin or any other person without documentation. The fight for citizenship is an exhaustive journey, Rohana has been fighting for her legal identity since 2016, Nalvin has been waiting for good news for as long as 10 years.

In the recent development of Rohana’s case, the Home Minister has requested supporting documents to prove her father is indeed a Malaysian citizen.

I understand Rohana’s father is a citizen. Therefore, if there are documents to prove this, it would make it easier for us to grant it (identification document). This is a responsibility given to me and it will be done as best as possible. – Datuk Seri Hamzah Zainudin, Malaysia’s Home Minister [7]

Yet, this may provide an obstacle to Rohana’s plea since her father has been missing since her birth in 1999. This particular condition had also plagued many other stateless individuals in their mission to earn their identification documents.

As with time, supporting documents may have been damaged, tampered with or even missing. In 2017, the NRD or JPN  rejected DNA test reports as supporting evidence for stateless individuals with a Malaysian father [8].

The Plight Of Many More Stateless Are Left Unheard

The government’s immediate response to Rohana’s case is not without criticism from activists and MPs.

Can all stateless persons in the country trust the Keluarga Malaysia government to find a permanent solution to end their misery? Or do they need to wait for their time to get media exposure before they receive calls from the prime ministers and the assurance of the home minister? – Teo Nie Ching, Kulai MP[9]

The stateless issue has permeated and repeatedly been debated in parliament. The provided solutions have left a bitter taste rather than resolving the issue of statelessness for good.

In 2018, the leeway of providing stateless children to enrol into schools as long as they could present legal documents (child’s birth certificate, adoption papers or court orders). An impossible undertaking to many who have inherited statelessness[10].

The government also announced a one-year time frame to come forth with legal documentation in exchange for citizenship in 2020. Again, there was a lack of consideration and understanding of the stateless individuals’ circumstances[11].

We are two years away from the goal of the UNHCR #IBELONG campaign that aims to eradicate statelessness would conclude. Thus far, progress has been limited and we have violated a few articles of the Universal Declaration of Human Rights that we have signed that promoted universal basic rights to all in Malaysia.

Perhaps, Rohana’s case would only set a precedent, opening doors to more and more stateless individuals to finally be recognised in the country they were born and raised in.

I also see this issue (identification documents) as one of the ministry’s agenda for this year to reduce the number of those facing such problems. – Datuk Seri Hamzah Zainudin, Malaysia’s Home Minister[7]

The issue of statelessness and the fight for citizenship is an ongoing effort by local and international changemakers. It is a complex issue that deserves more attention because everyone deserves to have their basic human rights met. Read more about the state of statelessness in Malaysia and find a list of changemakers making a difference in this community.